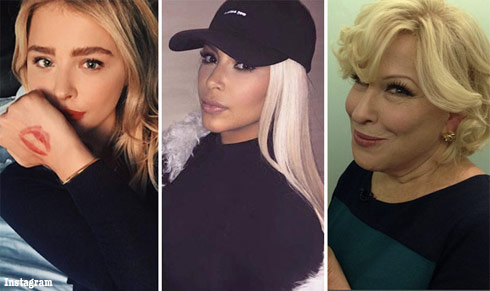 Early yesterday morning Kim Kardashian tweeted out a nude selfie to her gazillion followers. With it being Kim nekkid and all, the share got lots of attention. Among those who had something not so nice to say were celebrities Bette Midler and Chloë Grace Moretz.

Kim Kardashian tweeted a nude selfie today. If Kim wants us to see a part of her we’ve never seen,
she’s gonna have to swallow the camera.

Moretz took a more serious approach as she called into question the type of example Kim was setting for young women:

@KimKardashian I truly hope you realize how important setting goals are for young women, teaching them we have so much more to offer than-

These barbs didn’t go unnoticed as Mrs. West did her best Twitter impersonation of her husband by going on her own rant:

let's all welcome @ChloeGMoretz to twitter, since no one knows who she is. your nylon cover is cute boo

The cover Kim is referencing was from an issue of Nylon Magazine featuring Moretz. We used a pic from that spread as our lead-in image on the post regarding Chloe’s comments, which you can see here.

While she was at it, Kim tweeted the “it’s none of my business” meme of her sipping coffee, then another nude and even railed on Piers Morgan! “hey @piersmorgan never offer to buy a married woman clothes. thats on some ashley madison type s**t #forresearch,” she wrote.

Folks are already speculating that it was Kanye behind the tweets. Even if it was, it’s under Kim’s account, so she’s gotta own it!

Bruce Jenner furious with the Kardashians for publicly discussing his transition