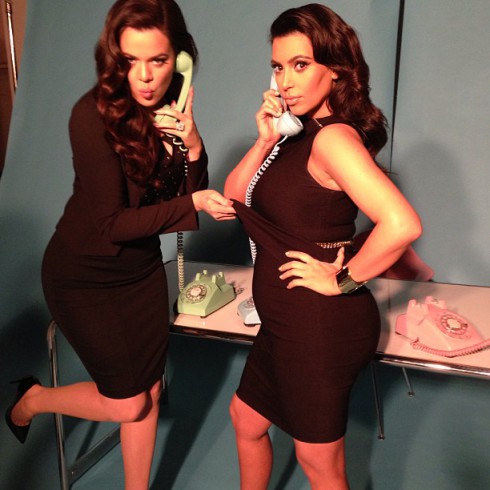 Kim Kardashian revealed she was expecting a baby with her boyfriend of nearly one year Kanye West just last month, and already the Kourtney & Kim Take Miami star is sporting a sizable baby bump, which she showed off today during what looked to be a photo shoot with her younger sister Khloe.

“Well hello there! #PoppedOuttaNowhere!!!” Kim captioned the photo on her Instagram account, which is followed by more than 6.5 million fans. And she’s right — where did that come from? Kim is photographed several times a day, and while there may have been a small hump before, it’s very visible now — which means everybody’s going to be trying to get even more pictures.

Surprisingly, Kim’s baby won’t be seen on any of the Kardashian reality shows. “It’s a tough decision,” Kim told Jimmy Kimmel earlier this week. “From the start, as of now, that’s just a personal choice that Kanye and I have made.. We’re going to try to keep it as private as possible.”

However, she’s not exactly saying “never” when it comes to her child being on reality TV. “When the baby’s old enough, and … he or she decides that’s what they want to do, then that’ll be a decision,” Kim said.

Kim and Kanye will be welcoming their son or daughter some time in July, which is right about the time Kris Jenner’s new talk show is set to premiere! “We could have a nursery on the set and I could babysit,” Kris Jenner said in an E! interview. “What do you think of that, Kim?” she asks while looking into the camera.

For more of Kim Kardashian, be sure to tune into Kourtney & Kim Take Miami which airs every Sunday night at 9/8c on E!

Alanis Morissette opens up about her postpartum struggles