After the multiple molestation accusations against 19 Kids and Counting‘s Josh Duggar came to light last week, parents Jim Bob and Michelle Duggar said they hoped their story would teach others about “the kindness of God.” But their past statements on molestation and incest shows they haven’t always been so kind to offenders.

In the now-expunged police report, Jim Bob said he first learned of the accusations against Josh in March 2002. That same year, Jim Bob ran for the U.S. Senate, partially on the platform that rape and incest “should be treated as capital crimes,” which are punishable by the death penalty in the state of Arkansas. 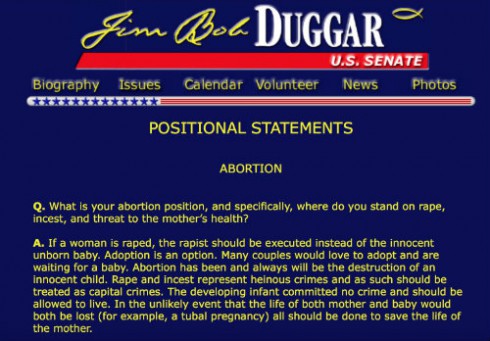 More recently, Michelle recorded a robocall sent to hundreds of Arkansas households. In it, she encouraged residents to vote down an anti-discrimination ordinance because she said it would allow transgender people to “endanger” and “traumatize” kids.

Michelle read the following script in the August 2014 call:

I don’t believe the citizens of Fayetteville would want males with past child predator convictions that claim they are female to have a legal right to enter private areas that are reserved for women and girls. I doubt that Fayetteville parents would stand for a law that would endanger their daughters or allow them to be traumatized by a man joining them in their private space. We should never place the preference of an adult over the safety and innocence of a child. Parents, who do you want undressing next to your daughter at the public swimming pool’s private changing area?

Despite Michelle’s suggestion that all transgender people are perverts who pose threats to women and children, City Attorney Kit Williams said her position was little more than “fear mongering.” He explained, “Transgender people — who are far more likely to be the victims of harassment and violence if forced to use a bathroom that is inconsistent with their gender identity or expression — deserve to have the ability to use the bathroom in peace and safety.” To Michelle’s disapproval, the ordinance passed.

Speaking from prison this week, the former Arkansas state trooper who learned of the accusations against Josh in 2003 accused the family of lying to him about the severity of the situation.

“Josh [said he] had inappropriately touched [redacted] during the time she was asleep. He said he touched her through her clothing and he said it only happened one time,” Joseph Hutchens told In Touch via a lawyer. (He is in prison for unrelated child pornography charges.)

Joseph said he didn’t report it to other authorities because he was led to believe it was a one-time incident, even though Jim Bob later said he knew of multiple incidents by the time he spoke with the state trooper:

I did what I thought was right and obviously it wasn’t….If I had to do it over again, I would have told him immediately I am going to call the hotline and contacted the trooper that worked those cases and have a full report made,” he said. “I worry that something else may have happened. I would be responsible for it, in my opinion, by not reporting it. The young girl should have been my first priority.