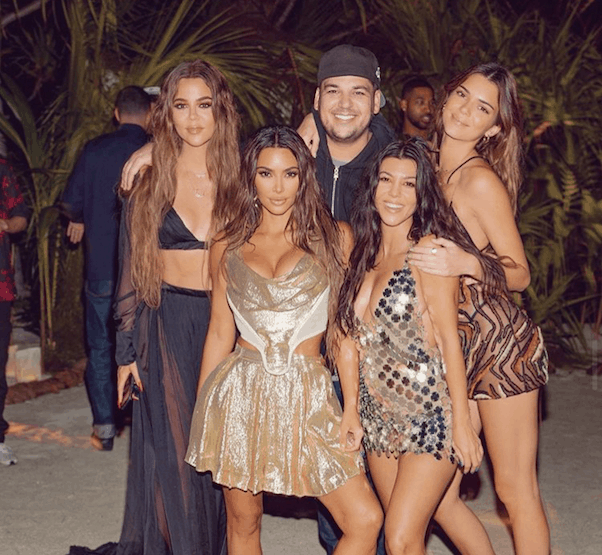 We’re only a couple of weeks removed from Kim Kardashian’s tone-deaf 40th birthday party on a private island. But Khloe Kardashian just gave us every reason to believe the family is set to one-up themselves on the decadence scale.

It seems we should expect Kardashian Christmas Island 2020 for the holidays this year. Yes, that’s right, the family is going to treat itself to its very own deserted island COVID-free getaway. And who knows — Kanye might even be there this time! It’s not like he’ll have governing to do.

Of course, Khloe didn’t come right out and say that. But the clues are all there. And if 2020 doesn’t give us an even bigger eye-rollingly big Kardashian soirée a thousand miles away from any other people in the remote South Pacific, what else are we supposed to mock to close out this terrible year?

It went down like this. The other night, Khloe engaged in a lengthy AMA on Twitter. She answered all manner of questions, took advice on which color Twitter background to use, and even commented on Shane Diesel at one point.

Near the end of the silliness, a fan asked Khloe if the ongoing coronavirus pandemic meant there would be no big Kardashian Christmas throwdown this year.

“I pray not!” Khloe responded. “I think it will have to be way smaller obviously. And I’m totally fine with that! But we’re definitely celebrating Christmas! It will just have to be small and safe. Maybe do rapid testing before 😳”

As a final note, Khloe added, “We have to think of what is safest.”

Here’s a screengrab of the Khloe-fan exchange in full: 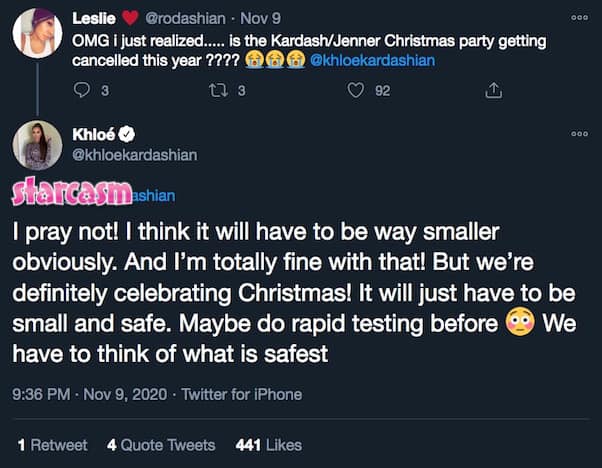 Now, I’ve whiffed on a few high-profile Kardashian guesses before. (Travis Scott’s failure still haunts me.) But if Khloe’s response doesn’t sound to you like the Kardashians are already finalizing the purchase of their very own Christmas Island, then I submit you aren’t listening hard enough.

I mean, maybe by “way smaller” and “small and safe,” Khloe means it will be a family-only party. So, Scott Disick, yes; teenager Scott Disick is banging, no. That guy over Khloe’s right shoulder in the photo at the top of the article? He’s not invited.

The size of the Kardashian Christmas gathering will also depend on whether or not Kim and Kanye have actually separated. And on whether Khloe and Tristan are indeed back on for the third time. Or the fourth? I’ve lost track.

And on that note, one thing is for sure: Tyga’s not invited.

But regardless of the attendees, there’s no reason to doubt that the Kardashians’ version of a small Christmas in a pandemic involves their very own private island. When you’re as rich and as attention-hungry *and* as privacy-starved as they are, an isolated stretch of sand reachable only by chartered aircraft is the only solution to every problem.

It’s only 45 days left till Christmas, everybody. Here’s a little something for those of you getting started early this year: