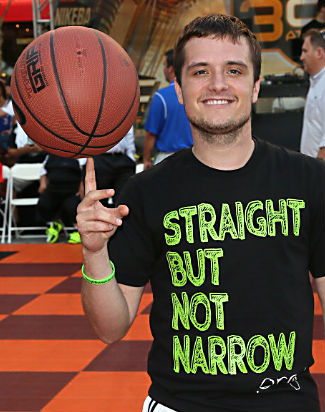 Hunger Games star Josh Hutcherson is using his star power to help LGBTQ in low-income and rural areas get access to technology that will help them connect with communities that support them. In a joint campaign with The Trevor Project, Straight But Not Narrow and human I-T, Power On is asking for donations of laptops, smartphones and tablets through Spirit Day on Oct. 16.

“For young LGBTQ people, it may not be easy to find others like them nearby,” said Abbe Land, executive director and CEO of The Trevor Project. “At The Trevor Project, we know that connecting to a community can lead to support and friendships, as well as reduce the risk for suicide attempts and other high-risk behaviors.”

“It’s awesome to know that it’ll be used to help a young person out there who, before this campaign, wasn’t able to get access to information and resources that could really help them,” Hutcherson said about his involvement. “I’ve always respected the work that The Trevor Project does, and to have an opportunity for Straight But Not Narrow to collaborate with them on a campaign like Power On is exciting.”

Last year Hutcherson spoke out about the fluidity of sexual attraction, telling Out Magazine. “I would probably list myself as mostly straight,” he said. “Maybe I could say right now I’m 100% straight… But who knows? In a f**king year, I could meet a guy and be like, ‘Whoa, I’m attracted to this person.'”