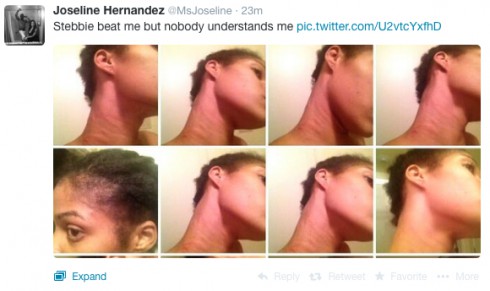 Fans of Love & Hip Hop: Atlanta are a bit confused after star Joseline Hernandez tweeted a series of bizarre photos and messages last night, including numerous graphic photos of injuries she says she sustained after husband Stevie J beat her!

Above is a screen cap of one of the since-deleted tweets that included the words, “Stebbie beat me but nobody understands me.” Here’s another collection of photos shared by Joseline’s Twitter account that was captioned, “Y does he bruise me up Stebbie stop:” 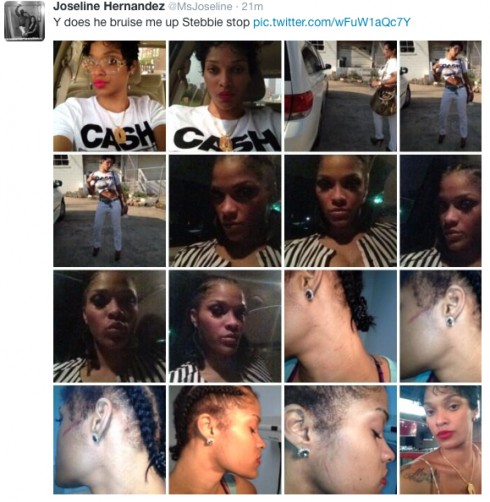 In addition to accusing hubby Stevie J of abusing her, Joseline’s Twitter account shared this next tweet implying that Love & Hip Hop Atlanta producer Mona Scott Young knew about the abuse and wanted Joseline to hide it!

@MsJoseline also posted this photo of a handful of pills along with the message, “Cushin up a line of coke tonight:” 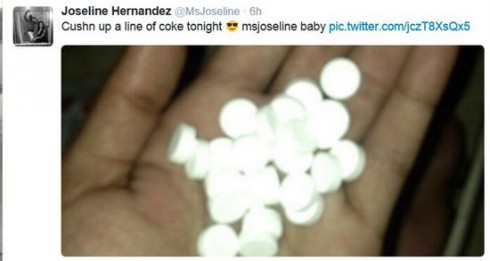 But Joseline didn’t just share controversial abuse and drug photos during the wacky tweetathon, she also posted a couple of boss breakfast photos, one of which was addressed to Anna Benson and apparently features a Versace plate: 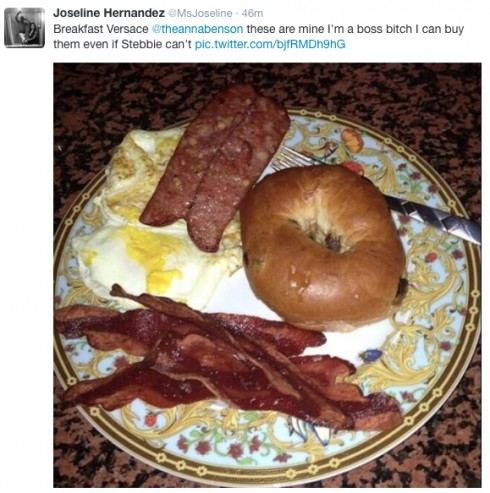 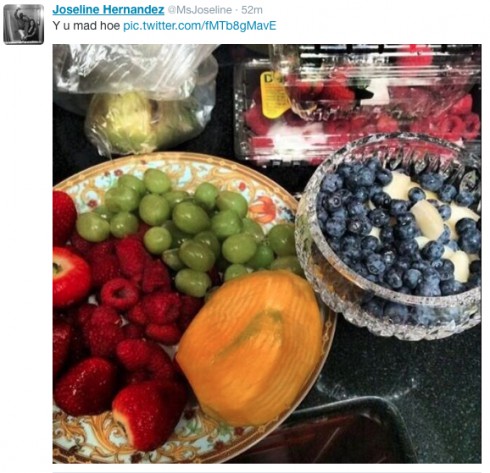 Some of Joseline’s followers began openly wondering if her account had been hacked, and it responded by tweeting, “I’m not being hacked I want the truth come out I have demons in me that need to be released I hate myself even though I say I’m the baddest.” She added this morning, “Sorry I was tripping last night.” She later deleted all the tweets and made no more comments about it.

Stevie J, on the other hand, did offer up his commentary on the controversial tweets:

Someone hacked Joselines account. I'll find you trust me!

I think it’s fairly obvious that Joseline’s account was hacked, with many speculating that perhaps someone found/stole her phone, which would explain how they also had the photos. But, even if her account was hacked and Stevie J didn’t beat Joseline, the question then becomes: who did?!?

And speaking of Stevie J, his Twitter account was relatively silent over the weekend and it might be because he was in jail! Bossip reports that Stevie J was arrested in Crawford County, Georgia on Friday for drug trafficking! An anonymous law enforcement source tipped off the site, and Stevie J’s lack of tweets during the reported time he was behind bars seems to back up the report.

Never a dull moment for the cast of LAHHA — on screen or off!!