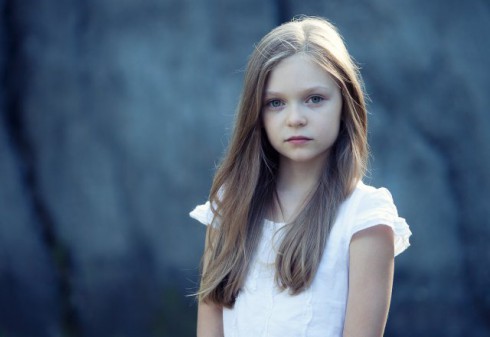 Ten-year-old Ursula Parker steals any scene she’s in on FX’s Louie as his precocious younger daughter Jane, and that’s saying a lot because Louie is chock full of absurd wonder and deep observations. A big part of her presence on the show involves violin playing, and last night included an episode that showcased her talent.

There’s no Hollywood trickery involved, Ursula has actually been playing the violin extremely well from a very young age. She became fascinated with the violin at age two, and was learning to play by age three. “I started with the Suzuki Program, which welcomed younger kids. I was working on one piece for the whole year actually,” she told Vulture. “You start with rulers and pencils and stuff, not even the real violin. For my first concert, it was funny because I was looking at the audience the entire time and at the end my teacher had to drag me off of the stage. I’ve loved performing since I was really little!” She actually got into acting because an agent saw her playing the violin and pitched the idea to her and her parents.

Here she is as five, playing a piece she learned when she was four:

Some more stuff about Ursula:

She has a wide range of musical tastes. “I like all sorts of stuff. I like Vivaldi and Mozart, all sorts of pop music to happy songs to Katy Perry. Everything, I like everything. All sorts of classical stuff and contemporary stuff. I love music, period. I like ancient Greek things now too! I like the Seikilos song. It’s an epitaph. I was actually performing it today with my lyre. It’s the oldest song ever found in the whole entire world.”

Ursula just recently mastered the lyre for her school’s Agora. “I just learned. It’s pretty easy! We also did a movie about the wanderings of Odysseus,” she told Vulture. “It was our project, and I love it. I love ancient Greece. It’s very interesting and mystical. It was almost like a film, actually. I was Athena and Polyphemus, which is a scary cyclops.”

She actually wrote the song she sings to herself in the episode where she’s singing to her stuffed animal. “It’s about basically doing what you’re not supposed to do, because you’re not supposed to jump off a subway. The name of the song is called “What to Do.” He asked me to sing something to the animal and I thought, Oh, I’ll sing my song! I wrote it as a little GarageBand experiment on my iPad. It was definitely not written for the episode.”

Ursula enjoys playing Jane, even if she thinks she’s a bit “insane.” “What in general Jane does is a bit unusual and even a little insane. It makes her sort of colorful, complex, and even mysterious! I love playing her. She isn’t boring and predictable. She’s definitely not afraid to be different.”

She LOVES working with Louis C.K. “A lot of adults always ask me, “What’s he like?” I like him because he has a very clear idea of what he wants. He also pays great attention to detail, which I think is very important. He wears many hats on the show and he’s mostly seriously focused when he works. I love that he does not generally sugarcoat comments. And I like that he doesn’t treat me like a baby. A lot of adults don’t know how to relate to children. They either treat you like you’re 5 or like you’re 50. Maybe because he has his own kids he knows how to relate to us.”

Tig Notaro is getting an HBO comedy special

This is what Louie’s Hungarian girlfriend Amia said to him