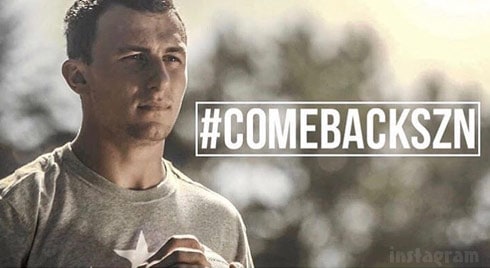 Disgraced former Cleveland Browns quarterback Johnny Manziel sat down with Good Morning America in an interview airing Monday morning to discuss his unhealthy relationship to alcohol and how the highs and lows of his often public benders led to his life spiraling out of control. Manziel is now speaking out about how alcohol led to worsening depression and how he’s making steps to turn his life around.

TOMORROW: @jmanziel2 reflects on 'mistakes' that got him 'out of the NFL' in an exclusive interview with @tjholmes. https://t.co/gZfdnK5Ybz pic.twitter.com/EoglCYo8ZN

“I was self-medicating with alcohol because I thought that’s what was making me happy and help me get out of this depression to a point where I thought I had some sense of happiness,” Manziel says to T.J. Holmes in a preview clip.

“But at the end of the day when you wake up the next day after a night like that, or after going on a trip like that, and that’s all gone? That liquid courage or that liquid sense of euphoria that’s over you is all gone,” he reflected. “You’re left staring at the ceiling by yourself and you’re back in that depression and back in that hole, that dark hole sitting in a room by yourself thinking about all the mistakes you’ve made in your life. What did that get me? Where did that get me except out of the NFL? Where did that get me? Disgrace?”

Manziel in 2016, during the peak of his partying.
Embed from Getty Images

Manziel attributes much of his new outlook on life and desire to focus on football again to his fiancée of almost a year, model Bre Tiesi.

His last relationship, to Colleen Crowley, ended with a nightmare of domestic violence January 2016 after a night of partying. Manziel has a plea deal settlement with Crowley over allegations of hitting, kidnapping and death threats. Crowley claimed that he hit her so hard she lost haring in one ear. He denied the allegations and even smirked in his mug shot taken for the case.

Here's a first look at Johnny Manziel's mug shot. He turned himself in & posted bond in his assault case today. pic.twitter.com/mNZKqZEGRY

A year later, January 2017, Manziel made a dig at his ex on Snapchat after seeing her at the same nightclub where he was partying with members of the Giants and Justin Bieber, potentially violating her restraining order against him in relation to the case.

He quickly deleted the Snapchat post that jabbed her having enough clout to get into the nightclub without him. “She knows LIV on Sunday is church! Pfff surprised she was even able to get in without me,” he wrote in the snap.

Over the past few months Manziel’s social media has not been riddled with hard partying at exclusive clubs, but instead focused on his hopes of a comeback narrative. He seems to be focused on more longterm goals than the quick, out of control high of a bender.

“I am trying to come back where I can get to a point to step on a football field in whatever capacity that is after taking two years off after hitting a really rough and rocky patch in my life where I felt like I had to go through certain things to come out the back way to where I am at today,” he explained to GMA.

Less than two months ago Manziel got the ok to join the CFL, Canadian Football League, but the Heisman Trophy winner is hoping for an NFL comeback in the U.S.

Maybe I don’t have to prove the world wrong. I just gotta prove myself right #ComebackSZN

Kim Richards on looking inebriated in Paris – did she relapse?