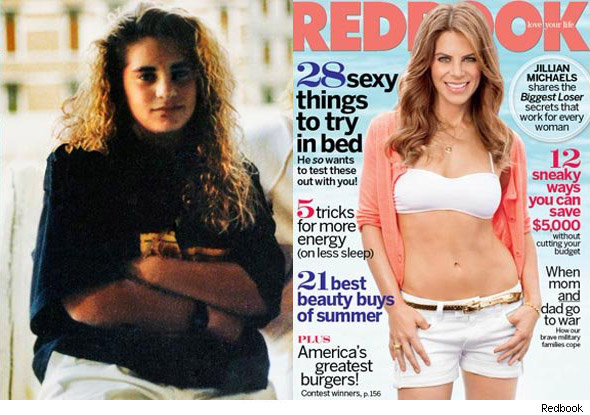 You wouldn’t know it from watching the svelte and boisterous Jillian Michaels whipping people into shape on the immensely popular Biggest Loser reality show, but this 36-year-old trainer from hell was once an overweight and troubled teenager.

Jillian opens up about her past in the July issue of Redbook (on stands June 22) in which she talks about her troubled childhood that began at a very early age.

“I was a really disturbed kid,” she tells the magazine. “You know how kids have night terrors? Mine were really bad. I thought sharks were coming out of the drain in the bathtub. I couldn’t sleep at night, every night, waiting for aliens to come. I’m not kidding you: I. Was. Traumatized. And mom got me into therapy.”

It seems the description “trainer from hell” has more than one meaning for Jillian! She goes on to describe her rough childhood years: “Being big as a kid was pure hell,” she says. “I spent all of eighth grade in my classroom because God forbid I ever left. I was terrorized.”

Jillian’s weight issues began at the age of 12 when her parents got a divorce after 18 years of marriage. She says that her parents were “midlife-crisis-ing” and that she felt as thought she had become an afterthought. Her weight reached 175 pounds and she began to have anger issues before she was introduced to martial arts.

“Karate saved my life. It all stopped the day I broke two boards with a kick,” says Michaels. Her passion for martial arts lead her down the road to eventually becoming a personal trainer and applying for the Biggest Loser job at the age of 30. Now, the world is Jillian’s overweight oyster!

She made it a point to make a distinction between the aggressive b!tch we see on screen and the real Jillian, explaining that, “I really don’t have a mean bone in my body! Do you know how easy it would be to tell people what they want to hear? It would be heaven! But, unfortunately, it doesn’t get the job done.”

But no matter how successful she becomes, Jillian will always be a bit haunted by those demons she encountered when she was young, and to this day she still hasn’t attended a single high school reunion for fear of meeting up with those bullies who caused her so much suffering.

“Honestly, that’s why I’m always with the underdog, because I’m always avenging that underdog part of myself,” she explains.

Jillian can not only be see on Biggest loser, but she also has her own television show called Losing It With Jillian and a series of workout DVDs. She is also the author of a number of books and spokesperson for Jillian Michaels Maximum Strength Calorie Control.

Jillian Michaels is almost a mommy