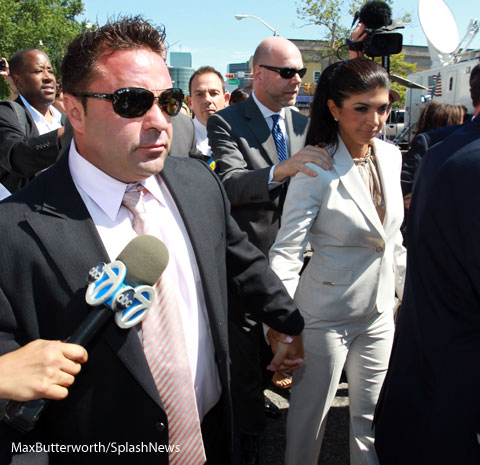 The couple arrived at the Martin Luther King, Jr. Courthouse in Newark, N.J. to a swarm of media. According E! News, Joe got into a slight altercation with a paparazzo. “At one point, Teresa’s hubby even slapped a photographer’s camera, prompting a warning from his attorney not to do that.”

Teresa’s lawyer has said that she will plead not guilty, but Joe’s lawyer has so far failed to comment. They were able to leave the courthouse after being freed on $1 million bond ($500,000 each.)

Prosecutors claim the Giudices falsified W-2s, bank statements, and income tax returns to make it look like they made more money than they did to get $4.6 million in mortgages, home equity credit withdrawals, and construction loans in the years prior to being cast on The Real Housewives of New Jersey. After they were received some success from The Real Housewives of New Jersey, they filed for bankruptcy. The court alleges that when they filed for bankruptcy they hid some of their assets from the bankruptcy court.

They are facing up to 50 years in jail.