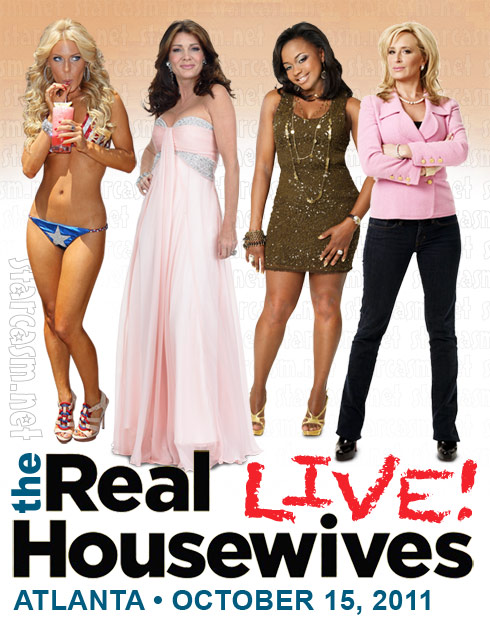 Bravo announced earlier today that it will be launching a three-city “Real Housewives Live Tour” that includes stops in Atlantic City, Chicago, and Atlanta. The traveling drama circus will feature cast members culled together from various cities on stage where they will “discuss the most talked about moments, reveal cast secrets and answer questions straight from the audience.”

“Bravo viewers like to truly engage in the shows they are passionate about,” said Ellen Stone, Senior Vice President of Marketing for Bravo. “With ‘The Real Housewives Live Tour,’ we are able to give our fans a unique, hands-on experience with their favorite cast members across franchises that they can’t experience anywhere else.”

There will be a matinee and evening show in each city and ticket prices will range from $49.50 up to $170.00 for the “Red Carpet Experience Package,” which includes:

Here is the schedule with the line-ups for each city, although the Bravo press release points out that the names of those appearing are subject to change:

I’m as big a Housewives fan as there is, but I have to confess this seems a bit conceited. $50 to sit with 3,000 other people watching what amounts to an unedited Reunion Special featuring four women that have no history together? I dunno. But, just for the sake of remaining positive, I’m going to continue this post pretending the ticket price is only $5…

This is awesome! Although the press release made no mention of his name, I sincerely hope Andy Cohen is hosting these! Without him moderating my enthusiasm level would probably drop more than half. (Even at $5 I still managed to get unmotivated)

So if you could only go to one show which would it be? For me the choice is pretty obvious. I realize that the Atlantic City show probably has the biggest names, and Atlanta has the X-Factor potential of Mama Elsa being present, but I don’t think any of that compares to the chance of seeing Lisa Vanderpump and Phaedra Parks on the same stage!!! Talk about worlds colliding! And all four ladies seem like they would be genuinely entertaining and fun outside of the Real Housewives context, don’t you think?

Even though, as Phaedra would say, “everybody knows” Chicago is the best, let’s put that theory to the test with a poll! Which show would you attend if you could only attend one?