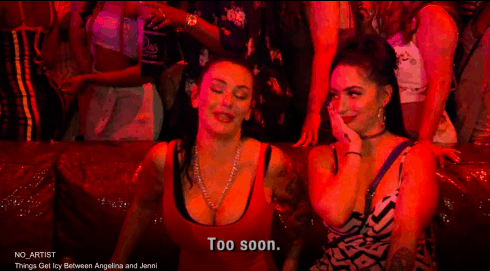 Last week the dramatic entrance of Angelina Pivarnick on Jersey Shore: Family Vacation 2 seemed to the lighten up the mood after all the dark relationship drama Ronnie has been going through. Although Nicole “Snooki” Polizzi seems to have put aside any beef she’s had with Angelina, Jenni “JWoww” Farley still hasn’t buried the hatchet. Why don’t JWoww and Angelina get along? The answer lies somewhere in a complicated mess that goes back a decade.

Although Angelina had a brief, tumultuous stint with the cast members in the very first season of Jersey Shore, the real trouble with Angelina happened in 2010 when Angelina told Snooki and JWoww she caught Ronnie cheating on his then-girlfriend Sammi “Sweetheart” Giancola. At the time Angelina said she didn’t feel it was “her place” to inform Sammi what was happening behind her back, so Snooki and JWoww wrote Sammi an anonymous letter.

Huge fights, both physical and verbal, broke out between the group after the contents of the letter became public. JWoww and Sammi got into a brawl and Snooki and Angelina also got into a physical altercation.

JWoww recently told Refinery 29 that Angelina’s actions during that time “still haunt” her eight years later. JWoww felt that become of Girl Code, Sammi derived to know what her roommates knew about her relationship. Her close friendship with Ron, however, made it hard for JWoww and she felt awkward because she actually wasn’t the one who saw him cheat. “But at the end of the day, if one of my friends is doing something wrong, I will always have a problem with that. I actually never saw it — Angelina did. This is why we have… had a problem.”

Angelina never really had good relations with the cast. During the very first season she left after only 3 episodes and her return for the second season of the show ended with the entire house in chaos. She exited after her altercation with Snooki.

Angelina, an EMT and self proclaimed “Kim Kardashian of Staten Island,” is still up for the challenge of being accepted by the group. She showed up for Season 1 of Jersey Shore: Family Vacation and even JWoww warmed up to her a bit. However, Jenni JWoww made it clear that she did not want to film with Angelina, but instead wanted to get to know her more off camera.

Afterwards, though, the pair had a social media tiff. To promote her televised return to the show, Angelina posted a now-deleted image of a mug featuring the words “Jersey W**re.” Although that could be a joke, Angelina fired barbs at JWoww in the caption. “I will be sipping my TEA out of my amazing cup I dedicate to @jwoww #IMBACK #KEEPHATIN #jealousyisadisease.”

Deena Nicole Cortese commented her confusion at Angelina’s aggression. “Omg you left the house wanting to make amends with everyone,” she wrote. “I’m confused with this post.. why start silly drama over insta?”

JWoww also had a response: , “Who’s following who?! Jealous of what? Your third engagement or third chance in the house? You want me to show u the door … again #statenislanddump.”

Because Angelina seemed fine with getting to know JWoww and the cast better off camera, and then started up a fight on Instagram, JWoww was not really pleased when Angelina waltzed back into the show on Season 2 of Jersey Shore: Family Vacation in Vegas.

Angelina and Snooki are currently cool with each other because they got drunk together and realized they got along really well. As for JWoww, tonight’s episode proves she’s trying really hard to get in JWoww’s good graces despite how annoyed JWoww still is with her.