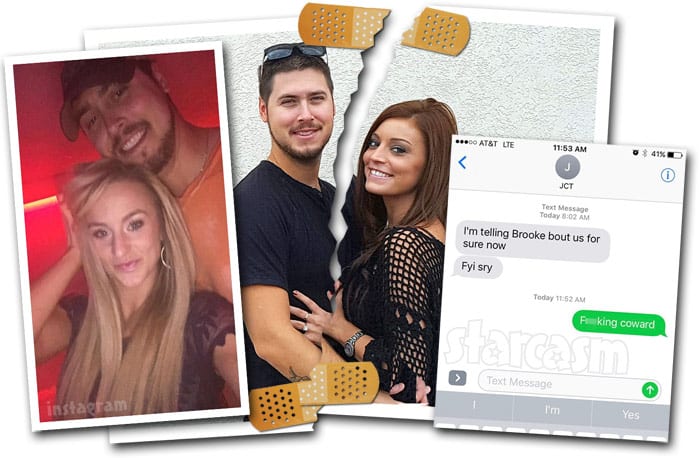 Leah Messer’s professional pipe layer ex Jeremy Calvert appears to have been laying his pipe where he shouldn’t as his newest ex, Brookelynn Wehr, is accusing him of repeatedly sleeping with her best friend while they were together! And all of this gets aired online just after Leah posts photos partying with Jeremy!

OK, we will approach this drama explosion chronologically. Yesterday, Leah posted two photos with Jeremy on Instagram — which clearly showed the former couple doing a little more than co-parenting: 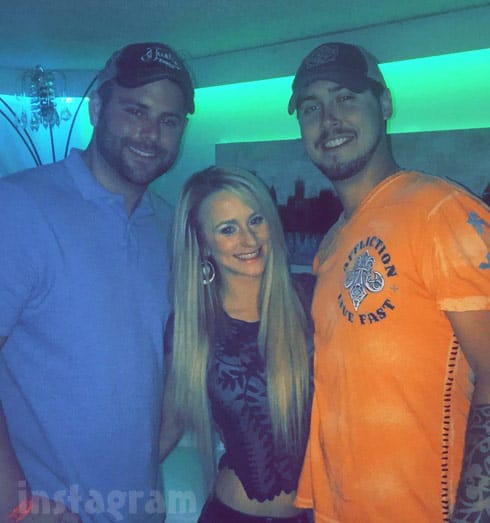 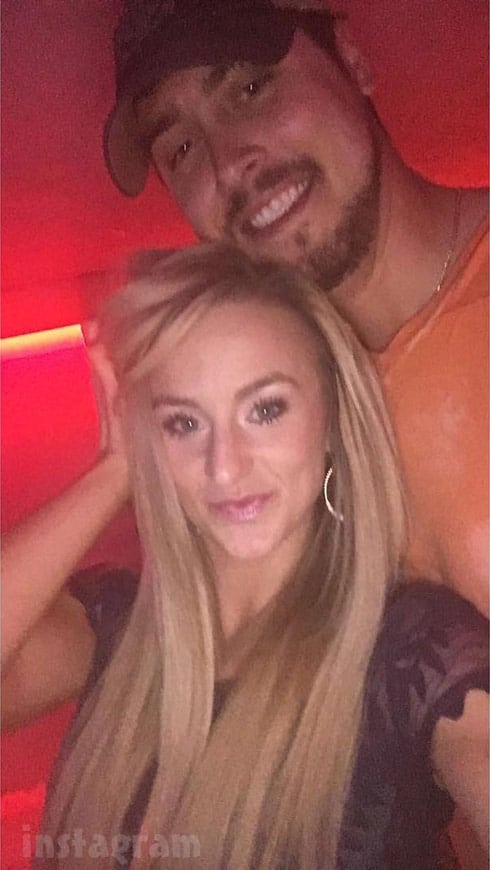 The photo of Leah between the two fellers was posted first, and Leah captioned it with “#Goodtimes???” Seemingly knowing that the next photo with Jeremy would blow up the Teen Mom 2niverse, Leah captioned it by writing “Just a little fun, that’s all!!!! ????” Leah later indicated that they were celebrating her 25th birthday, which was on the previous Monday, April 24.

Fast forward four hours and Brooke posts a screen cap of an alleged text message conversation between Jeremy and her (former) best friend Leeannn in which Jeremy states that he is going to inform Brooke that he and Leeann were sleeping together while he was with Brooke. (Did you follow all that?) OK, here’s the photo followed by Brooke’s rather irate explanation in the caption: 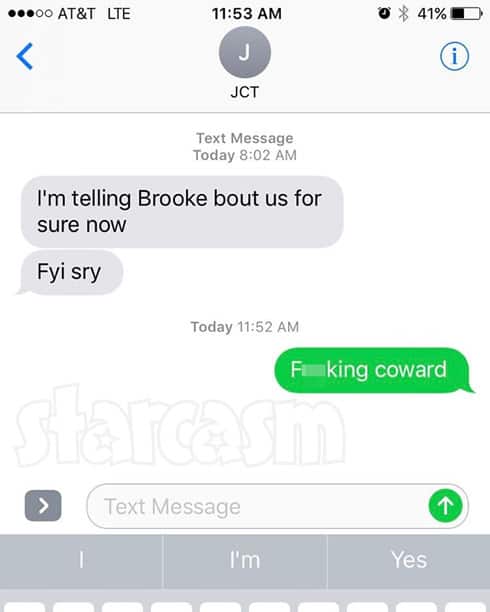 Here’s part of the truth since everybody wants to call me a liar and cheater and everything else. Here’s a screenshot between my best f**king friend leeann and jeremy who had been hooking up behind my back the whole f**king time we were together. Sucks that I just found this out. These two sorry excuses for human beings are literally the scum of the earth ?? @leeannchappell

Brooke rseponded to a few commenters, including some that were curious how in the world she got the screen cap in the first place:

COMMENTER: You don’t have to explain yourself to anyone.

BROOKE: nope but ppl need to know the truth about them both

COMMENTER: But he got mad at Leah for cheating???

BROOKE: exactly when he did it worse

COMMENTER: Who sent this screenshot to you? Him or the other girl? I’m confused.

BROOKE: they sent it to me today now that it’s finally coming out

COMMENTER: Makes no sence to just send that Brooke if u made that up to post I think ur the scum of the earth lol to make urself not look like a wh0re

BROOKE: I did not make anything up . She sent this to me this morning after he texted it to her. Then she panicked and came clean. Then he did.

I am always a little leery of screen capped text messages because they are so easily forged. I’m not saying that Brooke is making anything up, but it would certainly help make her case if she had some deer cam footage to back up her claims. 😉

The brutal cheating allegations made by Brooke are just the latest in what has surprisingly become one of the franchise’s most publicly explosive relationships. Just this year the two broke up before reconciling — only to break up again, with Brooke accusing Jeremy of sleeping with Teen Mom 2 producer Mandi and “about 1,000 other people.” (The Ashley later reported that the Jeremy & Brandi hook up never happened. She could not confirm one way or the other on the 1,000 other women.)

So, are Leah Messer and Jeremy Calvert back together? Who knows?! Jeremy has always claimed that he never wanted any of the attention that being on the show has gotten him, but it sure seems like he has begrudgingly become a fan of the limelight — if only to complain about it. Speaking of which, I’m guessing we will see some sort of video from Jeremy soon addressing all of this, much as he did with MTV editing during the past season.

UPDATE – Jeremy has since talked with The Ashley and explained errything. He says the text message between him and Leeann is real, and that they did hook up, but he explains that is was from last winter when he and Brooke were not together. “We did it one time and it was over,” Jeremy clarifies. “Afterward, Brooke and I got back together and it was kind of awkward, so [Leeann] and I kept our mouths shut.”

Jeremy says he and Brooke split amicably in February, but that they were texting again recently and there seemed to be the potential of a reconciliation, but the photos with Leah ended all that.

So what about those photos with Leah? Jeremy says that was just a random thing. He was hanging out at a bar when a large concert in Charleston let out. “After the concert, everyone started coming into the bar including my friends and Leah and her friends,” Jeremy tells The Ashley. “It wasn’t planned or anything, it just happened we went to the same place. So everyone told us to take a picture together. So we did and we posted it.”

Jeremy points out that it was nothing out of the ordinary. “I was single, so I didn’t see anything wrong with taking an innocent photo with my ex-wife,” he says. “We have a child together, and we’re not going to start screaming at each other or anything. We get along and we act like mature adults for our kid.”

So, just to be clear, are Jeremy and Leah dating — or entertianing the notion? “Me and Leah are not back together, we’re strictly friends,” Jeremy insists. “If I run into my ex-wife, we’re going to act like mature adults for the sake of our child. If people don’t understand that they can kiss my ass.”

UPDATE – Brooke has since responded to Jeremy’s admission and seems to be shifting her anger towards her BFF.