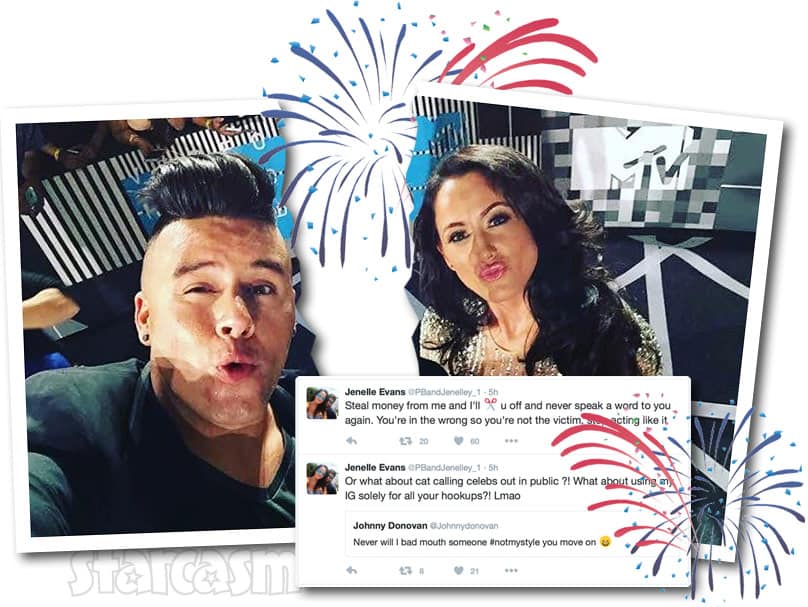 Two times you know there are going to be fireworks are the Fourth of July and any time Jenelle Evans ends a relationship — and this week had both! Although Jenelle and David Eason are still going strong, she did end her business relationship with manager Johnny Donovan over the weekend, and of course the fallout spilled over to social media.

The whole thing started with a Facebook post by Johnny Donovan announcing he and his agency were no longer representing Jenelle:

This post is to let everyone know we no longer represent Jenelle Evans from MTV’s Teen Mom 2 and No longer over view her social media or Business Inquiries. We wish Jenelle and her new team the best in her future endeavors! Please contact Jenelle personally to inquire on all or Jennifer@thestarglam.com

UPDATE – Here is the original unedited post made by Johnny:

Since I haven’t had a voice of reason or time to let anyone know, This post is to let everyone know we no longer represent Jenelle Evans from MTV’s Teen mom 2 and No longer over view her social media or Business Inquiries. We wish Jenelle and her new team the best in her future endeavors! Please contact Jenelle personally to inquire on all.

I mean we can discuss why if we truly want to… This was my decision… Johnny begged me not to go. This was his fault. Get your facts before pointing fingers my friend. 🙂

We reached out for comment and Johnny informed us that “No story has to be written on this. It was her decision and she plans on overseeing her business ventures moving forward.” It seems we weren’t the only ones curious as to what happened, because Johnny shared this tweet this morning:

Never have I ever seen so many people be so nosey ?? #have a good week

That was followed by Johnny letting everyone know he wasn’t going to talk bad about a former client:

Never will I bad mouth someone #notmystyle you move on ?

Johnny’s journey on the high road was short lived, however, as he later retweeted someone that had exed out Jenelle’s photo from the list of clients on his website:

As you might have guessed, Johnny’s passive aggressive high road trippin’ got Jenelle riled up, and she vented back by calling Johnny a “groupie” who doesn’t know what he’s doing and claims that he used her Instagram for hookups. Oh, and she implies he “stole” money from her too: 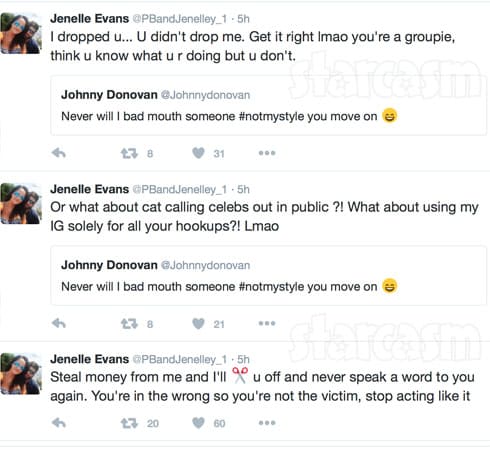 It seems that word spread fast about the Johnnelle split because Chelsea Houska’s dad referenced it in a Twitter interaction earlier today. Someone asked Dr. Randy if he had seen a recent article shared by Jenelle’s Facebook page that suggests Chelsea is currently pregnant, and Randy replied: “I don’t read anything posted by her, she blocked me long ago.” And then he tweeted:

[You might recall that Johnny and Chelsea had their own very public falling out after Johnny tried to claim that he and Jenelle came up with the ideas for a reality star to have a website and sell cosmetics.]

Something tells me there will be more info about Jenelle and Johnny’s falling out soon, so stay tuned!