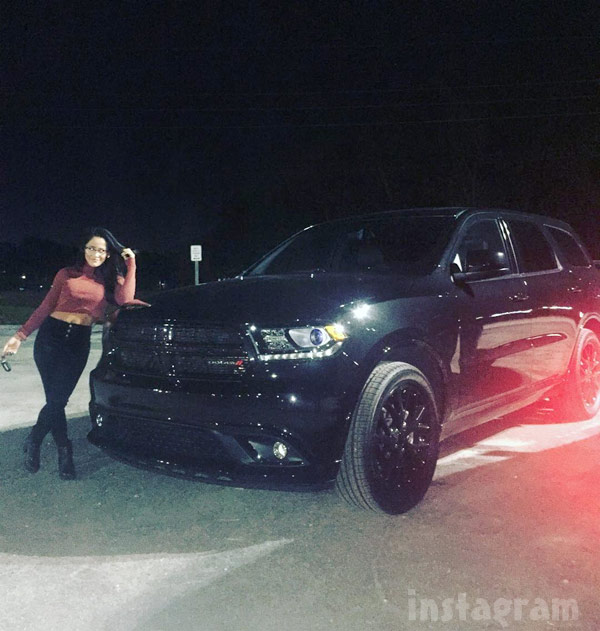 Jenelle Evans is a busy woman! The Teen Mom 2 star has had a jam-packed couple of weeks that included a 911 incident involving her mom, a vacation and plastic surgery consultation in Florida, having her car “stolen” from the airport’s long-term parking when she got back, filing criminal charges against her ex Nathan Griffith, multiple trips to the hospital, and preparing for the launch of her brand new website on Monday.

Things didn’t slow down this weekend, either, as Jenelle went shopping for a new ride to replace her “stolen” whip. The result was Jenelle driving home in a rather intimidating new Dodge Durango SUV! She shared the photo above on Instagram and made sure folks knew that Nathan’s auto snatching was not a big deal with the caption: “It’s all good, I’ll live. ???”

A number of commenters were perplexed by how Jenelle was able to afford such a nice vehicle, so we put together this little flow chart to illustrate exactly how that happened:

Meanwhile, Jenelle has managed to spark a feud with another controversial reality TV star who seems to have the same business model, Vanderpump Rules‘ Jax Taylor! From what I can tell, the whole thing started when a Twitter user suggested that Jenelle’s new boyfriend, David Eason, looks like Jax. Jenelle responded by revealing she has no awareness of Vanderpump Rules at all:

@PBandJenelley_1 Your boyfriend looks like Jax from Vanderpump Rules ?

I don't even know what show that is lol https://t.co/NOV3VWptc6

That kicked off this series of tweets, including Jax:

A show about girls trying to get pregnant at like 14 to be on a tv show? Yeah I'll pass no offense

I don't understand the disrespect ?! https://t.co/9gyudLqgoX

At the time of this post, that is the end of the “feud” between Jenelle and Jax. 🙁

Meanwhile, in other Jenelle Evans news… She isn’t the only Evans with a new car! Her son Jace is building his own set of wheels in the form of a Pinewood Derby racer:

Also, Jenelle revealed to fans that when her website JenelleLaurenEvans.com launches on Monday, one of the things fans can expect to see soon is her take on the controversial Netflix docuseries Making A Murderer:

Watching #makingamurder … Only on episode one and this is insane. I totally understand how this man was treated!!! Blog next week. ??

That should be interesting!