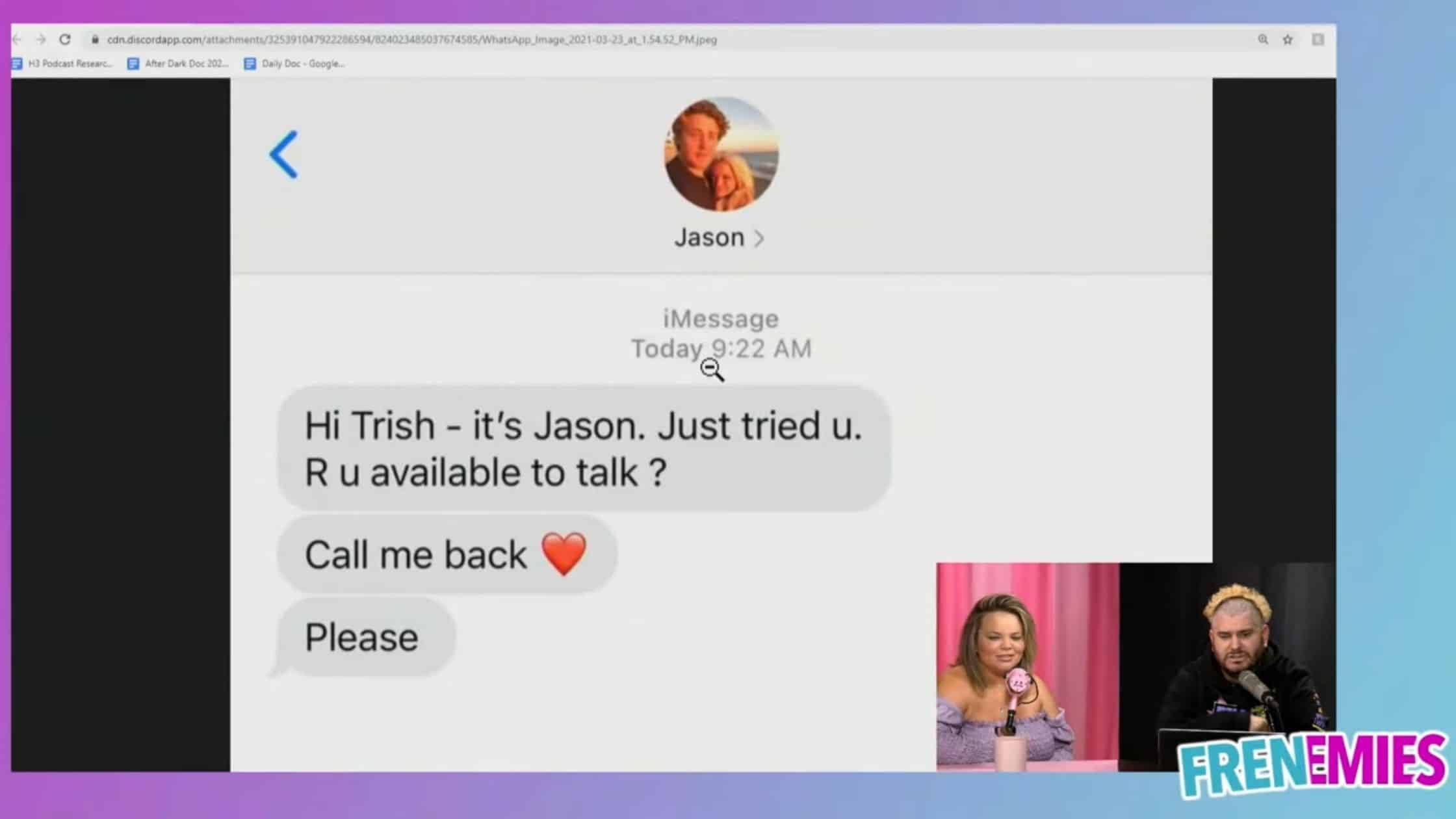 During Tuesday’s two Frenemies podcast response to the David Dobrik apology, Trisha Paytas let it slip that her ex-boyfriend, and close associate of David, Jason Nash has been trying to get in touch with her. The live chat asked Trisha to elaborate, so she obliged. Trisha says Jason, who has not spoken to her in years, tried to call her multiple times. When she did not pick up, he sent her text messages and Instagram DMS, which she did not respond to either, but shared on the podcast.

The multi-part text reads as follows:

Call me back ❤️

Trisha and her Frenemies co-host Ethan start talking about Jason’s attempts to contact Trisha at the 34:29 mark of the video below.

Ethan proceeds to go off on Jason for adding the emoji flourish to his texts to Trisha. “The f**king heart,” Ethan says. “The balls on this guy to send you a heart after all this time. You’re engaged.”

Trisha explains that after her 2019 breakup with Jason and Trisha’s 5150 involuntary psych ward hold, Trisha “begged and pleaded for Jason to talk to me, for David to talk to me and they just completely blocked me. They knew all my s**t I was going through. Jason strung me along for like a couple of months after we broke up or whatever, but then like completely blocked me after my second mental hospital stay.”

“I begged them to be my friend, they ignored me for two years, discredited me, called me crazy,” she goes on. She then points out that David’s lawyer recently told Business Insider that Trisha had been stalking and harassing them, but Trisha points out that she has not called or texted them in years and did not even respond to Jason’s attempt to reach out. 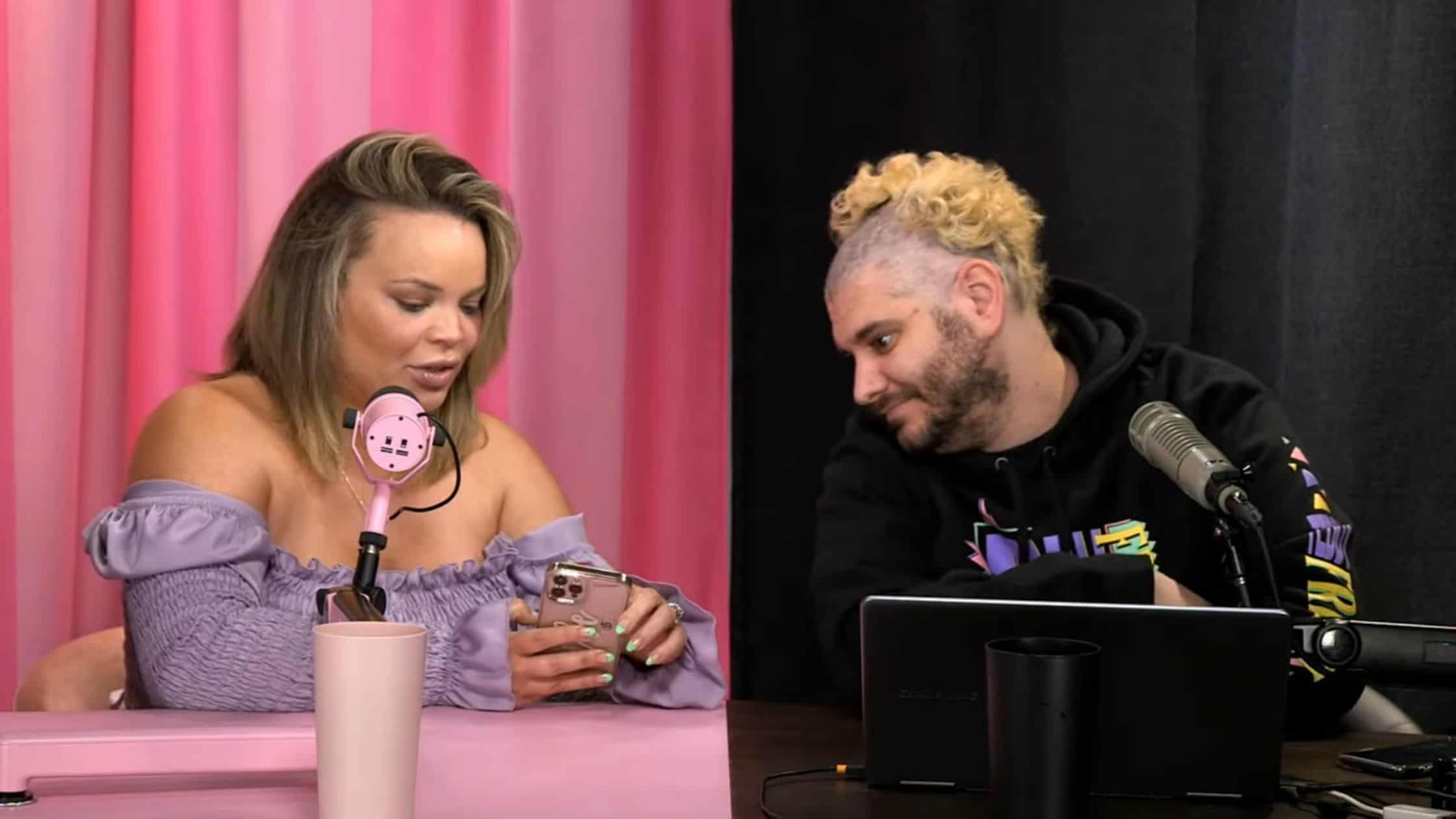 Tuesday actually saw two Frenemies podcasts. One was a prerecorded breakdown of what went down with Jeff Wittek a few days ago, and the second was an “emergency” livestream to address David Dobrik’s apology.

Wednesday the social media star paparazzi channel Hollywood Fix recorded Jason Nash (47) and his rumored girlfriend Rachel Velasco (23) in a heated public argument in Jason’s Tesla. At one point Rachel is visibly upset with Jason, and at another point, his head is on his steering wheel. The interaction ends with Rachel getting out of the car and sitting by herself in a public area.

UPDATE March 27, 2021 Trisha Paytas released a video titled “ok, Jeff” confirming that Jason Nash and his girlfriend broke up. Trisha did not name the girlfriend but stated that she was 23-years-old, which is the same age as Rachel Velasco. She says the woman contacted Trisha and told her that Jason told her he was going “going to text my ex again, and this will all stop.” Of course, that’s not what happened at all since Trisha did not respond to his attempts to contact her.

Trisha claimed that the girl met Jason when she was 21-years-old, and that Jason is seeing multiple girls. She also revealed that Jason told the girl who reached out to Trisha that he would marry her when she turns 26.