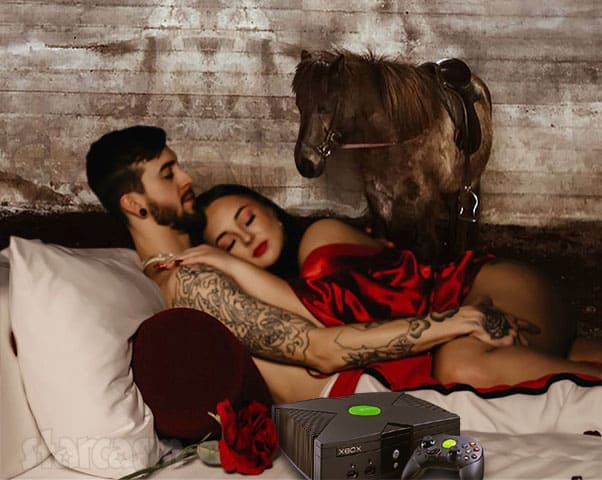 Teen Mom 2 couple Jade Cline have had more splits than a national cheerleading competition. Apparently they have had even more reconciliations. Exactly one more. In other words… “Two, four, six, eight, who did reconciliate? Jade and Sean!”

Rumors began to swirl that Sean had once again flip-flopped from Jade’s most hated human to her forever soul mate after she posted a series of racy boudoir photos in the bed with Sean. “Loving you has always felt so right,” Jade captioned an image of herself wearing red lingerie and laying on a shirtless Sean.

“I’m so proud of you…” Jade continues. “You’ve proved people who’ve made mistakes can change, evolve, improve, and learn. It hasn’t always been easy but it’s always been worth it. Cheers 🥂 to us and forever.”

The above photo has been slightly edited in Photoshop as a parody referencing Kail Lowry’s infamous Icelandic horse barn maternity photo and Sean’s true soulmate, his Xbox. Here is Jade’s post with the original photo that hasn’t been Photoshopped (by us):

After posting the photo above, Jade did a Q&A with fans in her Instagram stories, which included additional pictures from the bedroom photo shoot.

QUESTION: How long have y’all been back together!?

JADE: A while. I just keep my personal life private on social media. We lived separately for a while and I think that definitely helped us both. We both really worked on making our relationship healthy and better. At the end of the day we love each other so we both didn’t want to give up on our relationship.

QUESTION: What are some things you that your bby ddy changed on that helped your relationship?

JADE: He loves himself more and is living such a happy life. It’s hard to love others correctly when you [aren’t] loving yourself.. now he is always smiling, has Multiple GOOD friends, & he’s following his dreams ❤️

JADE: LOL everyone keeps asking this… we don’t want more kids anytime soon. We both are focusing on Kloie and our careers.

#TeenMom2 Jade Cline says she wants to adopt her next child. "I have so much love to offer and really want to give a child an amazing family and an amazing life," she said in part. https://t.co/dPo11T0dwv pic.twitter.com/CklSSZjYYi

QUESTION: So you plan on marrying Sean?

JADE: Who’s to say we haven’t already tied the knot?

[Scroll down for info on whether or not Jade and Sean are married.]

And another exchange with Jade in the comments section:

COMMENT: Stop doin all them shows on tv just to be on ig so called in luv again Smfh 🤦‍♀️

JADE: You people don’t realize how old that sh*t is??? It honestly makes me laugh. Last episode that aired was Over a year and a half ago. A lot changes in a year and a half. We have a beautiful daughter and we love each other. That’s all that matters. We’ve grown and became such better people. I’m not in your relationship so why be in mine?

Here are some screen caps of Jade’s comments, as well as a photo of her and Sean practicing for OnlyFans:

If you’re thinking that Jade looks a little different in these revealing pics, that’s because she had a Brazilian butt lift earlier this year. She started posting post-op photos on Instagram, and she talked about her decision to get the BBL during an episode of her short-lived Jay & Kay Unfiltered podcast.

“I saw so many people I knew that were having BBLs, and I was so impressed and astonished at the shapes of their bodies,” Jade said. She admitted that the procedure and recovery “was a lot of pain” and “the journey had a lot of unexpected turns,” before she added that “some crazy stuff happened.” She didn’t explain any further, but assured Teen Mom 2 fans they will know more soon. “MTV documented all of it, so you guys will see.”

On February 10, Jade shared a recovery update. “I’m a little over three weeks out from my surgery. Still swollen and pretty sore but healing up well. People keep asking me if I’ve lost weight and that’s not really the case. I had some fat transferred so my weight is still around the same. It’s just proportion [sic] differently.”

PHOTO #TeenMom #YoungAndPregnant star Jade Cline posts and deletes a bathroom mirror booty selfie that includes what looks to be a line of white powder, a rolled up dollar bill, and a rigid ID card together on the counter: https://t.co/MwarNdIFal 🤦‍♀️

If Jade posing for a boudoir photo shoot sounds familiar, that’s because she previously did one back in 2018. “I’m loving the skin I’m in!” pre-surgery Jade boasted at the time. “I’m not a size 5 anymore and that’s totally okay with me. I learned to love me for me.”

Getting back to Jade’s Q&A… Are Jade and Sean married? I checked Indiana court records and there is no record of a marriage license or marriage certificate for the couple as of the time of this post. That doesn’t mean they couldn’t have tied the knot in another state though. Of course, I think that fact that Jade suggested they might be married is a very clear indicator that they haven’t. Producers would have wanted to keep that a secret I’m sure.

A new season of Teen Mom 2 has been confirmed, but MTV has yet to reveal a premiere date.

As Jade mentioned, the last season concluded with footage from a year-and-a-half ago, so the show is falling way behind. And, of course, the COVID pandemic only served to slow down production even more. Could it be that Jade’s surgery and recent events are more than one season away?

PHOTO Are Maci Bookout and Ryan Edwards back together?

Jenelle gets restraining order on David Eason, flees the state; he’s not allowed to contact her or the kids