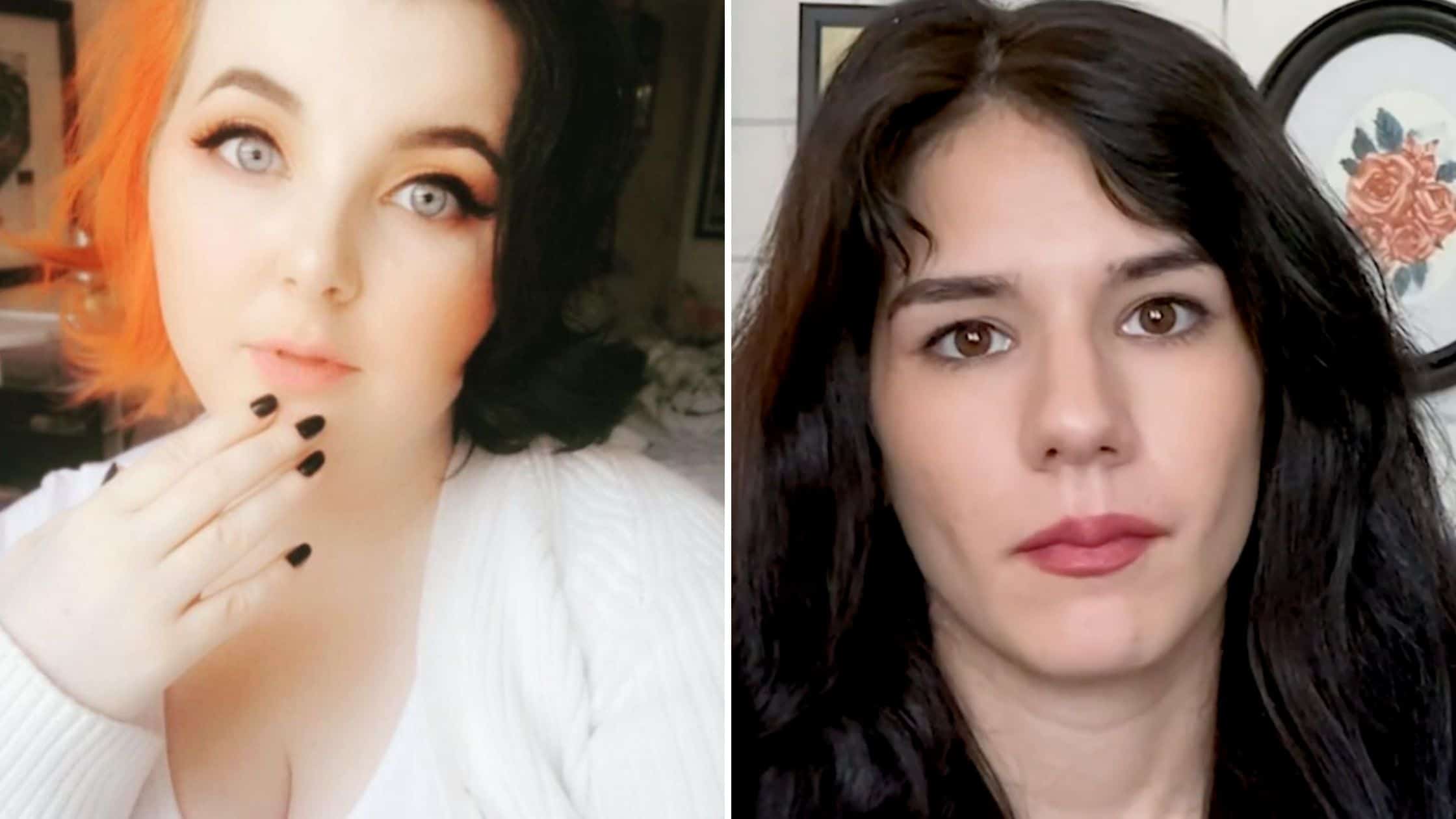 Both CreepShowArt and EmilyArtful are successful figures on YouTube who at one point both reached over 500k subscribers each. One of them has lost over 100k subs in the past two weeks because it’s been exposed that she allegedly stalked the other for almost ten years because she’s her husband’s ex. 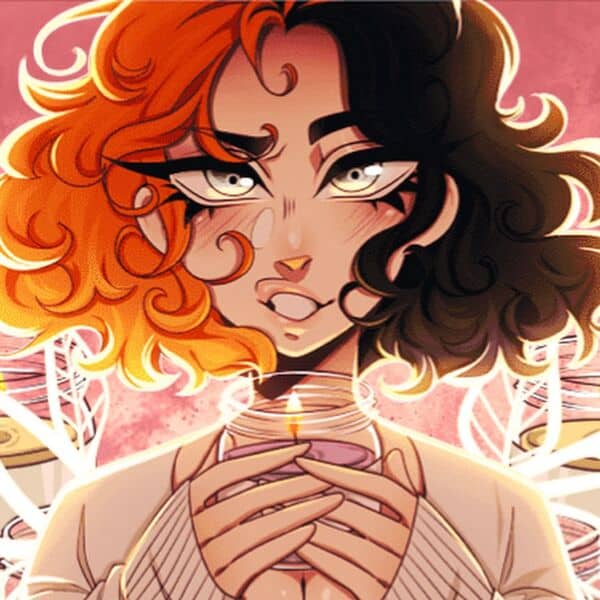 At the beginning of June, 2021, CreepShowArt, a.k.a. Shannon, was outed by lolcow site administrators for posting about herself and other creators on their site for years. Lolcow is an often negative and offensive place, but they do have rules, many of which CreepShowArt broke while posting there.

The main ones she broke are these “Do not deceptively post about yourself in the third person for any reason,” and “Do not advertise.” She allegedly posted about herself for years on the forum, and the site administrators found her out by tracking the posting behavior coming from her IP addresses. They have done this before, including with a YouTuber called The Josh Show, who tried to fake his own death in 2018 and then continued to post on the site after he was supposed to have died.

After CreepShowArt’s lolcow posts were outed by the site admins, she did not deny that the IP addresses associated with the posts were hers. Instead, she claimed that her stalker, who she calls “Amy,” spoofed her IP addresses in order to post on the forum as her for three years. This is a strange thing to do with someone’s IP address: use it to post anonymously on a forum for years, as it would only have consequences if the admins exposed the IP address.

Many of the posts are just flippant sh*tposts, but the concerning ones include doxxing her own sister while she was in the hospital, advertising her videos, praising herself, criticizing herself, making hateful transphobic and fat-shaming comments, and saying mean things about fellow creators that she was publicly friends with or had public feuds with. You can read most of her alleged posts on this Twitter thread.

Who is the real stalker?

Several years ago CreepShowArt made a video about Amy, her alleged stalker. There were a lot of red flags in this video right away as she started the video off with a disclaimer blaming herself for being stalked, and criticizing people who cry or show emotion when they share these type of stories. According to her in this video, showing emotion about a traumatizing situation is manipulation.

This seemed to be a psychological contortion in which she was attempting to alleviate herself of guilt and blame as a stalker by shifting that blame to the person being stalked. Even though in the video she was asking the audience to not feel sorry for her, and think that it was her own fault for going through harassment and trauma, it makes more sense if you realize she wanted to project those things onto Emily, the person she was allegedly stalking and harassing in real life. Maybe consciously, or unconsciously, she was arguing that if her audience could forgive her “stalker,” maybe they could forgive her if they found out she was really the one who had done the stalking.

“I have been making art content here on YouTube for the past six years,” EmilyArtful states in the opening of her 2-hour-long video about her experience with her abusive ex and CreepShowArt, who is now her ex’s wife. “For the majority of those six years, and several years prior, I have been facing stalking, harassment, and threats from one very recognizable source. For many years I had no idea who this person was. I had speculations but they were pretty far off. Because of that I had to endure that abuse. I went to the police, I was turned away. I spoke to an attorney, they told me it’s not going to be worth it taking it to court. I even went as far as hiring a private investigator for a short period of time, and he said the same thing.”

“My stalker is Shannon, better known as Creep Show Art,” Emily states in the video. “And what I believe to be her current husband Anthony Parker, who is also my abusive ex-partner.”

“You think it’s retribution because I was a drug addict?” she asks. “You have made my life so much more difficult that it ever needed to be when I was in an incredibly vulnerable place. And what you have done is sick and cruel and I hope that you never have the chance to do it to anyone else ever again.”

In the video, Emily also alleges that her ex had r@ped her in the past, and was emotionally abusive before they broke up because she complimented the appearance of one of her gay male friends. He viewed this as a betrayal.

The first instance of online harassment/stalking is when her Facebook was hacked years ago and Emily was unable to recover her account.

Years later a Twitter sock account called “Britta Filter,” that Emily believes to be Shannon, admitted to knowing who hacked her Facebook and stalked her. They claimed that the culprit was the person’s 15-year-old brother, and ended up admitting to having sensitive photos of Emily when she was underage (gotten from her hacked Facebook,) getting her fired from multiple jobs, and a host of other things, some of which Emily was unaware had even occurred.

The Britta Filter account appeared with this information/confession-by-proxy after Emily had let CreepShowArt know she was planning on serving her and her husband a restraining order. It seems like an effort to come up with a different culprit, but kind of like with the stalker storytime videos, if she was Britta Filter, she ended up telling on herself in a twisted way.

Shannon further connected herself to the Britta Filter account by mentioning to Emily a “Filter” account she claimed was trolling her as well.

Emily had started her YouTube channel in 2016 and came up with an idea she felt like she had not seen before. She called it “Sketchbook Storytime” and would tell stories over footage of herself drawing. Now that kind of concept is very popular on YouTube, but at the time it was pretty fresh.

The account CreepShowArt showed up in 2018, and started not only doing a similar format but called the series the same thing. At the time, EmilyArtful had no idea CreepShowArt was her ex’s partner and even interacted with her in DMs for a while before she found out. Her stomach dropped the day she saw artwork on CreepShow’s Instagram account that was obviously a drawing of her ex. It wasn’t just a coincidence, as he was tagged on the post as well.

Eventually, CreepShowArt rose to be a huge success on YouTube by shifting her storytimes from personal stories to ranting about hot topics, like YouTubers embroiled in scandals or headline-grabbing true crime. She made emotionally charged videos with the image that she was fighting for the rights of victims of child abuse, hate, and all manner of abuse and crime. This formula attracted a large audience and garnered her millions of views a month.

Creepshow’s strange actions before she was exposed

CreepShowArt fostered many friendships in the commentary and drama YouTube communities and developed trust with a number of creators who thought they had a friend and ally. YouTube commentary channel TehMimi was one of those friends.

In her video posted Wednesday about the topic, TehMimi pointed out that June 2nd, 2021, right before she was exposed, CreepShowArt removed 2,000,000 videos worth of public videos from her channel, which can be seen on Social Blade. She has since removed more videos, and it’s frankly odd that her video about her stalker Amy is still up. 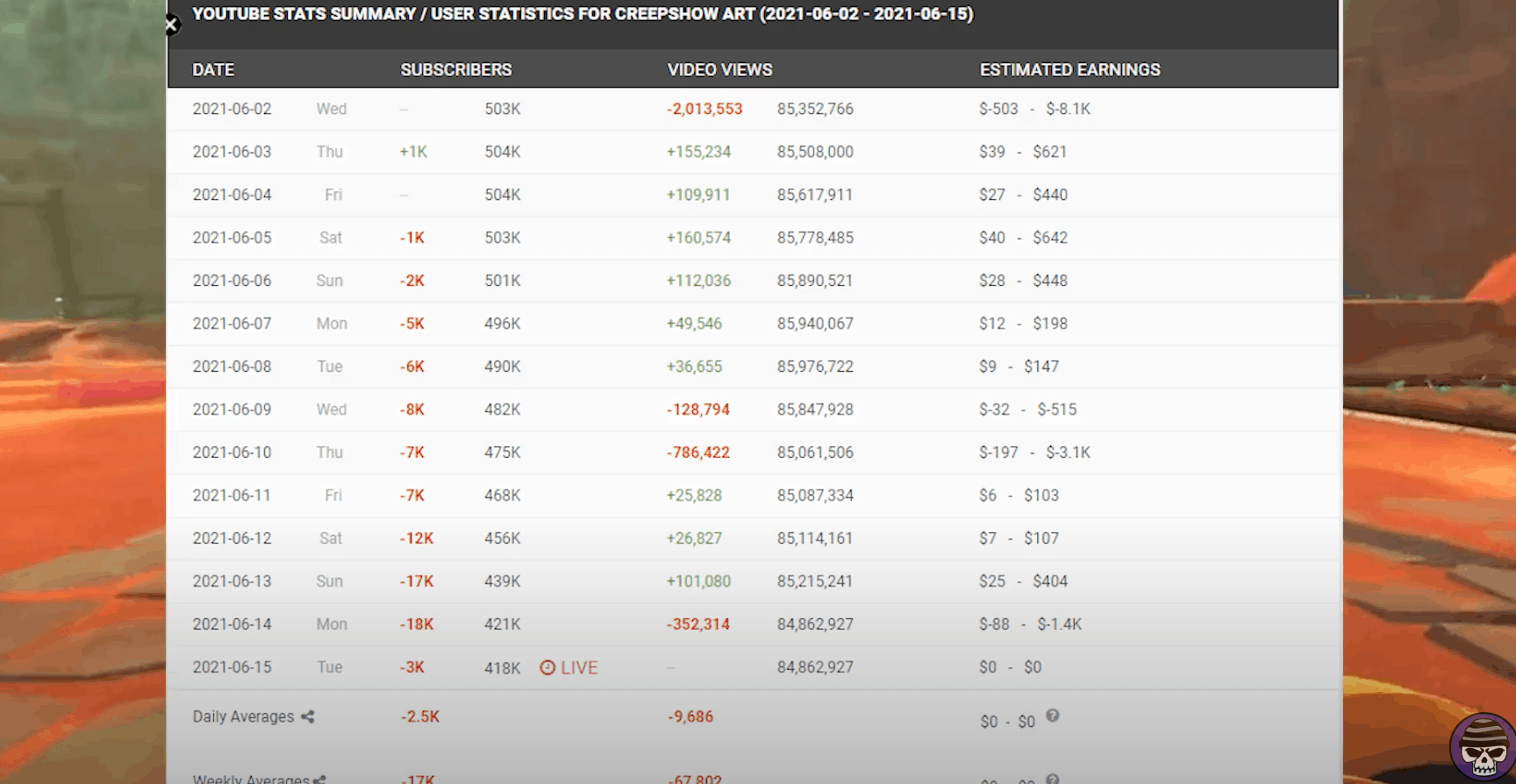 On June 4th, right before she was exposed, TehMimi says CreepShowArt shared a story with her chosen “close friends” group on Instagram claiming she had a stalker who was pretending to be her to ruin her career. She has since deleted her Instagram, so her name shows up as “Instagram User” in the screenshot below. 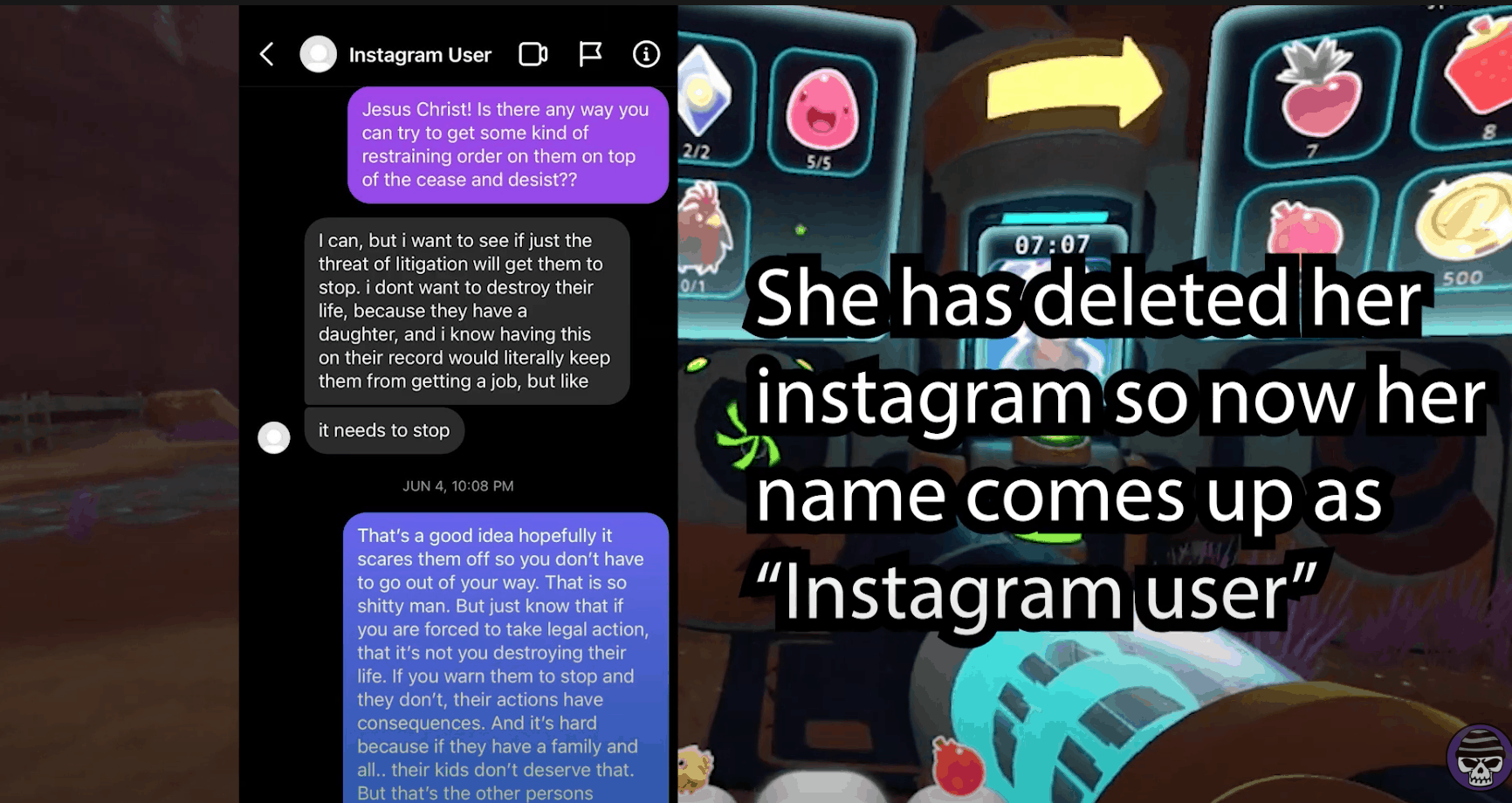 Around this time she also claimed her YouTube account had been hacked, which if true, is a serious security threat and would give hackers access to personal information, her Adsense account, and more. All the supposedly malicious hacker did was change her profile and channel art to glitchy images.

Around June 5th or 6h, CreepShow posted her explanation about being stalked by her longtime stalker “Amy” on her YouTube community tab. 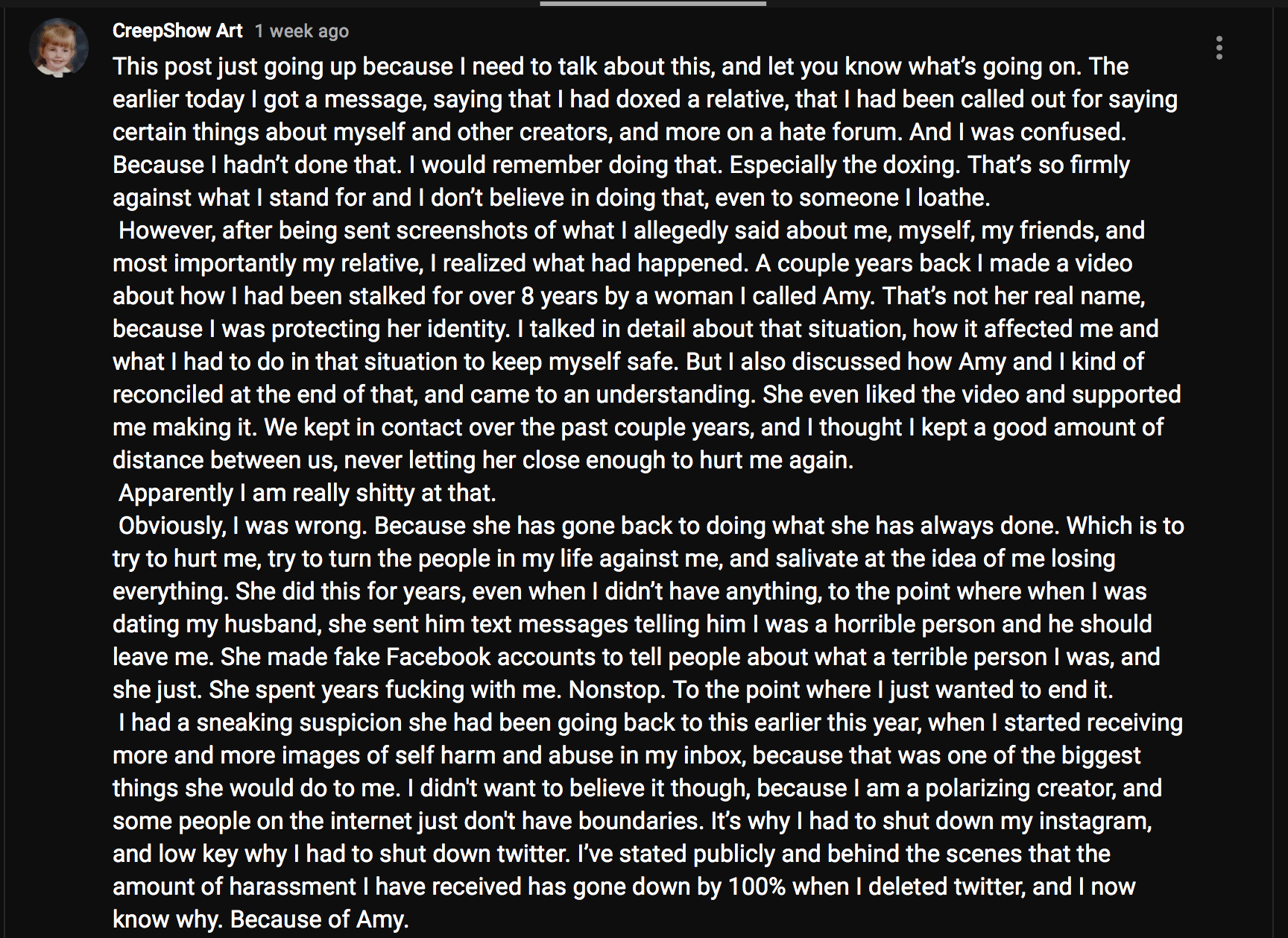 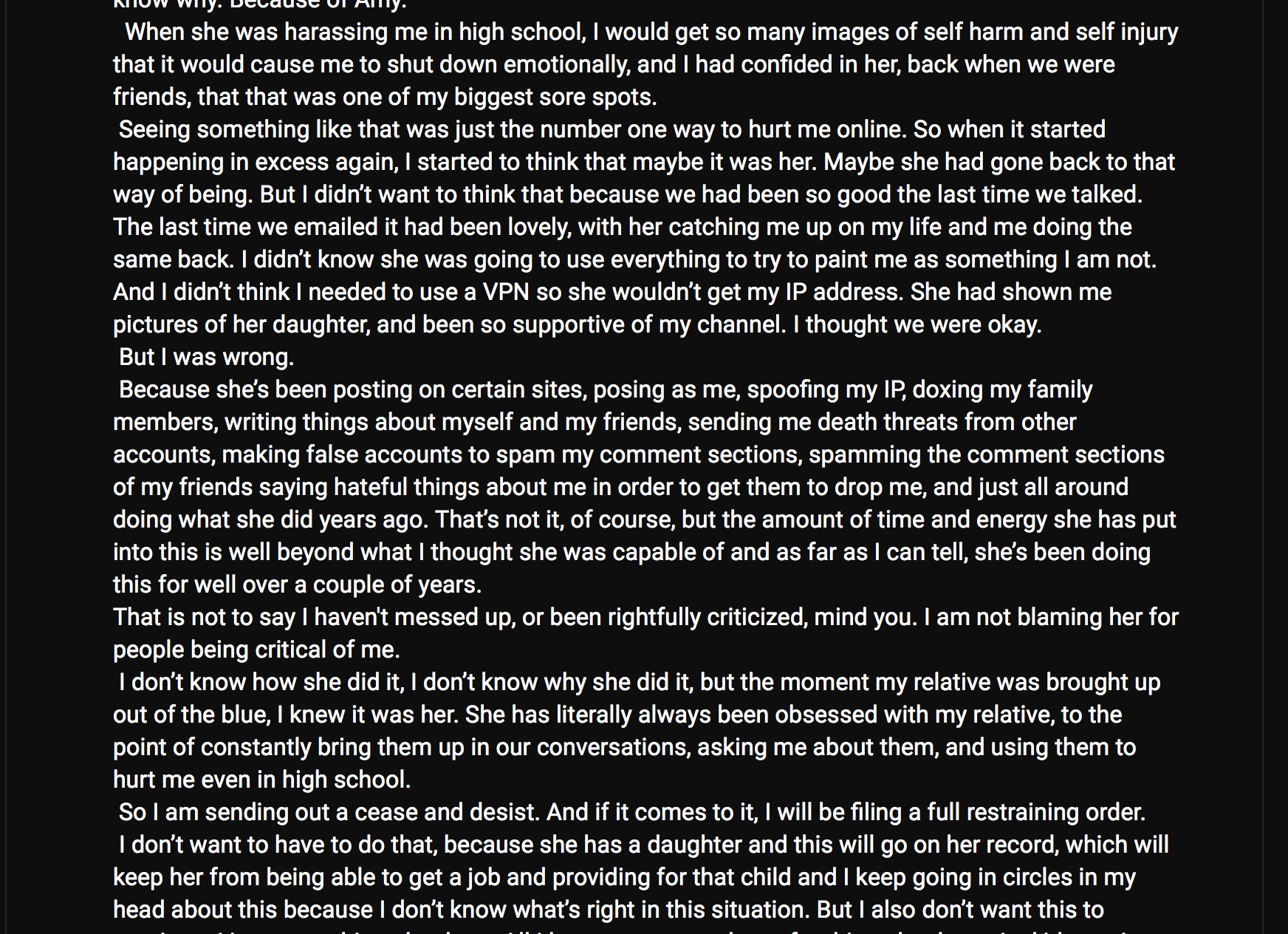 Ready to Glare, another commentary channel, says a few days before she was exposed, CreepShowArt sent roses to her house for seemingly no reason.

CreepShowArt has been MIA for days now. The community tab explanation about her stalker named “Amy” is still up, she last deleted videos on Monday. For a while, after her lolcow postings got exposed, she left up her Instagram account but removed all the posts. She left only a pinned Story with this message, saying she was handling the situation legally and would be back when she could prove “without a shadow of a doubt” that it wasn’t her: 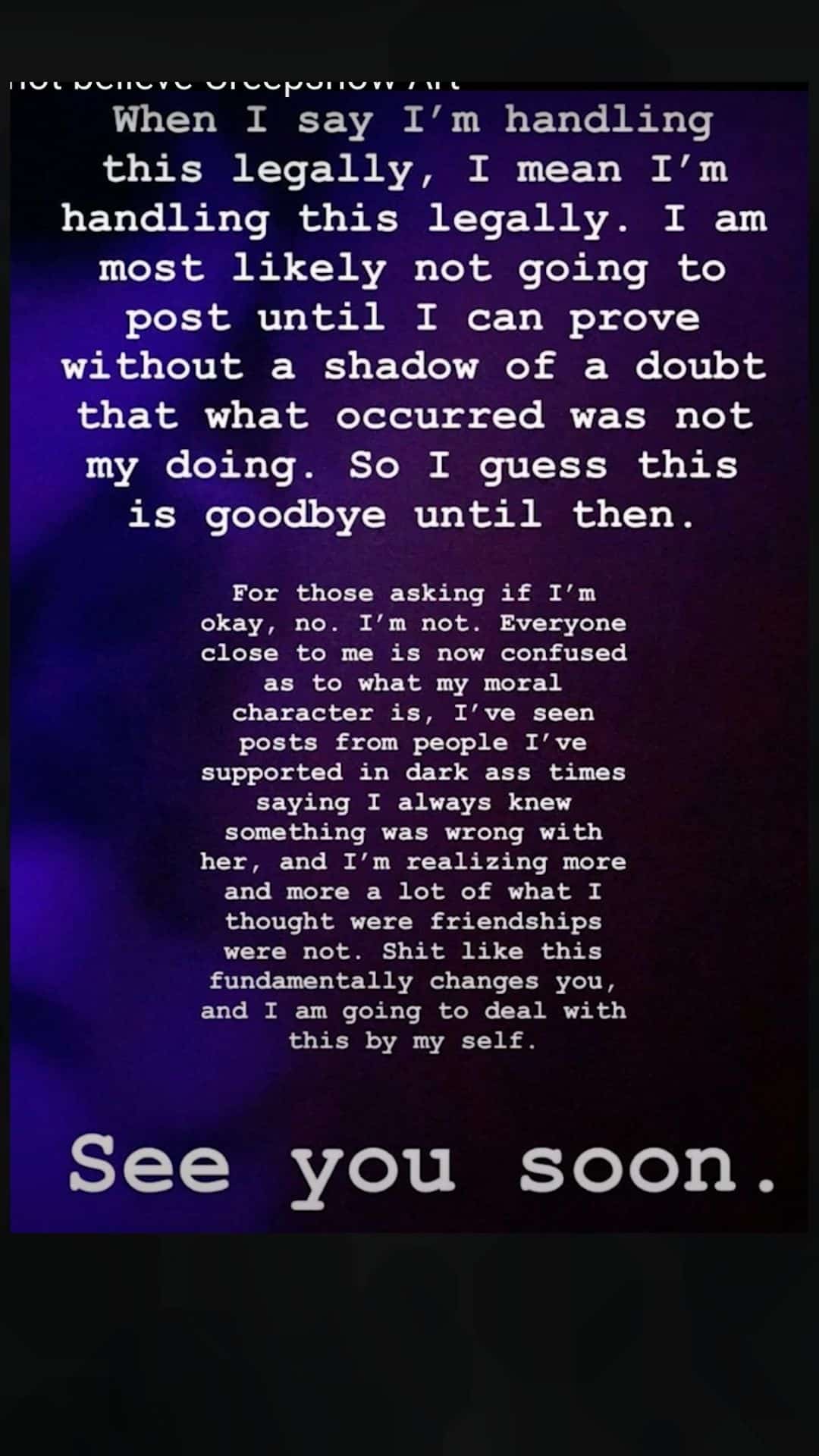 Her Instagram is now completely deleted and her former friends say that she has ghosted them and even gotten a new phone number. The profile pic on her YouTube channel has been changed to a photo of herself when she was a child.