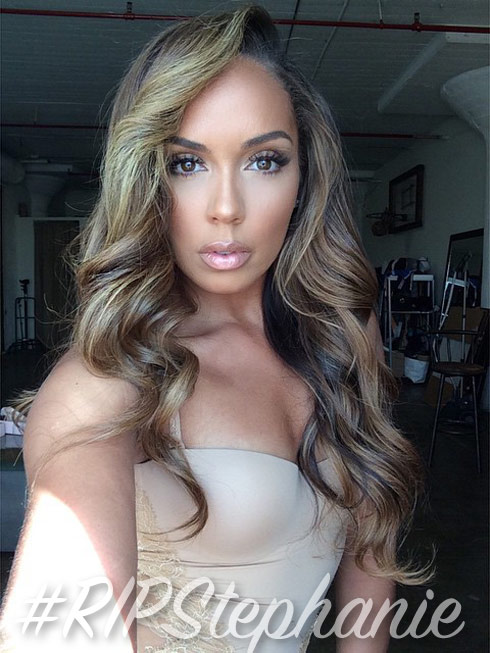 As more details emerge about the tragic murder of dancer and actress Stephanie Moseley in a reported jealousy-fueled murder-suicide by husband Earl Hayes, her Hit the Floor co-stars and others have taken to social media to express their grief.

There will never be another Stephanie Moseley.. I am crushed. Pained to pieces. She lived so much life & yet was only just beginning. God let us borrow an angel & He couldn't wait to have her back. My sweet sister.. Life without you will forever be dim. I love you. We all love you.

We lost a real special person today. Please spread some love to someone. We all need it. Rest in peace Stephanie. You are a true angel now

I'm still in shock over my friend and fellow Devil Girl Stephanie Mosley. Her light, laughter, beauty and talent will be missed by all. Words cannot express how much your Hit The Floor Family loved you and looked up to you. I know you will be dancing in heaven sweet angel. Season 3 is for you #stephaniemosely #hitthefloor #devilgirl #arelly

You meet people and you wonder how you ever went so many years previously without them. You meet these souls and you know you've known them for thousands of years. You made me feel safe. You made me feel whole and reminded me of my light when I felt dull. You walked into rooms and they'd stop. Your energy was unmatched. You are the most beautiful girl in the world. This one hurts. I'll never be the same. Please wake us up from this nightmare.

this is the worst day of my life. You have to tell people how you feel about them. You don't have time.

Coldplay Paradise is playing right now, and I'' smiling because that's where you are.

Although we weren't the closest, there's no doubt about it…your presence will be missed by thousands. Here's what I wish I had the chance to say…I admire your strength Stephanie, for you have it in spades. You walked in a room and the world stood at attention. You were a leader, your humor was quick and sassy, you took no shit, you stood up for those you loved deeply, you danced like the sexy woman you are and you did it all with an infectious sparkle. Once a devil girl always a devil girl, but heaven needs you to put on those wings and halo and shine honey. Show those other angels how it's done! God bless you, your family, the cast and everyone who misses you dearly. #rip

Stephanie Moseley. You were the most beautiful and talented girl I ever had the pleasure of knowing. Words can't even describe what I'm feeling right now. Thank you for always inspiring me. Rest in peace, angel. ❤️ #devilgirlarelly

My heart is so heavy. I stood taller next to you, Steph. This world will not be the same without your light. This season is yours @haselstar. Rest in peace #stephaniemoseley

My dear Stephanie Moseley. I have no words right now. You are truly one of the most incredible humans I've ever met. Thank you for everything you have taught me. You are gold….Proud to call you a sister. Season 3 is for YOU ❤️ Heaven has gained another angel today. #rip

I have no words. My heart is heavy. The loss is indescribable. We are missing a sister. Season 3, we dance for you. Please watch over us ❤️ #Michaelcanibuyacount #arelly #hairography #letmetakeaselfie #findyourlightladies #love

Sisters always! love u @Haselstar a beautiful woman, who made a huge impact in my life!! Remembered forever #RIP #stephaniemoseley

Today we bow our heads and send prayers to our special Stephanie and her beautiful family. Stephanie was a bright, inspiring, talented woman and I am honored I could call her my friend. We shared cries, laughter and more importantly a friendship that I will never forgot. Moseley you taught me so much, and I will hold our memories close to my heart. Heaven is lucky to have you. I love you ….RIP my dearest Stephanie

Man… My heart is heavy over the passing of this lovely, talented, real, amazing woman. Praying that her soul has left this stage and now dances with Angels in heaven on a stage of loftier significance. You will be missed beyond count and measure.

It's crazy how quickly your head and heart try and convince you the words aren't true. It's like you know what's been said but your brain is still protecting your heart. Ugh…It's all still too surreal. RIP bella. I hope you're smiling like this right now. You'll be the heart of Season 3.

It is a heavy heart that this is posted. One of #DevilsNation 'a own passed today and I make this for everyone in devils family. I am sorry for yor loss and I wish I could console all of you. So every member of devils nation Rise Up today for the loss of a great person and dancer! #HitTheFloor #StephaineMosley #DevilsNation #RISEUP ❤️

With a heavy heart RIP STEPHANIE MOSLEY ! Sending tons of love to the Cast & Crew of #Hitthefloor.

This will never heal. Never. It's not fair.

Come back to us. Say this isn't real.

The most beautiful woman in our world is gone. I won't believe it

Dedicating my whole life to what she didn't get to do. And all the dreams she shared with me. I am unstoppable. Give me strength Steph.

Stephanie clearly brought a lot of love to those around her and was apparently a shining light in numerous people lives. Rest in peace Stephanie.

Burt Reynolds has died at age 82