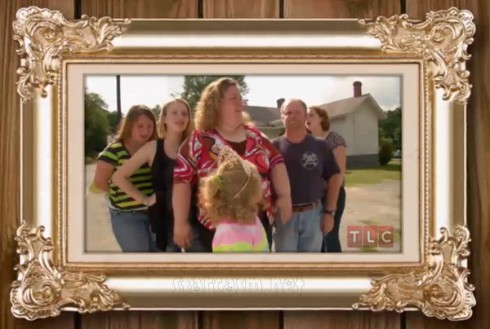 It’s not often that a spin-off series eclipses the original in the ratings, but that is certainly the case with TLC’s controversial smash hit Here Comes Honey Boo Boo, which beat out Toddlers & Tiaras last week with almost twice as many viewers! (The back-to-back premiere episodes of Here Comes Honey Boo Boo had 2.253 million and 2.14 million viewers and the new episode of Toddlers & Tiaras, which aired just before, came in with 1.554 million viewers).

The premiere was one of the biggest in TLC history, and there was very little drop off this week as the HUGE media buzz surrounding the show (plus the fact that it is just plain entertaining!) led to 2.059 million and 1.943 million people tuning in to watch Mama June, Honey Boo Boo and the rest of the family go extreme couponing at the Piggly Wiggly, build a “redneck slip and slide,” get facial s’mages and pedicures (except for June, who was unwilling to unveil her “forklift toes”), and June and Sugar Bear’s first date after eight years together!

It will be interesting to see if Here Comes Honey Boo Boo is able to sustain such high ratings, and I see no reason why it won’t. Despite all the negative comments about the show, it is extremely well produced and although the cast members do come across as authentically uncouth and eccentric (and unhealthy), they do so without so much as a trace of meanness — which seems like a winning recipe to me! Anyways, for others interested in how well the show is doing in the ratings, I’ve created a graph showing each episode from Season 1 and how many million viewers tuned in for each. I will continue to update until the season is over, and will probably add on for Season 2. 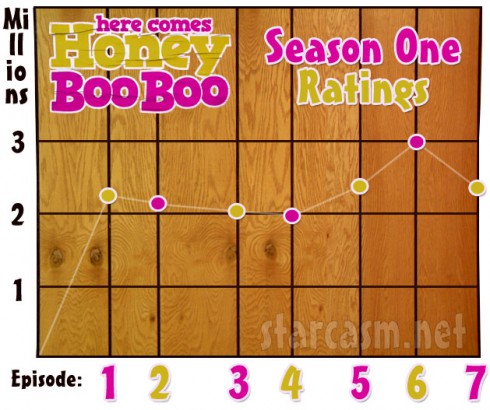 UPDATE – For those wanting specific numbers instead of just the graph above, here they are: (*NOTE – It appears as though TLC realized what a big hit they have on their hands and are reportedly filming right now – August 23 – for either one or two additional episodes.)

*** For episodes 6 and 7 Here Comes Honey Boo Boo was the number one rated show on cable in the all-important adult 18-49 demographic used by advertisers and most ratings sites!

And for those curious about what having over 2 million viewers means, here are some other popular reality show ratings from HCHBB‘s second week for comparison:

Needless to say, June and Alana are ginormously pleased!

For all things Honey Boo Boo, be sure to check out our Here Comes Honey Boo Boo Redneckipedia with all of their original terms, phrases and nicknames with quotes!

Honey Boo Boo and fam get a beautimous raise from TLC, stay grounded