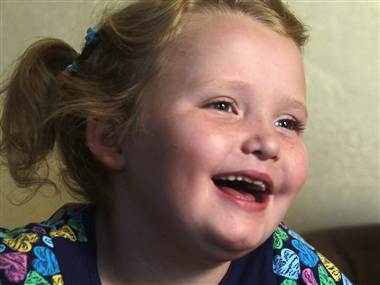 Barbara Walters has named Honey Boo Boo one of 2012’s most fascinating people!

Honey Boo Boo Child Alana Thompson and family’s redneck ways are interesting, and sometimes perplexing (CLICK HERE to educate yourself with our Rednexicon,) but we’ve been saying from the beginning that the family is obviously full of love; and that’s the most important thing.

Barbara Walters recognizes this too! She tells US Magazine:

“It’s a love story. It’s a very sweet, loving story. A lot of people will say, ‘For heaven’s sake, this is ridiculous, this is a child at 5 or 6 years old entering beauty contests. But the relationship between Alana and her mother — that’s the story, the two of them. It’s very touching. Honey Boo Boo is not an obnoxious little girl. She’s sweet and loving with her mother and loving with her sisters [Jessica, Lauryn and Anna]. And now Anna has a new baby, and the baby has [three] thumbs — but so what? It’ll make you smile.”

We can’t wait to see Alana and June’s in-depth interview with Barbara! Hopefully she’s spend some time with Sugar Bear and the rest of the fam!

Adam Levine isn’t a fan, however. He went OFF to GQ about Honey BB:

Seriously, Honey Boo Boo is the DECAY of Western civilization. Just because so many people watch the show doesn’t mean it’s good. So many people witness atrocities and can’t take their eyes away from them, but that doesn’t mean they’re good.

That show is literally The. Worst. Thing. That’s. Ever. Happened. It’s complete f****g ignorance and the most despicable way to treat your kids,” he said. “F*** those people. You can put that in the magazine: F*** those idiots. They’re just the worst. Sorry, I’m so sensitive to that — like, I don’t know, man, it’s upsetting. Just to clarify, I said, ‘F*** THOSE PEOPLE.’