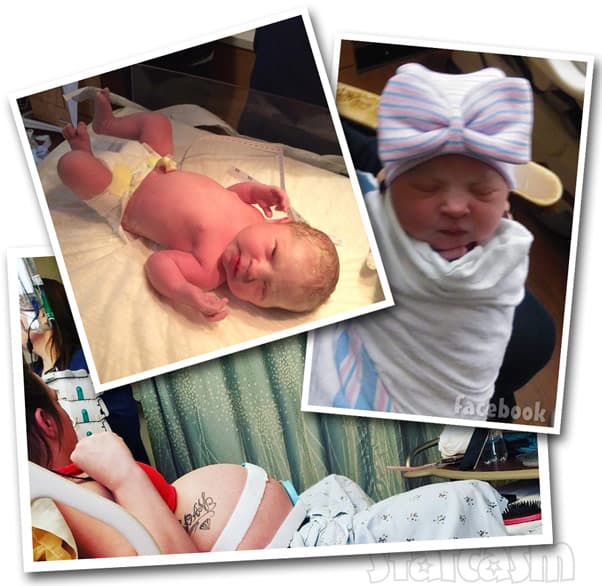 Congratulations are in order for Gypsy Sisters star Mellie Stanley as she gave birth to her fourth child, a little girl, on Saturday!

Mellie’s newborn daughter is named Serenity-Faye and she was born early Saturday evening. The new arrival weighed 7 pounds and measured 19 inches at birth.

Mellie shared the news with photos and messages on Facebook and Instagram soon after Serenity-Faye’s birth. “My baby is here,” Mellie captioned the first photo (above: top left) shared on Facebook at roughly 7:30PM EST.

Mellie later posted a gallery of images on Facebook along with the weight and length before sharing a similar post on Instagram. “Instagram I’d like to introduce you to Serenity-Faye! She was 7lbs and 19 Inches! Love my baby girl!” Mellie wrote, adding the hash tags #GypsyBaby, #GypsyPrincess, #babiesofinstagram and #2020Baby.

At the same time, proud pop M.J. West also posted the gallery on Facebook and wrote: “Our Serenity Faye West has arrived!!!!” (Mellie hyphenated the name and M.J. did not, so we are defaulting to the mom’s spelling.)

Here are more photos of Serenity-Faye:

As fans of Gypsy Sisters are well aware, Mellie is a bit of a drama magnet, and her birth was no exception. As she revealed to her followers on social media earlier this week, Mellie was scheduled to be induced on Friday. However, there was a very late change of plans, and Mellie was none too happy about it.

“When u get scheduled for a induction and they change it without telling you. I’m so done with this flipping hospital,” Mellie posted on Facebook on Friday. Mellie revealed in her interaction with commenters that her doctor made the decision and she was told that her new induction date was March 10. Well, she obviously didn’t make it that long!

On Saturday, Mellie shared a photo of herself waiting in the delivery room of a hospital in Martinsburg, Virginia. “It’s time!” she captioned the image. “My baby should arrive today!”

Hours later, Mellie shifted to Facebook for another update. “Just got the epidural. Can’t wait for her to get here,” she wrote.

Serenity joins three older siblings. In our initial post about Mellie’s fourth pregnancy way back in June, we provided the following update:

During the course of her pregnancy, Mellie revealed that it was a surprise because she had a birth control implant at the time of conception.

As far as M.J. and Mellie, it appears as though they have been together since at least April of last year. The two have had a few ups and downs, but nothing like the extremes of some of Mellie’s previous relationships.

Here’s a post from Mellie addressed to M.J. from January 26:

Sometimes I take you for granted and drive you insane but I couldn’t/wouldn’t love anyone else In this world. You really complete me 100% and I thank god everyday for sending you in my life even though I don’t show u, you have turned my life completely around and made me want to be a better person. No one can compare to u I love u more than you know. Thank You For Every thing and thank you for just being here by my side through everything. Love u M.J. West.

We’ve been following Mellie since TLC first announced Gypsy Sisters more than seven years ago. It has been a dramatic seven years, to say the least, but we’re hopeful she’s finally found some peace and stability with M.J. We wish them and their family all the best!