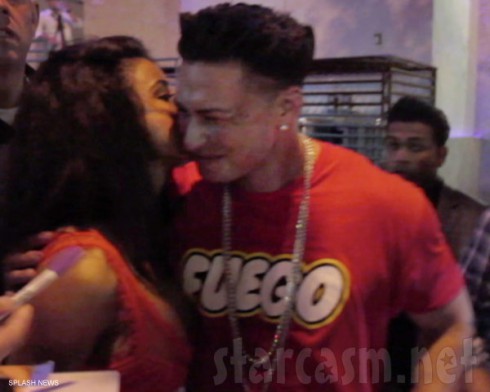 Paul “DJ Pauly D” Delvecchio has remained infamously single for the entirety of his run on Jersey Shore — as far as we know! Don’t get us wrong, he’s definitely spent his fair share of time in the Smush Room, but no one has been able to tie him down. However, now that filming has wrapped, he may be up for a relationship!

In fact, he was seen over the weekend with a beautiful mega-boobed brunette! Who was she? Her name is Lina Martini and she and Pauly met while co-hosting an event at Club ZOUK in Dallas. Lina is an model/actress from Colombia who is currently living in Dallas.

After the Dallas event, the two were spotted getting cozy and Lina was even seen giving Pauly a kiss on the cheek. They shared an embrace outside of the event and appeared to be completely smitten with each other, holding each other, and gazing into one another’s, umm… eyes! 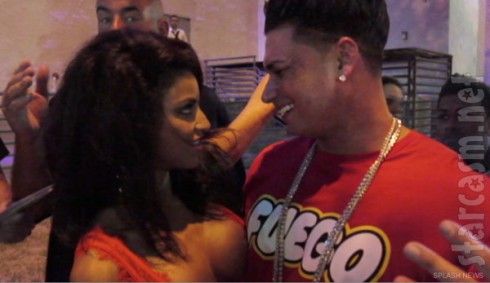 But was club hook up for realz? Here’s the account from Splash News about the photos:

“Lina talked about how hot it was inside the club and then asked Pauly to vote for her in the Las Vegas 2012 Hot 100 contest, and Pauly reportedly said ‘That’s what’s up..I love Vegas!’ Lina then went in to give him a kiss on the cheek before ending a fun night hosting in Dallas.”

Hmmm… sounds purely professional to me. Now what’s this about a Las Vegas 2012 Hot 100 contest? 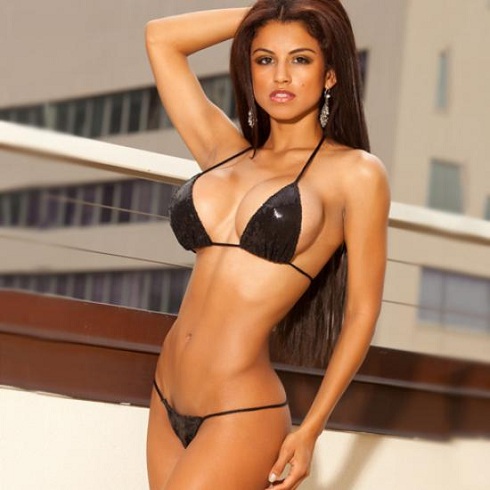 According to Lina’s 2012 Las Vegas Hot 100 profile, she is “talented, confident, and intoxicating” .. and humble, apparently. Anyways, she also has quite the assets (as you can see in the picture above) — her measurements are 34DD-24-36! Also in her profile, she claims that her celebrity twin is Eva Mendez. Ironically, Pauly recently dished that his celebrity crush was Eva Mendez. Perhaps these two are meant to be after all! (Although I would hope Pauly D would wind up with a girl whose name wasn’t a knock off of Tila Tequila.)

This isn’t Lina’s first brush with a Jersey Shore star. She was on hand for the Spring Break 2012 Concert featuring The Wanted at the Palms Pool in Las Vegas earlier this year — an event hosted by none other than Ronnie, Sammi, and Deena! Lina even posed for pictures with the band. Perhaps Lina has been seeking out Pauly for months? Could he have another ethnic stalker? 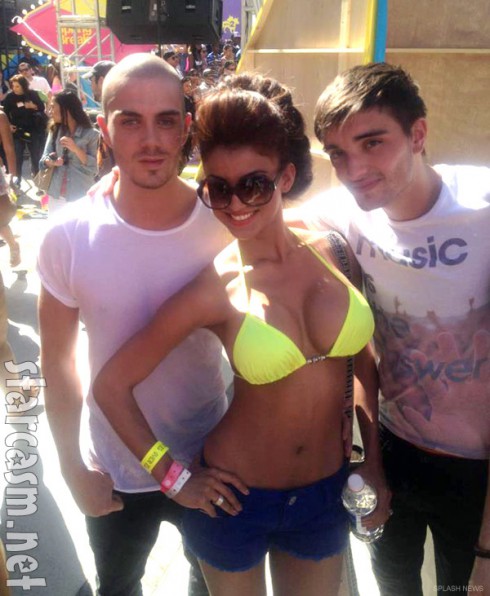 The Jersey Shore deejay is 32 years old, so it may be time to consider wifing up. On top of that, the show is coming to an end so he will have more free time to pursue a relationship a little more serious than a few trips to the Smush Room.

Pauly has certainly maximized his 15 minutes and recently launched his own cocktail line, REMIX cocktails, with the same people who worked with Bethenny Frankel on Skinnygirl which sold for a reported $120 million. In other words, he made an extremely good business decision! Now all he needs to do is sit back and enjoy his fortune with someone special!

UPDATE – Here’s a video of Lina Martini from her Facebook page in which she is showing off her qualifications for the Las Vegas 2012 Hot 100 contest: