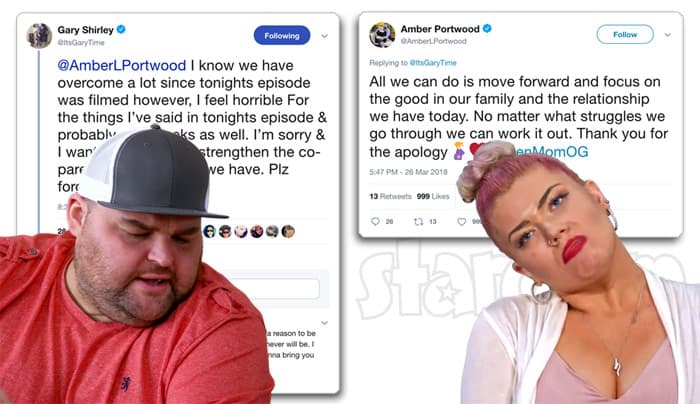 On Monday night’s episode of Teen Mom OG, Amber Portwood expressed her frustration with a show producer after seeing what her ex Gary Shirley and his wife Kristina had said about Amber in a previous episode. In that previous episode, Gary and Kristina were talking about how little time Amber had spent with Leah during Leah’s summer break, mentioning that Amber had only scene her daughter twice during that period. “Amber’s not there. She’s a come and go kind of mom,” Gary said. “Some people want to be parents, some people are parents, and some people just don’t give a f**k I guess,” he added.

“For them to act like I’ve been an absent mother, you know that’s bulls**t,” Amber tells her producer. “I’m not an absent mother, I’m there for my kid.” After we see Gary and Kristina’s scene, Amber continues. “It’s not right for them to do that to me. [BLEEP] It’s not even true, first of all, because I saw her three times and not twice. It’s bulls**t that they even try to make it into that.”

Amber then admitted that she often doesn’t deal with her emotions very well, citing her mental illness. “I’m not as strong as people think — sometimes I’m broken,” she says. “But I don’t need people to understand that, what I need is for Leah to know that I love her. And I feel like if her dad and her step-mom are talking s**t about her mother, she’s going to start thinking these things, if she ever hears it. That stuff bothers me.”

The producer asks Amber how she wants to handle the situation with Gary, and Amber reveals that she has already spoken with him on the phone about it.

Teen Mom OG fans may recall that Amber also lashed out at Gary and Kristina publicly on Twitter after seeing the episode back in January — which I assume is when the scene from this week’s episode was filmed. “Make sure to watch Gary and Kristina tonight talking sh!t about me!” she tweeted just before the episode aired. “It must be hard making money off of me! Being such a bad mom and all. Where would they be? Wait..in a 1 bedroom shack in the ghetto of Anderson where he was before I got out and the show came back on!! Ignorant!”

She later accused Kristina of breaking up her own family for money and TV before adding: “Her husband got a restraining order on her cheating a** with multiple people and then cheated with Gary!” (You can read all of her enraged tweets as well as Gary’s responses here. We also have a full transcript of the scene as well as Kristina’s response here.)

Back to the most recent episode…

After Amber’s discussion with her producer, viewers then see a scene with Gary and Kristina. The scene was filmed just after Gary got off the phone with Amber and he recaps his conversation with his ex for Kristina:

The reality of it is, you didn’t see Leah for months at a time. I understand you were broke up with Matt, and you want to sit here and, like, take a break. But, when you’re talking about a break for the whole entire summer when you passed up over two to three months of your time with Leah because you’re depressed?

That concludes Gary’s recap of his conversation with Amber, and now he is just talking with Kristina:

This time it was Gary who regretted his angry outburst as he took to Twitter just prior to Monday night’s episode to apologize for the things he said in the episode: 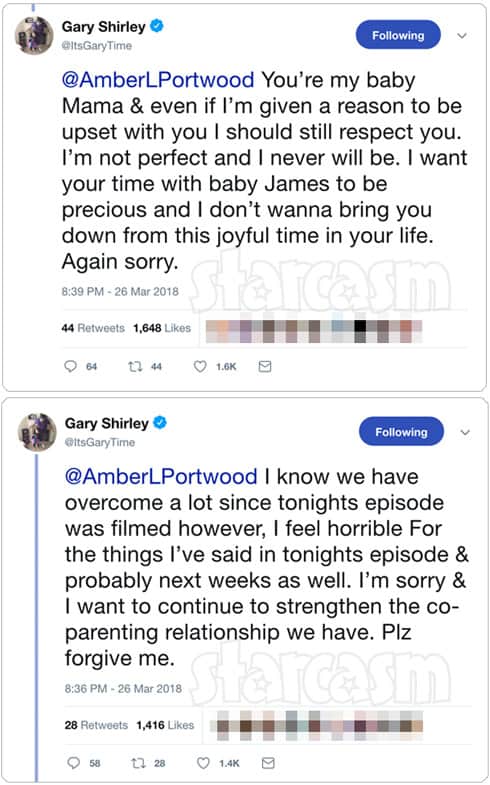 GARY: @AmberLPortwood I know we have overcome a lot since tonights episode was filmed however, I feel horrible For the things I’ve said in tonights episode & probably next weeks as well. I’m sorry & I want to continue to strengthen the co-parenting relationship we have. Plz forgive me.

GARY: @AmberLPortwood You’re my baby Mama & even if I’m given a reason to be upset with you I should still respect you. I’m not perfect and I never will be. I want your time with baby James to be precious and I don’t wanna bring you down from this joyful time in your life. Again sorry. 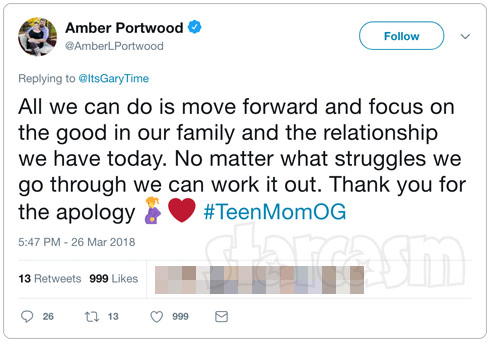 AMBER: All we can do is move forward and focus on the good in our family and the relationship we have today. No matter what struggles we go through we can work it out. Thank you for the apology?❤ #TeenMomOG

Co-parenting (and other) arguments are bad enough — I really can’t imagine what it must be like having to relive them and re-address them months later like these reality stars have to! Kudos to both Amber and Gary for handling this situation well without allowing it to escalate yet again.