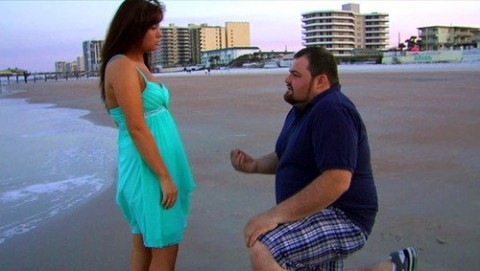 Amber Portwood and her baby Leah’s father Gary Shirley have undergone more than their share of drama.

Ever since Amber got pregnant and invited MTV’s cameras into their lives, it’s been nothing but explosive fighting (sometimes violent) interrupted by rare peaceful interludes. They’ve been engaged at least twice on camera, and broken up a million times.

According to the last People Magazine, Amber, who’s eternally stressed out about dropped out of school, is still struggling to complete her GED but has found time to lose weight and get fit.  She’s wearing Gary’s ring as a means to “signify their pledge to stop fighting,” but they’re currently not engaged.

Amber explains, “We made that decision because of Leah. I don’t want her to see that and think it’s okay.”

But she adds there’s still hope for the Amber and Gary roller-coaster to continue it’s whirl, “But he’s a great dad, and there’s a possibility [of reconciliation.

UPDATE: As of 10/11/10 Amber and Gary are together and have exchanged promise rings.