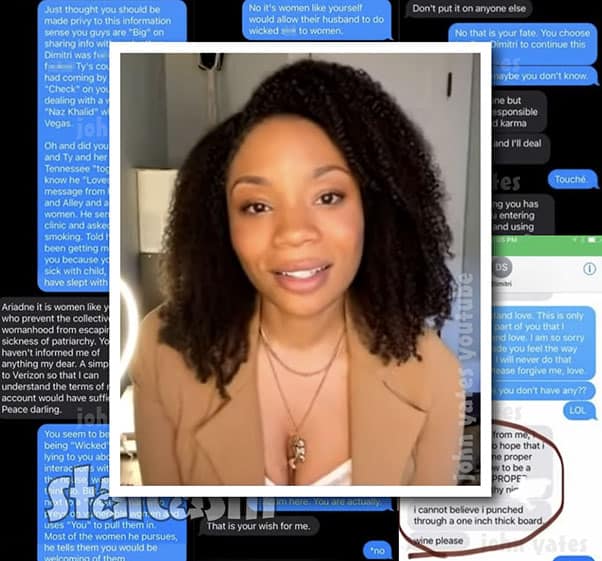 Ariadne Joseph, a former sister wife of Seeking Sister Wife couple Ashley and Dimitri Snowden, continues to speak out against the couple and their history of deception and abuse.

After sharing a lengthy recap of her relationship with the Snowdens, including multiple descriptions of alleged physical abuse at the hands of Dimitri, Ariadne has returned to offer up more information — including LOTS of receipts in the form of alleged text messages from Ashley and Dimitri!

The new update comes via John Yates’ YouTube channel, and this time around he welcomed Sharrell from Sharrell’s World to serve as co-host. Ariadne begins the new interview with a brief recap of her history with the Snowdens before getting to the receipts.

After exchanging text messages and a missed call, the two were eventually able to have a conversation about the Snowdens. John asks Ariadne what the two discussed.

Ariadne later states that Dimitri got a new CPN, not a new social security number. As mentioned in her previous interview, Ariadne alleges that Dimitri got the new CPN from a woman that used to handle his taxes. He and this woman were, of course, having sex, and at one point she thought she was pregnant with Dimitri’s child. The woman’s husband made a series of social media posts in 2017 claiming that his two children were missing and they were last seen with Dimitri. I’m digressing here — you can find out all about Dimitri’s tax boo and the missing children in John’s first Seeking Sister Wife Snowden exposé video.

I was curious about this CPN thing, so I went to Google. Suddenly, everything Ariadne was saying made perfect sense. Here are a couple excerpts from Experian’s explanation of CPNs:

A CPN, or credit privacy number, is a nine-digit number that’s formatted just like a Social Security number (SSN). It may also be called a credit profile number or credit protection number. Companies that sell CPNs to consumers market them as a way to hide a bad credit history or bankruptcy. They’ll also claim you can use the CPN instead of your SSN to apply for credit with your new credit identity.

Does this seem too good to be true? That’s because it is. In fact, it’s illegal…

…Companies selling CPNs market them as replacement SSNs, promoting the idea that CPNs are legitimate. For example, one site advertising CPNs claims the numbers are “fully tri-merged with the Social Security Administration.” (Sounds official, doesn’t it?)

In reality, these companies are scam artists. They may obtain SSNs by dubious means—often from children, senior citizens or prison inmates.

Ariadne feels confident that Dimitri didn’t give show producers or the Discovery legal team his real social security number, and that’s why they weren’t able to find out he is a convicted felon and was named in multiple lawsuits. Whatever social they had, I can guarantee you it wasn’t his original social,” Ariadne continues. “And this is part of the reason why they probably could not find things on him immediately.”

Ariadne previously mentioned that Dimitri being a felon means he can’t legally have any firearms, but she says he has them regardless. “He is a felon and he is not supposed to have possession of guns, and this is how I know for an absolute fact,” she says. “He still can’t buy guns to this day. He still has Ashley purchasing guns for him. I actually have texts on that too.”

Ariadne says that Dimitri’s law bending in regards to guns extends beyond possession. She says he tried to ship guns from California to another state.

“When this goes to court and they start cracking open this case, that man is going to jail,” Ariadne asserts. “[There’s] absolutely no way he can evade this, unless there’s a miracle.”

Sharell asks Ariadne if Ashley has a CPN as well. “I don’t know what she has. She might. I mean, I’m not really sure. I know that she knows what he has, though. She knows what he’s doing, and she’s complicit in it all.”

After Ariadne spoke with the legal rep from Discovery she was told that they were going to run the information by their team, but she never heard back. Ariadne says she was really disappointed that she never heard back and they continued to feature the Snowdens as they recruited new women into their family.

“It’s awful because they knew,” Ariadne says. “They knew.” Ariadne reveals that at least two other women contacted the Discovery legal team after her with similar stories about the Snowdens.

Ariadne is asked if she thinks that there should be legal action taken against Discovery for continuing to film the Snowdens after they were given information about the alleged abuse suffered by other women who were in a relationship with the Snowdens.

“I believe that they should sue the S#!T out of TLC! And they should not stop until they get what they need from these people because TLC knew and they put those women’s lives in danger — and their children…That’s low. It’s very sick. And, yeah, they deserve whatever they can get out of this situation because those women went through hell.”

Ariadne then points out that Vanessa, Christeline and Tayler are still fearful, and they are being silenced by non-disclosure agreements that the Snowdens had them sign. Not TLC, but the Snowdens. “All three are still hiding and can’t say anything,” Ariadne points out.

“I know what that feels like,” she continues, “to have been victimized by somebody. And have your children — I mean, we literally had to go to therapy after leaving that house. So I know if I went through some of things they went through — and from what I know, they went through way worse. There were a lot of things that was happening [to them] that didn’t happen to me. Even though I experienced violence, they experienced some other things. And so can you imagine just not being able to say anything?”

The women being forced to remain silent is made worse by the fact that they were on a reality show and face criticism from viewers. “They’re making comments like, ‘Oh, you know, well she wanted the D.’ No way. [It was all] scripted. It was edited, you know, for entertainment,” Ariadne argues. She says that when the cameras weren’t there, there “was a lot of traumatic stuff happening.”

Ariadne says Dimitri has no money, so he would have a hard time paying the legal fees it would take to go after any of the women if they violated the Snowden NDA. She adds that the women are currently seeking legal counsel and that Christeline’s NDA might be voided regardless because she has filed criminal charges.

Later in the interview, Ariadne shared alleged text messages between herself and Ashley, and between herself and Dimitri. In her exchange with Ashley, Ariadne is making Ashley aware of Dimitri’s sexual relationship with Ty (yes, the tax lady) as well as Ty’s cousin. Ashley says this was the first time she was made aware of Dimitri’s infidelity issues, and she was “shocked” when she found out.

Not only was Ashley well aware of Dimitri’s propensity for promiscuity, but she replied by telling Ariadne that “it is women like you who prevent the collective of womanhood from escaping the sickness of patriarchy.” That definitely sounds like Ashley!

Sharrell asks Ariadne if she still had feelings for Dimitri after she left.

“Yeah, I still loved him absolutely,” Ariadne confesses. “I was heartbroken. I was completely distraught. I love those children. I loved her. I loved him.”

Ariadne shares a story about one of the few times she was out by herself due to Ashley being sick, and how she bought Ashley flowers while grocery shopping. “I continually cared about her and those children, and I loved him, so this wasn’t a situation where I was just walking away…I was distraught and I was depressed for months. For months I needed therapy because I did not understand what the hell just happened to me. I literally gave up everything that I had — sold everything that I had to move there, to start a life with them.”

The interview then addresses a text message exchange allegedly between Ariadne and Dimitri in which he mentions punching through a one-inch-thick board, which backs up Ari’s disturbing account of an instance in which Dimitri allegedly abused her. (That incident is recapped in detail in our previous post.) 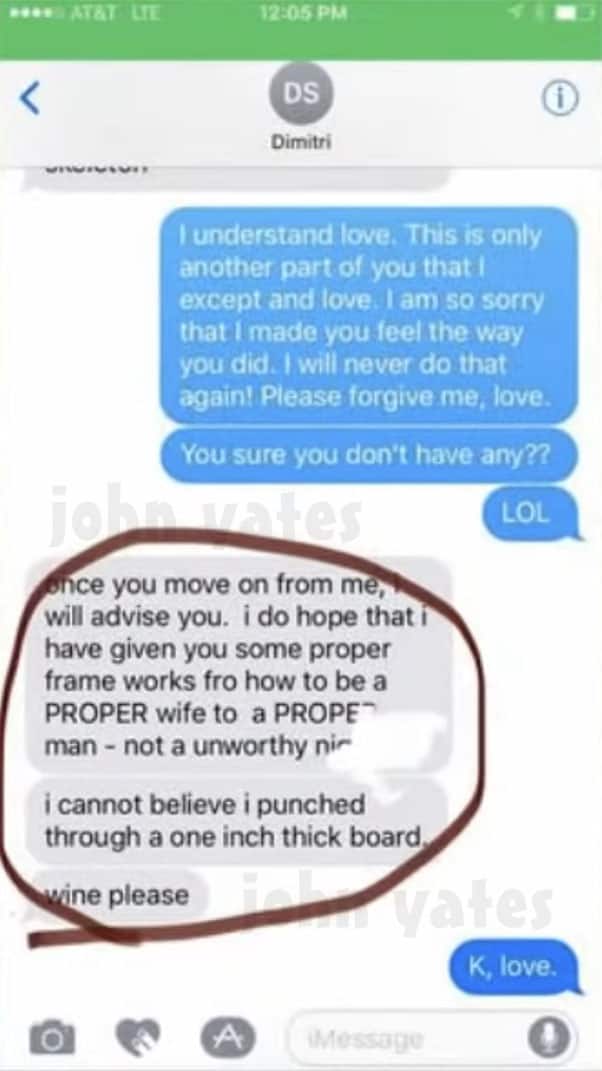 Ariadne explains that she is being nice in the text messages because she was still living in the house at the time. She also says that she has received comments from people asking why she didn’t run away after that altercation.

I used to ask the same thing when I heard about women being abused, and I’m, like, ‘Why the hell wouldn’t you just leave?’ You don’t know and don’t understand until you’re in it, until you’re there. You’re frightened half to death for your life, for your children’s life, and what you have to do is what you have to do to survive. Just like anybody, I just — I wanted it to work…When I got there, I had sincere intentions for everything. I didn’t come there for fame or money, I came there because I wanted to be married. And I wanted that relationship construct. I wanted him. I wanted the support, the sisterhood — all of the things that they sold me was what I wanted.

Getting back to the present, Ariadne says a little more about Christeline’s situation. “She has proof that she was assaulted. There is someone else who witnessed her beating, and this person can testify for her.” Ariadne confirms to John that the witness is in another state before continuing. “She will be vindicated. She will. I know she will. And she deserves it. And her babies deserve it. And I know once this is all said and done, I just pray for healing for Chrissy, and healing for Tayler, and healing for Vanessa. They all need it. They all need it. Those women did not deserve what they got.”

The women didn’t deserve what they got from the Snowdens, but they did deserve to get paid from TLC. Unfortunately, Ariadne says that didn’t happen. “These women weren’t paid,” Ariadne reveals, referring to Jocelyn, Vanessa, Christeline and Tayler. “People keep saying, ‘Oh they did it for the money.’ There’s no money for them. Ashley and Dimitri got the money. And Dimitri kept calling and asking TLC for advances with his broke ass.”

John then reads an exchange between Ashley and Dimitri that Dimitri sent to another woman. I was initially going to include a transcript of the message here, but it turned out to be REALLY long, and this post is already lengthy enough! So I will be doing an additional post and adding the link here when it’s up. I’ve already done the transcription, so hopefully it will be later tonight. UPDATE – Here is the link.

I want to say thanks again to Ariadne for sharing her story, and to John Yates for giving her a platform to talk freely and at length. This story has already gained a lot of momentum, and at the very least I would assume that the Snowdens will not be asked to appear on TLC ever again.

We will continue to monitor the Snowden situation and will try to post about any major updates — including civil or criminal cases against either or both of the Snowdens. Stay tuned!

If you want to share your reaction to Ariadne’s latest interview, join the conversation over on Instagram: