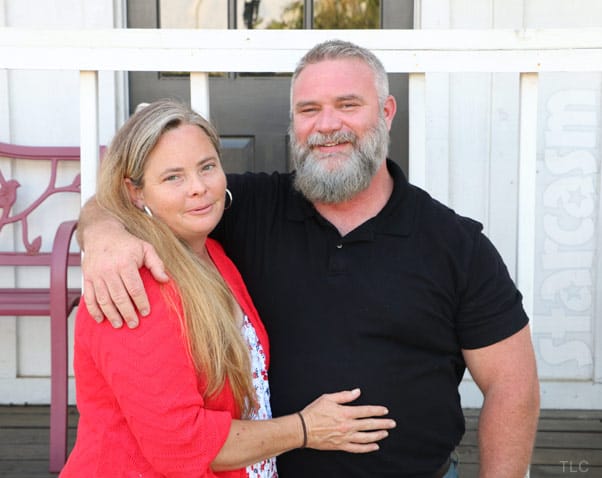 Seeking Sister Wife star Bernie McGee passed away on Saturday after reportedly suffering a heat stroke and a heart attack while out riding his bicycle. Bernie was just 41 years old, and his death came as a shock to viewers, and to his friends and family.

We did several posts about Bernie since it was first revealed that he had died, including reactions from some of his Seeking Sister Wife co-stars, as well as a link to a GoFundMe campaign set up by a family friend to help his widow Paige McGee deal with the unexpected cost of the funeral. (Bernie worked and Paige home school their two youngest boys.)

As far as the concept of the show, the McGees’ story line certainly had its fair share of cringe-worthy scenes. But, regardless of your take on plural marriage, I think most would admit that Bernie came across as a genuinely affable guy as well as a loving father and husband. I really love the comment left on our most recent post about Bernie’s passing by Jodie from the RealiTV Reality Roasts podcast:

Heartbreaking. It’s clear he was a great dad because his boys were the most kind, genuine, welcoming and polite kids no matter the circumstance. May they find time for healing and with support from everyone, no matter whether you enjoyed the show or not. It’s reality TV, not real life, and this family deserves to be surrounded by positivity and love as any other family would.

The reason Jodie tagged John is because he had been responding to some of the comments being left — good and bad — on our posts. 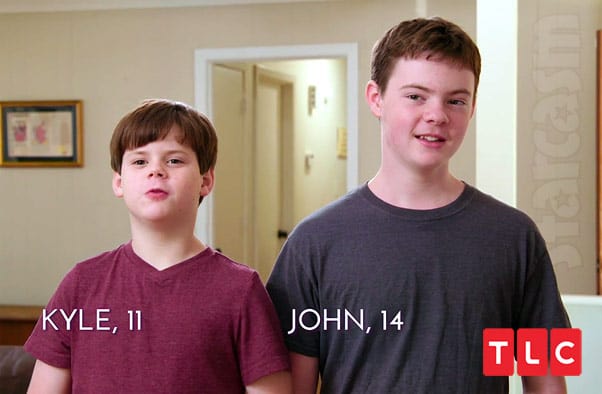 I completely agree with Jodie in that John and his younger brother Kyle seemed like two of the most polite, kind, and often quite funny kids to ever appear on a reality TV show. I literally cringed when I saw that John was responding in our comments section because I know first hand what a dangerous and unpredictable environment that can be. (I spoke with a family member that confirmed it is John’s account.)

I will confess that I thought it was a bit odd that John was on a reality TV blog’s Instagram page responding to comments about his dad just after his passing, but then I realized that I have no earthly idea how I would have reacted if my dad was in the public eye and passed away unexpectedly at the age of 41 when I was just 15. It began to make more and more sense to me the more I thought about it.

Regardless — John was there, and he was responding to critics and supporters with grace and class as he was obviously struggling with the sudden loss of his dad. This whole post was inspired by his comments, and it’s really just about giving him a better platform to express the love and respect he had for his dad Bernie McGee, and also the love and respect his dad had for his son and the rest of his family. That should be first and foremost in any conversation about Bernie right now.

John, I was a huge fan of your dad and he is on a very short list of reality stars that I think I would have enjoyed spending a lot of time with. I am so sorry for your loss, and for the loss of your family and everyone that knew and loved Bernie personally. Life can be cruel because the more loving a parent is, the more painful it is when we lose him or her — especially at such a young age.

OK, I’m going to step out of the way here and let John speak for himself.

COMMENT: I was not fan of him but this is super sad. I think he really loved his boys and so sad right before Fathers Day ?

JOHN: He did, and he was a fantastic father. I would never have traded him for anything. We miss him so much.

JOHN: Thank you so much

COMMENT: [In response to Paige claiming that the stress from her brother Patrick Marble’s charges of harassment against her and Bernie — and the resulting arrests — were the main cause of Bernie’s heart attack.] Like his health had nothing to do with it ?

COMMENT: exactly ….. really overweight was likely the heart attack reason , or part of others, not a healthy man ….

JOHN: He died from a heatstroke-induced heart attack on a bike ride. Over the past few weeks, he’s had an increasingly more painful stress-induced migraine, so yes, stress helped quite a bit, and it’s basic knowledge that stress is deadly. He was at the gym everyday and did his best to eat right. Frankly, the doctors all said he was healthy. Please, if you can’t say anything good then don’t say anything; that was my dad and I don’t have him anymore. I loved him.

COMMENT: I’m so sorry for your loss John. My father passed away in 2007 and it still hurts. His name was also John. Please trust God to carry you through this difficult time and ignore anyone who is cruel. ❤️

JOHN: Thank you so much, and I will. He meant a lot to me 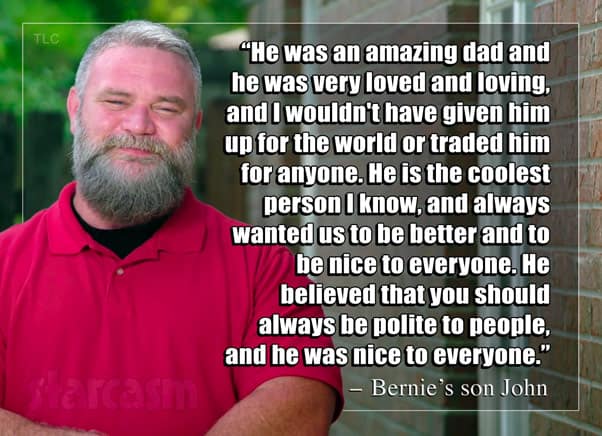 COMMENT: I’m so sorry for your loss I know how you feel as my Dad is also gone …. I did watch the show and saw how overweight your dad was, which screamed unhealthy …. it’s sad that just when he was starting to change tragedy struck …..

JOHN: Well thank you but no, he’s been trying to change for years, but every time he did something would happen. The first time, someone rear-ended him far too fast and the doctors said he wouldn’t walk again. Another time he tore his elbow lifting weights. Things like that. Actually the car wreck mentioned earlier is really why he got the way he is now, because he literally couldn’t do anything and the shots they gave him (like steroids, I think) helped him retain the weight, and he hated it. He tried so hard for so many years to lose weight, but something always would happen.

JOHN: I’m sorry, I’m not trying to be rude or anything by correcting you, I just wanted to get the story out. His visitation was tonight so it’s all on my mind

COMMENT: I’m so sorry for you loss . He was such a nice man

JOHN: He really was. I wish everyone could have experienced it firsthand, because he did everything he could to make everyone happier

COMMENT: I could see that from the show . How’s your mom?

COMMENT: I loved this guy. This is just so sad. I feel for his wife and children. I know first hand what this is like. My husband passed at 35 unexpectedly, we had 3 kids, 15, 12, 9. I hope everyone is kind and supportive with the family. RIP

JOHN: I am so sorry for your loss. Nobody should have to go through that, especially while so young

COMMENTER A: Do they not get paid for the show? Just curious,not being ugly but I’m just wondering why a gofundme?

COMMENTER B: exactly !!! Just another way to make money ?

COMMENTER: funerals are very costly and im sure it’s a burden given the fact he is GONE! That was not only ugly but flat out RUDE! NO1 ASKED U UR OPINION, JUST LIKE I GAVE MINE WITHOUT BEING ASKED. That is SO tacky

JOHN: @CommenterA No, we GOT paid for the show. We got paid per episode once they aired, but not any more. The Go-Fund-me was a gift set up by someone else, not by us

JOHN: @CommenterB It was a gift, do people not like gifts anymore?? There are so many people asking that is why I ask. Dang, especially during this time, we may need it. But thank you for your consideration

COMMENTER C: Why does everyone need a gofundme when someone dies? This is sad, but it’s just crazy that everyone starts them

JOHN: @CommenterC It was started as a gift, not by us. It was created because now a lot of things are going to have to change. My mother will now have to get a job as she stayed home to homeschool us and my dad supported us. We’ll need to either get a house or keep renting. Etc. So while you do have a point, it is nice.

COMMENTER C: I am truly sorry for your loss I was just wondering why these are started alot. I will pray for your family.

JOHN: @CommenterC Thank you, and I get it and agree, I just wanted to get it out.

We have an obituary, funeral information, and a GoFundMe link to help the family of #SeekingSisterWife star Bernie McGee, who died on Saturday at the age of just 41 https://t.co/Evcbg43RxK

@realitvpod: Heartbreaking. It’s clear he was a great dad because his boys were the most kind, genuine, welcoming and polite kids no matter the circumstance. May they find time for healing and with support from everyone, no matter whether you enjoyed the show or not. It’s reality TV, not real life, and this family deserves to be surrounded my positivity and love as any other family would. @john.mcgee.03 you got this?❤️

JOHN: Thank you so much! Yes, he was an amazing dad and he was very loved and loving, and I wouldn’t have given him up for the world or traded him for anyone. He is the coolest person I know, and always wanted us to be better and to be nice to everyone. He believed that you should always be polite to people, and he was nice to everyone. What you wrote is the best and most inspiring I’ve seen in a long time, thank you

COMMENT: I think we all think that of our dads …. most women do work and don’t have the option of not doing such, it is a sad reality for you . My heart does go out for you and your brother and mother …. stay close to her as she really needs your love right now ….

JOHN: I will, she needs it

COMMENT: We are sending you and your brother and mama all our love and support. I know what this is like and how bad it hurts. You will be in our prayers endlessly and we will help in any way we can. ((Hugs))