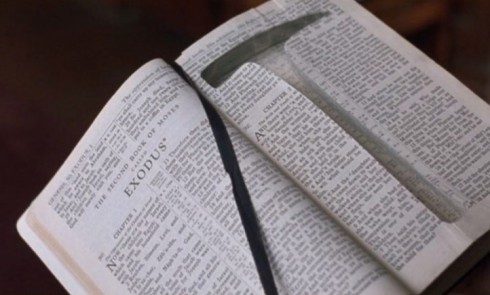 Shawshank Redemption has arguably taken the strangest road in cinema history to reach the plateau of immortal film status.  Primarily dismissed by fans during its run in the theaters it found a second life via the VHS and DVD rental market and is now consistently rated by fans on IMDB as one of the top 5 greatest films of all time.  As of this post it is number one, ranking above The Godfather and The Godfather Part II.

For the millions who love the film’s tale of hope and friendship the movie goes way deep often providing a symbolic means by which fans judge their own decisions and measure up their own lives.  I don’t think you can ask much more of art in any form and I’m certain that this film will live on for a long long time after I’ve escaped this Earthly domain.

“Well, if it was a toothbrush I wouldn’t ask questions, I’d just quote a price, but then a toothbrush is a non-lethal object, isn’t it?”

That’s what Red told Andy when the soft spoken new fish asked, “the man who knows how to get things” for a rock hammer and a rock polishing cloth so that he could begin to build his own pieces of a chess set from various forms of rocks found around the grounds of the prison.  Later, when Red, the Warden, the guards and the rest of the inmates of Shawshank realized that Andy had used that same rock hammer to ever-so-slowly free himself from the walls that entrapped him Red had this to say:

“In 1966, Andy Dufresne escaped from Shawshank prison. All they found of him was a muddy set of prison clothes, a bar of soap, and an old rock hammer, damn near worn down to the nub. I remember thinking it would take a man six hundred years to tunnel through the wall with it. Old Andy did it in less than twenty. Oh, Andy loved geology. I imagine it appealed to his meticulous nature. An ice age here, million years of mountain building there. Geology is the study of pressure and time. That’s all it takes really, pressure, and time.” 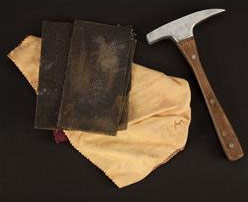 Everything about the undying hope and the soul’s need for human companionship that permeates this picture can be summoned up and bound in that little warn down to the nub rock hammer.  It’s the physical embodiment of one of cinema’s all time moving and affirming lines, “Get busy living, or get busy dying.”  Just writing that makes my hair stand up on end and strengthens a resolve that comes from within.  No other movie does that for me.  I guess that’s the power of the film.

Well folks, what I’ve been getting to in this build up of Andy Dufresne’s rock hammer is this; the original one used on film, the one you see Andy accidentally pull a chunk out of his cell wall with, the simple catalyst for the moment when that dangerous word “hope” creeps into the film and subsequently becomes the defacto main character, is up for auction.  I am not kidding you, this is for real and it is legit as can be!

Director Frank Darabont has donated that rock hammer as well as the polishing cloth to an auction house and it is being sold via an online auction through icollector.com here.  All proceeds from this sale will be donated to charity at the request of Mr. Darabont but I ask how do you begin to put a price tag on this type of memorabilia?  The reserve was a mere $1,000 dollars and as of this post the current bid stands at $1,100.

According to the site the online auction will begin at 11:00 AM PST on May 15th. 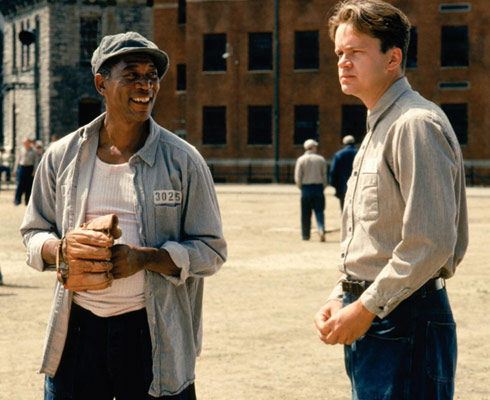 I would argue that there isn’t a more symbolically important movie prop in the last quarter century of film.  My hope is that whomever claims this historic piece of Americana is moved to display it in a place that is welcoming to fans of the film.  I’m telling you right now I would flat out cry if I held that rock hammer in my hands, it means that much to me and I know I’m not alone.

It’s our modern day version of John Henry’s fabled hammer, a delicate and small tool far removed from Henry’s 30lb steam drill killer,  yet its endurance and place among folk fable is just as strong and resonant.

An institutionalized Red told us the following as he faced the hard realities of life outside the walls he had grown to know as home:

“There’s a harsh truth to face. No way I’m gonna make it on the outside. All I do anymore is think of ways to break my parole, so maybe they’d send me back. Terrible thing, to live in fear. Brooks Hatlen knew it. Knew it all too well. All I want is to be back where things make sense. Where I won’t have to be afraid all the time. Only one thing stops me. A promise I made to Andy.”

“Only one thing,” and I imagine Red thinking back to when he was first asked by Andy for that rock hammer when he remembered his promise and made his own decision to get busy living.

As a tribute to the original writer Stephen King, director Frank Darabont, Tim Robbins and Morgan Freeman I would like to dedicate the following version of “John Henry” as performed by Bruce Springsteen with the Seeger Sessions Band:

If you do not own the Anniversary Edition that includes a documentary about the ground swell of passion for the film as well as a great Charlie Rose interview with Darabont, Robbins and Freeman I encourage you to pick up a copy here.