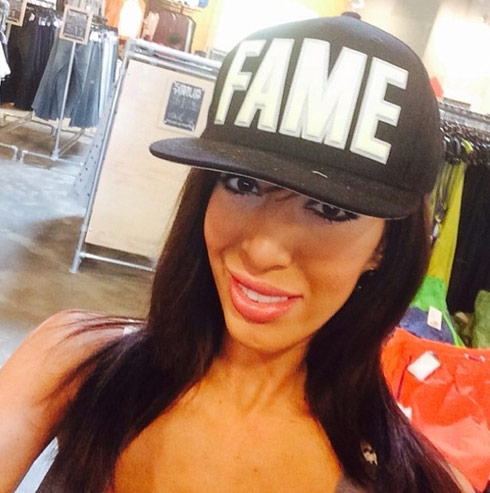 Farrah told E! News about her new gig with the pole:

“A friend of mine works there and I’m researching. I’ve been trying out all the roles that make up a gentleman’s club, including cocktailing and dancing. There’s management and there’s cooking too. It’s job shadowing that I hope pays off.”

Now Abraham is promoting this new endeavor via social media and by all accounts it looks like she’s taking this research very seriously!

Farrah will be performing at the venue as a “celebrity house feature” from August 22 until New Years Eve and appears to be going by the stage name “Surreal.” She will be available for private fantasy sessions on Wednesday and Friday nights which you can book by either calling or contacting the club.

Farrah spoke with Radar and revealed that she was offered over half a million dollars to hit the stage.

“I’ve learned that this industry has class, strength, and has taught me life skills to better myself for my daughter’s future. I’m thankful and shocked that my job shadowing has lead me to another amazing opportunity. Palazio Gentlemen’s Club has shown me and other women how we should be respected, treated and cared for and not to settle for less,” she continued. “The owner, management and staff have all been caring and wonderful to work with.”

And if you’re seriously interested in researching Farrah’s research – you better come with some serious cash in hand. The rates to watch Abraham are $2,500 for an hour or $500 for just 10 minutes.