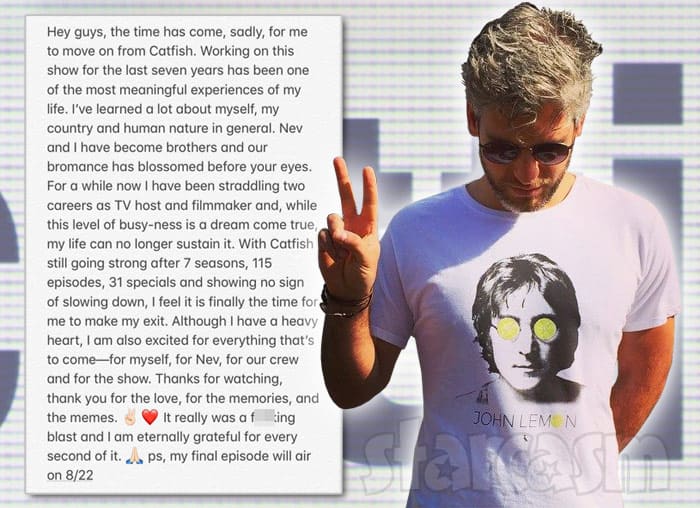 In what could very well be the biggest bro breakup since Simon and Garfunkel, Catfish hosts Nev Schulman and Max Joseph will be parting ways on screen as Max announces the current season will be his last.

“Hey guys, the time has come, sadly, for me to leave Catfish…” Max tweeted earlier today, along with the following statement:

Hey guys, the time has come, sadly, for me to move on from Catfish. Working on this show for the last seven years has been one of the most meaningful experiences of my life. I’ve learned a lot about myself, my country and human nature in general. Nev and I have become brothers and our bromance has blossomed before your eyes. For a while now I have been straddling two careers as TV host and filmmaker and, while this level of busy-ness is a dream come true, my life can no longer sustain it. With Catfish still going strong after 7 seasons, 115 episodes, 31 specials and showing no sign of slowing down, I feel it is finally the time for me to make my exit. Although I have a heavy heart, I am also excited for everything that’s to come—for myself, for Nev, for our crew and for the show. Thanks for watching, thank you for the love, for the memories, and the memes. ✌️❤️ It really was a f**king blast and I am eternally grateful for every second of it. ? ps, my final episode will air on 8/22

Nev followed suit by tweeting: “It is with a very heavy heart, that all of us at the #catfish family say goodbye to @maxjoseph – Good luck Max, love you brother.” He also added a lengthy statement on Max’s departure:

Working with Max on Catfish has been a blast. What started as a casual friendship quickly turned into a brotherhood. Over the last six years I’ve learned as much about the Internet and society as I have about myself, Max being there and helping me through every step of the way. In that sense, Max isn’t just a co-host, he’s a partner, therapist and brother. His ability to listen, empathize and advise is astounding and has made me a better man. Nobody cuts through the noise and dishes the hard truth better than he does. I’m going to miss him a lot. He’s my best friend. Period. And of course one of the best colleagues anyone could hope for. As sad as I am that Max is leaving the show, it brings me great joy to know that he is following his heart. While selfishly I’d love to keep him all to myself, the world needs more passionate, creative people and we’ll all benefit from his work to come. If you don’t already know about Max’s amazing projects as a filmmaker, check out his website maxjoseph.com. Good luck my friend…and no excuses for not facetiming in from time to time. I know your front-facing camera works. Love you brother.

Apparently, some fans saw Nev’s tweet and didn’t read the attached statement, and began to assume that Max had passed away! Nev was quick to clarify with a follow-up tweet. “FYI max is not dead. He’s just leaving the show. Sorry,” Nev wrote.

If you’ve been watching the current season, then you know that Nev’s wife Laura Perlongo has been trying her hat at co-hosting the show, and Nev seemed to foreshadow a potential changing of the guard with a tweet on Tuesday. “As much as Max likes to snuggle, I would prefer having my beautiful wife on the road…” he wrote. Well, it seems Nev may have gotten his wish!

We’ve been fans of Catfish since the very beginning, and a large part of that is because of the genuine good heartedness and empathy of both Max and Nev. (Max is featured on our @Starcasm Twitter banner for gosh sakes!) We’ve done numerous stories about the wide array of characters featured on the series, and created our fair share of the memes that Max mentioned. So, in honor of Max leaving the show, I thought I would compile my Top 3 Favorite Nev and Max hair-themed Starcasm moments from over the years:

Visited a Halloween costume pop up shop and was pleased to see they had both @NevSchulman & @MaxJoseph! #Catfish pic.twitter.com/KMiQNA0ZkE

1. MAX AND NEV AS TROLLS

So long Max, we will certainly miss you! You were so much better than that other ass Nev had for a partner…

I'll admit, this is kinda funny… “@starcasm: It turns out @NevSchulman has a hairy ass too! http://t.co/lxPv74cUmg pic.twitter.com/xVvMD29aqR”

Top 10 quotes from the new Catfish Season 4b trailer