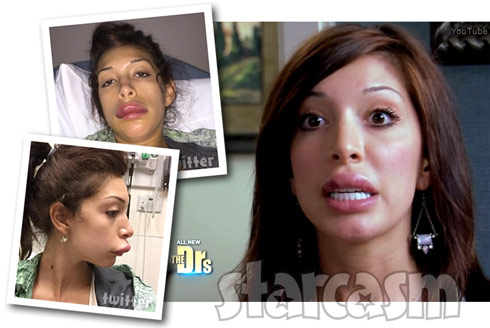 Farrah Abraham, 23, is still recovering from her recent botched lip surgery, but the controversial reality star says she’s already planning her next enhancement!

The former Teen Mom star chatted with the hosts of morning talk show The Doctors on January 27 to share her botched lip surgery experience. The MTV personality said she had a severe allergic reaction to the numbing agent her surgeon applied before the procedure even began.

In case you missed it, Farrah Abraham shared photos of her swollen lips on her Twitter account January 6, with a caption that read, “Girlfriends, don’t say I didn’t warn ya! #BOTCHED” It was later rumored that her experience might land her on an episode of Botched, and photos later surfaced of Farrah and Botched co-star Dr. Terry DuBrow together at his office, adding fuel to the rumor fire.

Farrah says the experience did not turn her off to future plastic surgery, but she plans to do careful research before going under the knife again. “I’m happy I’m alive,” she told viewers. Regarding her interest in butt implants, Farrah explained, “I’m still doing research. I don’t want … problems.”

Farrah has had other plastic surgeries in the past, including a chin implant, a nose job and multiple lip injections. She has also had her breasts augmented at least twice.