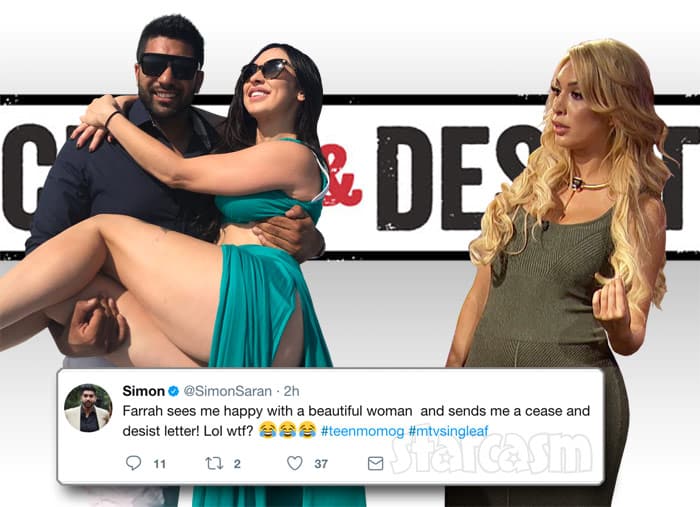 Teen Mom OG stars Farrah Abraham and Simon Saran cleared up any questions about the current state of their relationship yesterday when they attacked each other on Twitter in an explosive war of words that included angry accusations, name calling, and (of course) the obligatory screen capped text messages. Things seemed to quiet down as quickly as they got loud, however, as Farrah moved on to tweets about her surreal appearance on the Teen Mom OG Dr. Drew Check In special last night.

Simon slipped in a couple more quick punches, though, including a tweet ‘n’ delete alleging that Farrah sent him a cease and desist letter in reaction to him posting photos with his mystery woman last week. (All of this while Farrah is traveling the globe filming a dating reality series mind you.) Simon also took the time to answer a young lady’s question about Dr. Drew’s claim that Simon wasn’t on the special last night because he demanded $250,000 to appear.

Here are Simon’s tweets that were later deleted — possibly because of the cease and desist letter? 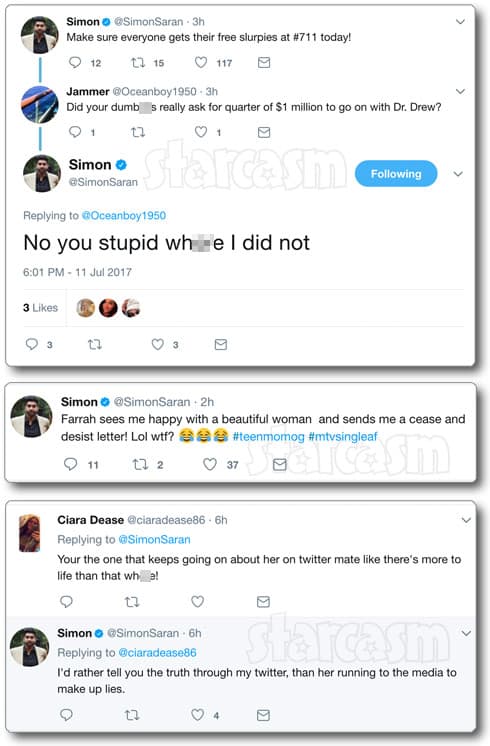 UPDATE – In case you missed it, here is the clip in which Dr. Drew says it is his understanding that Simon isn’t there for the taping because he demanded a quarter of a million dollars to appear and MTV said “no.” That happens right at the 1:25 mark. As a bonus, we also have Simon’s reactions to the clip from Twitter just moments ago:

I had real work related commitments. That's why I didn't come.

If you’re like me, then Simon’s tweets leave you wondering only one thing: Does 7/11 really give away free Slurpees on 7/11?! Apparently yes! D’oh! Just another reason to ALWAYS check Simon Saran’s Twitter feed regularly!

I’ll wrap up this post with a song I think Simon and Farrah could apparently dedicate to each other at this point in their relationship. The original Bob Dylan version is one of the greatest recordings of all time, but his people are diligent Youtube copyright police, so we will just “settle” for Johnny Cash for Simon and Dolly Parton for Farrah…

Are Will Smith and wife Jada Pinkett Smith separating?