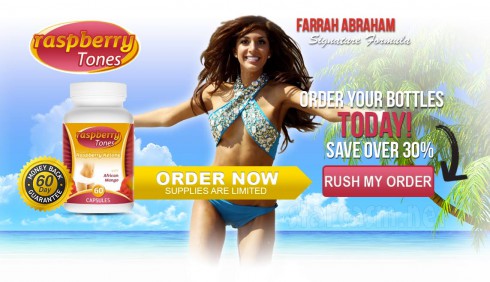 Seemingly proving the saying “there’s no such thing as bad publicity,” former Teen Mom star Farrah Abraham’s willingness to open her backdoor for James Deen and the rest of the world is opening new doors for her — including a reported six-figure endorsement deal with a company that sells “natural” weight loss pills.

It was announced earlier today that Farrah Abraham will be endorsing Raspberry Tones, which uses the naturally occurring compound called raspberry ketone (found in very small quantities in raspberries, cranberries and blackberries) to “slice up the fat in your cells and supercharge your metabolism to turn your body into a 24-hour a day fat-burning furnace!” according to the company’s website.

Here’s a video of Farrah talking about how much she loves the product:

UPDATE – Farrah just added a Keek video as well in which she sings the praises of Raspberry Tones and tells everyone to try it out so they can “have fun bein’ hot and sexy as me:”

Farrah also tweeted her support of Raspberry Tones just a short while ago, writing, “Everyone always asks how I stay in shape, here’s my secret http://bit.ly/15jbioC Enter coupon code ‘FARRAH’ at check out for FREE shipping”

According to sources for TMZ (i.e. Farrah), “Farrah loved the idea of endorsing a health product and couldn’t pass up the payday.”

A rep for the company tells the site, “Farrah represents a growing audience of young, active people who take care of their health and use only natural products to look and feel great. Farrah looks fit and fabulous, and takes care of her body, and a lot of health-conscious people can look up to that.” 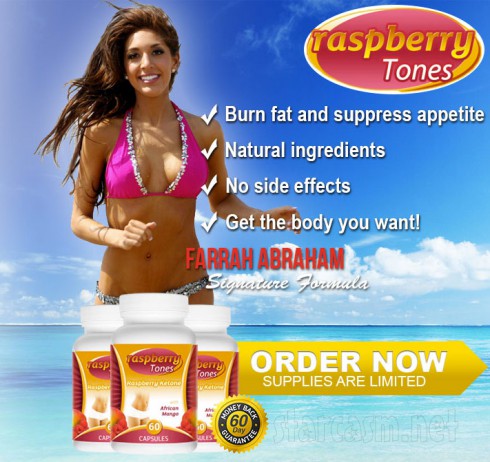 The makers of Raspberry Tones claim to have not been turned on to Farrah via the publicity surrounding her now-infamous sex tape (which I’m thinking should now be retitled Assbury Bones), but the bikini photos of Farrah that she posed for last month, many of which are now being used on the company’s website and Facebook page along with “Farrah Abraham Signature Formula,” whatever that means.

Of course choosing Farrah Abraham to endorse their product is somewhat of a gamble that could potentially backfire with reactions like this one from Honey Badger Freyman on Facebook:

But then again, signing Farrah means websites like ours are going to be writing about their product, so it’s kind of hard (that’s what Farrah said!) to argue with. That being said, would you like to know more about Raspberry Tones?

Raspberry ketone has taken the diet and fat-loss industry by storm! It is no wonder that it’s been covered by TV personalities, doctors and researchers, and every major news publication in the last few months. Raspberry Ketone works, and thousands of people are using this miracle fat-burner to lose pounds fast, and keep them off, without resorting to crash dieting or excruciating exercise plans.

There is a reason Farrah uses Raspberry Tones, it provides a safe, simple and effective solution to lose fat and get the body you deserve!

Raspberry Tones is the 100% all-natural and safe way to burn fat fast and keep the weight off. You can experience the amazing effects of Raspberry Ketone yourself by ordering today while supplies last. All orders are risk-free and backed by our 60 Day Money Back Guarantee of satisfaction. No unwanted shipments, no confusing club memberships, just the purest Raspberry Ketone supplement on the market, shipped Rush Delivery to your door immediately. Raspberry Tones is proudly made in the USA from only the highest-quality natural ingredients. With our special quantity discounts available only online, you can get what one Doctor calls “Nature’s perfect fat-burner” for less than two dollars a day. Order Raspberry Tones today, and take control of your health.

And just in case you needed a little non-biased endorsement of raspberry ketone from some who probably hasn’t been paid to have sex with James Deen, here’s Dr. Oz with a lot of positive things to say about it:

On a random side note, is anyone picking up a “That’s what she said!” vibe from the wording on the Raspberry Tones order form? 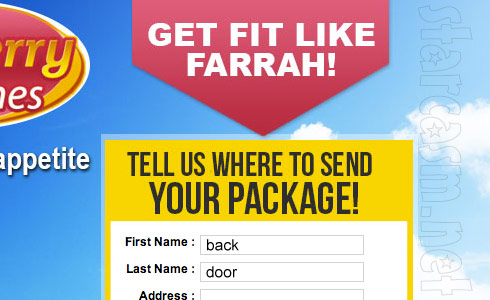