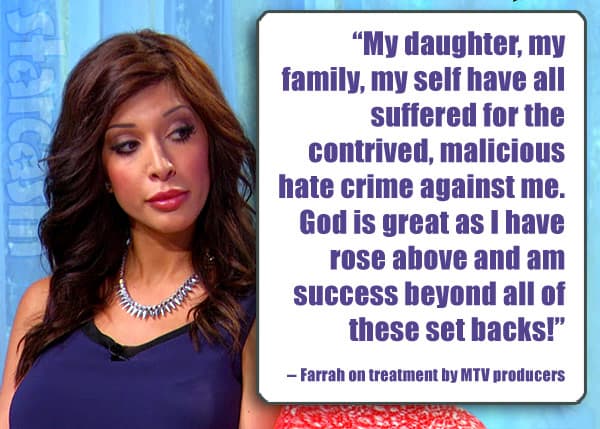 The Teen Momiverse is still in shock over the firing of Farrah Abraham, but moments ago the 26-year-old (former?) reality star posted a video explaining that the legal department for MTV’s parent company, Viacom, says she has not been fired at all. That did nothing to assuage Farrah’s outrage, however, as she lashed out at Teen Mom OG producers over the “fake firing” that she describes as a “hate crime.”

Here is the clip from Farrah:

Farrah says in the video that she “hasn’t been the strongest” over the years, admitting that she has been in therapy and has been depressed. She talks about the death of Sophia’s father Derek Underwood, who Farrah says she “didn’t get to speak to beforehand” because of Teen Mom co-creator Dia Sokol. She adds that her parents have been “mind manipulated” and “mind f**ked” by show Executive Producer Morgan J. Freeman. The video cuts off abruptly and Farrah says that there is a longer video on her Snapchat, but I can’t find it. (Perhaps she has my account blocked?)

In addition to the video, Farrah posted a VERY lengthy caption in which she UNLEASHES on MTV, Morgan Freeman, and more:

Viacom Legal Confirms I have not been fired, I have not breached my contract”. Why has filming stopped?! Morgan J Freeman of 11th St productions is unprofessional, fake, women hater, press hungry,Sex Shaming, Hate Crimes, Poor Business Practices , unsafe working environment & accomplists Dia Sokal anxious 11 production , Viacom associate pill popping Larry Musnik , & Executive promoted alcohol binger producer Kirsten Malone, taking advantage and acting as a friend to spread jealous , hate crimes to the other teen moms & influence a toxic unsafe working culture, that’s why I don’t share a stage, I have security, I’ve gone to therapy! Do not beat up, instigate physical fights, ruin and break a women’s self esteem, degrade women, this hate this criminal behavior bad business practices end today! My daughter , my family,my self have all suffered for the contrived, malicious hate crime against me. God is great as I have rose above and am success beyond all of these set backs! I look forward to sharing more in my first #BussinessBook ? Thank you for making this world a better place with me! #BossMom #Ethics #viacom #mtv #teenmom #mtv #hatecrimes #farrahabraham #children #moms #fake #hate #crime #feministhate #feminist #womenempowerment (SEE MORE ON #snapchat )

Farrah also posted a clip alongside daughter Sophia. “Sophia would like to share how she’s been affected by all of this,” Farrah says.

“I’m proud of my mom for standing up for other…” says Sophia before the video cuts off.

I support my mom making entertainment a safer environment for other kids and moms! Go Mom! Shame on you @mjfree @mtv @Viacom @AnxiousEngine pic.twitter.com/oXGosSLTXN

It is still unclear exactly what all of this means as far as Farrah’s future (if any) on Teen Mom OG.

We are working on getting some more details, including information on exactly what happened on Monday, so stay tuned!