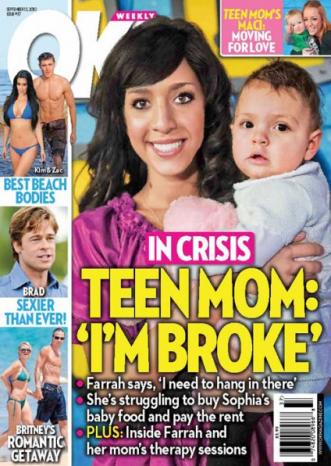 The National Enquirer has a story about 19-year-old Farrah Abraham drinking underage in an Omaha bar and then brawling with her 23-year-old sister Ashely Danielson.

Teen Mom Farrah Abraham got wasted in a seedy Omaha nightclub drinking with a fake I.D., then got into a drunken brawl – with her own sister!

Ashely, who went on a Facebook tirade against her sister during the February domestic violence drama, did not mince words about her sister to the Enquirer:

My little sister is a spoiled, thankless brat and needs to seriously grow up – not just for herself, but for her baby daughter!

Here’s part of what Ashely posted about Farrah on Facebook earlier this year:

Mother of the Year” award goes to Farrah! She’s been watching my neice a little more then usual since she screwed herself by attacking my mother, but then leaves my neice at my house all weekend with my grandparents, the short time Sophia has been in her care she’s gotten sick n lost weight… Everyone needs to pray f…or Sophia in this mess. I’m hoping my mom’s lawyer can prove her innocence and hopefully we can get a better parenting situation figured out for my bubba! Way to go mommy of the year! Freakin loser!”

Most families are dysfunctional, but wow. Farrah and her family are starting to give Catelynn’s family a run for their money!

Hopefully they’ll get some intensive therapy so Sophia doesn’t enter into this destructive cycle.

Read about the tragic death of Sophia’s dad, Derek Underwood.