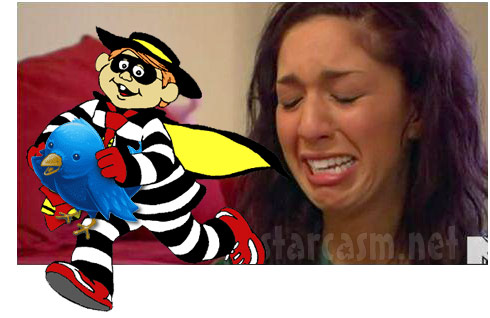 As we reported earlier, former Teen Mom star Farrah Abraham had her Twitter account hacked and the culprit (who was apparently a “[spineless] boy”) tweeted a bunch of nasty things about Farrah, including an obscene image claiming to be her. Earlier today Farrah announced on Twitter that “Hacker Control is happening” and she has since posted a long statement on Sulia addressing the incident.

In the statement (which includes our Farrah Abrahamburglar image above btw!) Farrah reveals that the culprit was a former male friend of three years that she turned in to police for selling prescription pills. Farrah says he did it because he was “upset” and/or “envious of my artistic abilities, literary aspirations, and future success I will have.”

Here is Farrah’s statement in its entirety:

#HACKERS who hack me (what happened)?

SO yesterday was a surprise

as many of you noticed yesterday some crazy , attention crazed, disgusting, weak and spinless boy (dare I say man) hacked my account.

The reason; other then clearly being upset with my and or envious of my artistic abilities, literary aspirations, and future success I will have out of my current achievments. I also new this person for three years and cuaght what I thought could be a stand up and successful person selling pharmasuetical pills. (my past has seen this before and normally I would just leave that person behind and hope one day they quit dealing drugs and ruining their life, but sadly in my past those people have died or are now in very poor conditions) so I turned this person in to the police and others who could maybe help him better then myself, so the good deed , encouraged an addict, drug dealer, who is also an A student to retaliate and try to spread his negativity further. (retaliate)

Personally I do not care what was sad or done, but publically I feel very sorry for those who saw and read the negativity, or saw pornagraphic disgusting photos of some sort and could possibly have thought “WOW , I Can’t believe Farrah is doing this, or would treat her fans or anyone this way”

-So I feel bad for the young adults who saw this, but truly the real person who should be apologizing is the spinless boy who did so, just know all is taken care of.

Others who deal with fake friends, or just people who have been brought up wrong and who are jaded, remember Judice will be served and you don’t need to worry about it.

AS my wonderful fans tell me: “your future is bright and the reason why people hate is because your doing a great job, keep your head up, because were watching”

All my wonderful artistic accomplishments I love my envolvement I have had with MTV’s 16&Pregnant, MTV’s Teen Mom, my best selling book “MY TEENAGE DREAM ENDED”, and soundtrack, my wonderful collaberation with my talented and beautiful daughter for our children’s book “Passy Perfume” . I’ve made history, I’ve top new heights for single parents and teen mothers, and I never comprimise, sell out, or sugar coat truth. For that if I die tomorrow I’ve happily been passionate, caring and lived life right without out holding back, so good bye to the fakers, wanna be’s , lost denial people, negative haters.

TEEN MOM Being Javi and Being Gary premiere dates announced