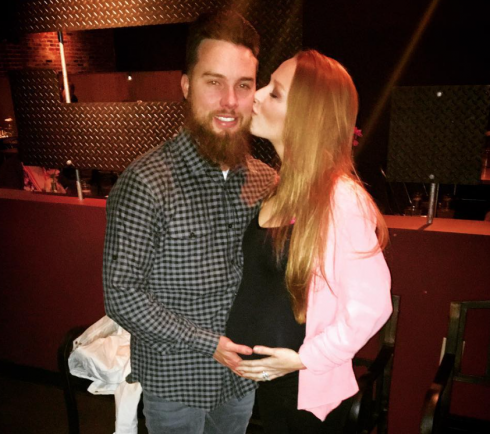 Major congrats are in order! Teen Mom OG‘s Maci Bookout is pregnant with her third child, she revealed to the surprise of fans on Valentine’s Day. The newly engaged MTV star made the announcement with an Instagram picture of her and fiance Taylor McKinney.

Taylor followed up with a (slightly less romantic) post of his own.

If it seems it hasn’t been that long since Maci was expecting baby Jayde, you’re right. Maci told MTV she could potentially have Irish twins on her hands, because baby No. 3 is due on Jayde’s first birthday, May 29.

“I found out I was pregnant with baby number three right after we got engaged,” Maci reveals in a new MTV video. “It was not expected or a planned pregnancy.”

Regardless, Maci seems thrilled to complete her family. Congrats!