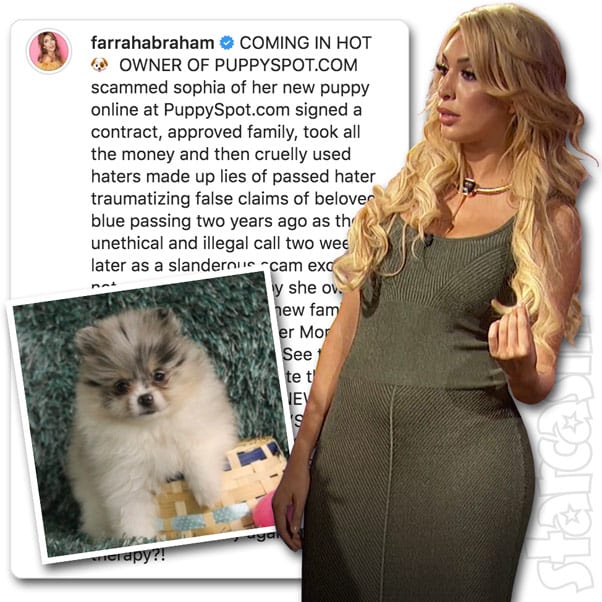 Former Teen Mom OG star Farrah Abraham and daughter Sophia Abraham took to YouTube on Sunday to announce that they were adding another living creature to their growing social media empire in the form of a Pomeranian puppy named Manny. The video revealed that they were purchasing the dog through the website PuppySpot.com, which was then inundated with emails and DMs demanding that the site not sell Manny to Farrah. As a result, the website canceled the order, despite the fact it was already paid for.

Farrah soon found out, and she WAS NOT happy! She expressed her outrage in true Farrah fashion with an Instagram post earlier today.

As usual, I will just step out of the way and let Farrah speak for herself:

COMING IN HOT? OWNER OF PUPPYSPOT.COM scammed sophia of her new puppy online at PuppySpot.com signed a contract, approved family, took all the money and then cruelly used haters made up lies of passed hater traumatizing false claims of beloved blue passing two years ago as the unethical and illegal call two weeks later as a slanderous scam excuse to not send her new puppy she owns, Sophia won’t have her new family member for Easter. Super Mom Farrah & Family step in! See the public review Farrah wrote this morning & listen to this NEW EPISODE ABRAHAM GAL’S EP. #4 of “DON’T BUY YOUR DOG ONLINE FROM PUPPYSPOT.COM RECORDED CALL FROM OWNER”. How malicious can a online dog seller be to traumatize a family again after therapy?!

As Farrah mentions in her post, she shared a new episode of her and Sophia’s podcast Abraham Gals (included below) dedicated to the PuppySpot cancellation.

Farrah begins the podcast episode titled “DON’T BUY A DOG FROM PUPPYSPOT.COM FRAUD CALL FROM OWNER” by telling Sophia it might have been a bad idea to announce online that they were getting the puppy before it actually arrived. “The haters just are ruining it,” Farrah says. “And honestly, the breeder isn’t strong enough to understand the hate and the celebrity that they’re dealing with.”

For some reason, Farrah then calls her step-mom Amy and recounts her conversation with a customer service rep from PuppySpot about the puppy purchase being canceled. “She says based off of me throwing my dog off of a balcony, I’m not going to be allowed — me — to have my own dog that I paid for,” Farrah explains to Amy.

Farrah says she informed the customer service rep that the decision was made based on lies and that canceling the order is against the law. She demanded to speak to the owner of PuppySpot. “I’m not going to speak to some regular customer service care person who doesn’t even know what they’re doing. And if you talk any more, every bit’s recorded, and it’s illegal, and it’s gonna just take you right — right to where it’s gonna go. And I go, ‘So who is what?'”

Amy finally gets to speak, and she first tells Farrah to calm down. She then explains that PuppySpot probably has a clause in their contracts that allows them to cancel at any time during the process. She asks Farrah if they offered to refund her money.

“I don’t know,” Farrah replied. “She kept trying to say that, and I was, like, ‘I don’t accept that because it’s breaking the law.'”

Amy then says that she could get someone else to send the money under a different name. She says that it would need to be someone that hasn’t been connected to Farrah publicly. She finally concludes that Farrah’s cousin Shawn (sp?) would probably be best. (I don’t know if Amy is aware that she is being recorded for the podcast.)

Farrah and Amy share their frustrations, and then Farrah calls PuppySpot. The beginning of the call is cut off, but it picks up with Farrah laying down the law! “I don’t think you’ve ever dealt with somebody who’s in the public eye, but I will say this: We deal with a lot of very untrue, hateful, discriminating things that you won’t ever have the luxury of going through! So, you’re talking to one smart, intelligent, and tough woman. And I will say this: Any of your discrimination, your hatred, and the lies that you based anything off of, is illegal by law!”

Farrah points out that they spent two weeks expecting to receive the dog. “I take that to heart. I take that to realization of this is such a hate crime right now. And it’s discrimination, and it’s hateful.”

Farrah informs the customer service rep that she is currently in law school before schooling the woman on how much Farrah and Sophia care about their pets:

We are a family that deeply cares about our pets. Everything! About the breed, about how they look. I mean, we get so, like, discriminated against for anything and all things that we go above and beyond for our pets — for safety, for health, for all things. They actually have public Instagrams! That’s how much we care about our pets!

Farrah continues to yell at a customer service rep named Roxanne for quite a while before eventually giving up. The podcast then seems to restart with the phone call to Amy? 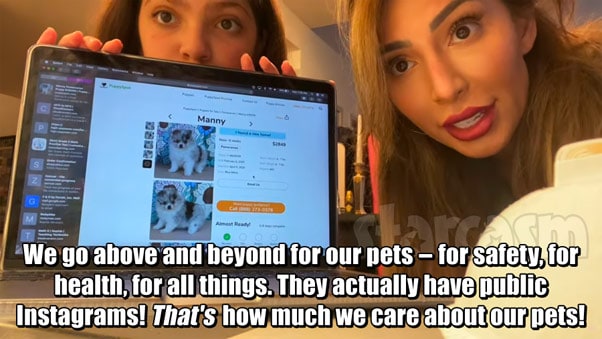 Meanwhile, Farrah took to her Instagram stories to share a screen cap of a review that she left for PuppySpot on TrustPilot.com. Here’s the review:

I just woke up after two weeks of thinking and my daughter and family thinking a puppy was on the way, we paid 5k for a dog upfront we never met, got approved, signed contract and had are [sic] money taken. The owner, and customer service and sales agents have no remorse and are scam artist. Link of full call recordings with customer service, owner all publicly on my podcast “Farrah Abraham – Abragam [sic] Gals Podcast Episode #4 Don’t buy dogs online from puppyspot.com

I checked TrustPilot and did not see the review. [UPDATE – Farrah’s review is there now, but it is blurred out and labeled as being reported.] I also checked PuppySpot’s social media accounts and did not see a statement about the cancellation of Farrah’s purchase. Their website does still feature Manny, and he is listed as being available to purchase.

#TeenMom @F1abraham posts an emotional video with daughter @SophiaLAbraham and their dog Blue after he passed away unexpectedly last night: https://t.co/SiAuV5KWpl Farrah says Blue has been her "right hand man" and she plans to "stuff him and put him on my shelf."
? #RIPBlue

In case you missed it, Farrah and Sophia’s Pomeranian Blue passed away in July of 2018. The dog reportedly died from a collapsed trachea combined with stress caused by nearby construction, but suspicions were raised online after a Music.ly post by Sophia’s account explaining what happened. “I was getting Blue to go outside and my only choice was to toss him outside,” the post read. “And then I did but then he went into shock and 30 seconds later he passed with no heart beat.”

It was the “toss him outside” remark that had folks concerned, and eventually inspired numerous headlines speculating on the true cause of Blue’s death.

Former #TeenMomOG star Farrah Abraham and her daughter Sophia have started a podcast called #AbrahamGals, and the official description does not disappoint! #TeenMom

Recently, Farrah was in the headlines again for accusations of improper dog care after she posted a series of videos of her Zuchon named Cupcake dyed pink with a ribbon tied around her mouth. Farrah explained that she was using “a muzzle per a trainer’s review for her training, which are sold at all pet stores.”

Peta was unimpressed as they issued the following statement addressed to Farrah:

Subjecting dogs to the stress of being dyed — which is also potentially toxic — and restricting their opportunities to eat, drink, and even breathe by tying a ribbon around their mouth are cruel acts that can have fatal consequences, and they show a profound lack of empathy.

PETA urges Farrah Abraham to start treating dogs like more than fashion accessories or surrender them to someone who will love them unconditionally.

For those of you curious to hear the podcast, here it is:

And here is Farrah and Sophia’s YouTube video announcing that they were going to get Manny: