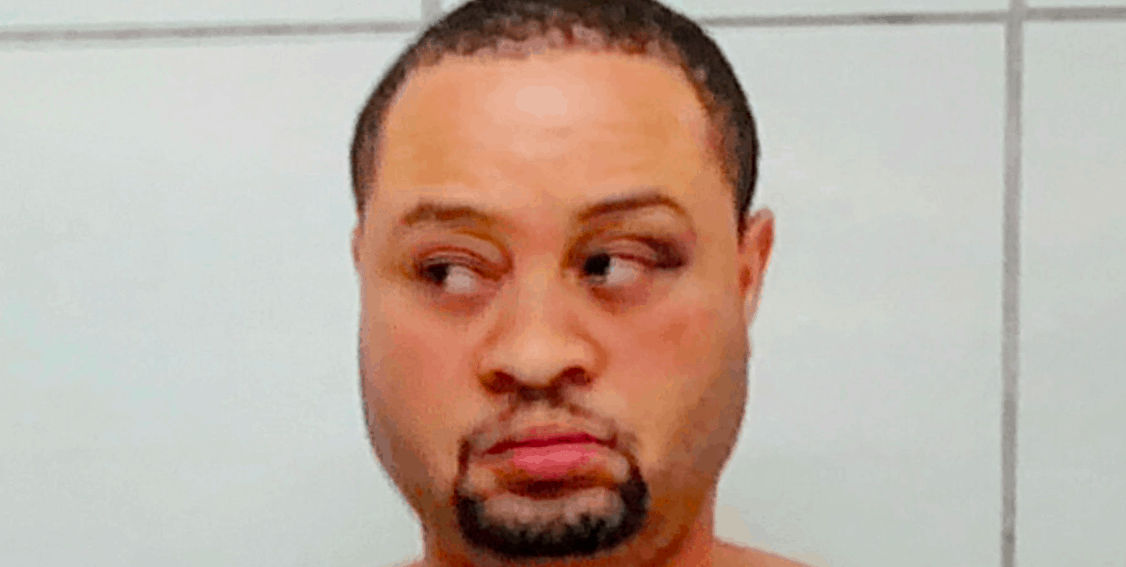 Tonight’s Season 10, Episdoe 3 of EVIL LIVES HERE is titled “Why Did I Let Him In?” and has domestic abuse victim Teshana Singleton tell her story of terror living with and being stalked by future murderer Cedric Ricks.

Teshana Singleton first took interest in Cedric Ricks during Bible Study night at church when she was only 15 years old. She wishes she had never been attracted to his charms. 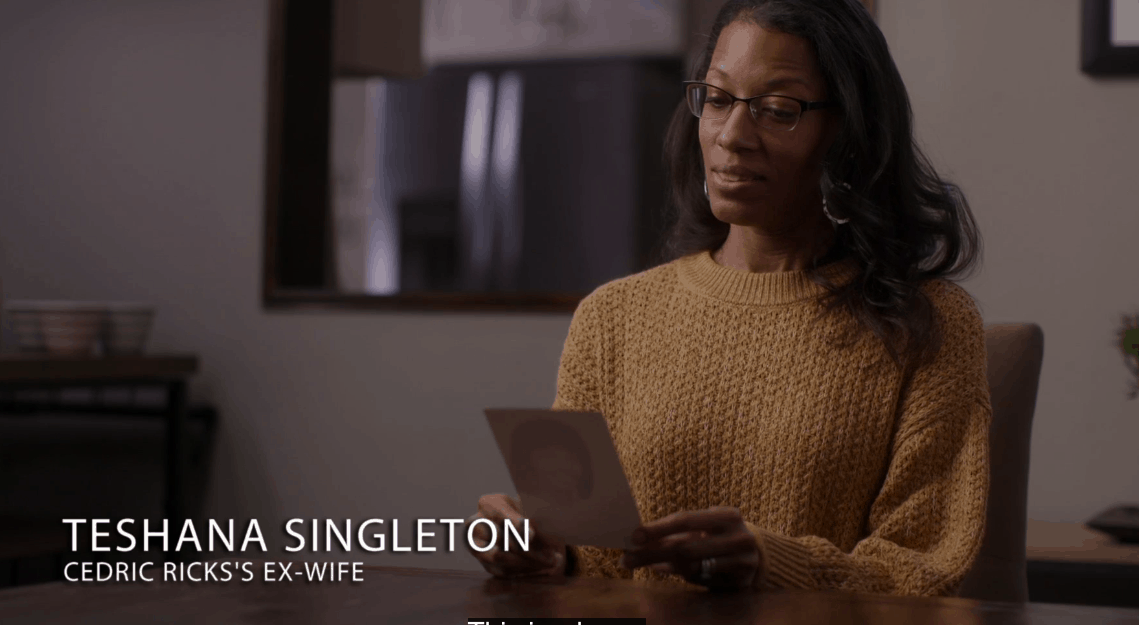 He ran with a crowd that tended to get into trouble and her parents didn’t approve of their relationship. She thought it was cool that he was older than her.

Teshana took someone else to prom because she knew her parents wouldn’t allow her to go with Cedric. She kissed her prom date, and Cedric found out. He got extremely angry and picked a fight with her prom date. After that, Teshana didn’t want to see him anymore and stopped speaking to him.

She moved on, graduated high school, and got pregnant with a new boyfriend. She was happy with her new family until one day Cedric called her out of the blue demanding to see her. She told him not to come, but he would not take “no” for an answer.

He came to her house, and she decided to hear what he had to say. She got in his car, and he immediately tried to initiate sex. She said he eventually wore her down and she had sex with him. She keeps thinking about how different her life would be now if she had not answered the phone that day.

After the birth of her daughter, Teshana ran into Cedric again at church. He walked in while she was changing her baby in the nursery. It was a shock to her. He says he was in town and wanted to “catch up” with her. It made her feel very uncomfortable. She let him know that she had a family and fiancé now.

She wasn’t afraid of him at this point, but looking back she thinks she should have been fearful.

Teshana and her fiancé broke up because he enlisted in the navy and they grew apart. After the breakup, she decided to give Cedric another shot. They started dating, and moved in together. One day, a woman kept calling.

He got extremely angry when she asked who the woman was. Teshana told him she was going to leave to go to her mom’s house. As she tried to leave, he grabbed her and choked her. She fought to breathe, and to stake awake, but she passed out. She thought that it may be the end for her.

When she woke up, Cedric apologized to her and said he didn’t mean it. This, however, was only the first incident of violence.

She went to her mom’s house after that first terrifying event. He kept apologizing to her to get her to come back, and promised it wouldn’t ever happen again. “I believed him,” Teshana said.

Despite this, Teshana married him and the relationship seemed to be going good for a while. One night Cedric came home drunk while Teshana was in bed. He wanted to have sex with her when she didn’t want to, so he forced himself on her. At the time she didn’t think that a husband could rape a wife, and she also didn’t think anyone would believe her.

The next day Cedric acted like nothing happened, and shortly after that Teshana found out she was pregnant. She decided to stay because she didn’t want to raise the baby on her own, and she also believed that marriage should be “til death do you part.”

Another incident transpired while Teshana was still pregnant, after a day when Cedric had been unreachable. When he finally came home and wanted to talk, Teshana wasn’t receptive, which angered him. He knocked her out of her chair, then picked her up by the throat, and smashed her head into the wall.

She ran into their bedroom and called 911. He came into the room with a huge knife while she was on the phone with emergency services. She didn’t say anything to them yet, and he had the knife pointed at her. She was terrified. Eventually, the police arrived.

She missed the opportunity to testify against him because she didn’t know he would be in court the next day. The charges were dropped.

On the way to the accountant’s office one day to get their taxes done, an argument erupted over money. Teshana felt that Cedric was not contributing enough money to care for their family since he made more money than she did. Cedric, Tashana, and the two kids were in the car that day, and Cedric threatened to run the car off the road.

They arrived safe at the accountant’s office, where Teshana tried to send signals to the accountant that she wasn’t okay. She felt trapped in the situation.

Later, she was in the kitchen while Cedric was helping her daughter with her schoolwork. Teshana offered to help, and this set him off again. The next thing she remembered is being on the floor with Cedric on top of her, stabbing the floor and telling her he should just kill her. Remembering this took Teshana right back to the situation. She bursts into tears as she recounts the horrifying situation.

She doesn’t know how she was spared that day, he just left. After this, she just wanted to get out, so she moved herself and her kids to her parents’ house and filed for divorce and a protection order.

During a court appearance, Cedric did two cut-throat gestures. Teshana feels this was him trying to threaten them and stop them from going through with the order. Her father, who was there with her, alerted to court to these gestures. THe order was granted.

After the protective order was granted, Cedric immediately started violating it by texting Teshana suicidal messages. He also claimed she had a new boyfriend, which led Teshana to think he was stalking her at work and witnesses her getting lunch with her colleagues. She always felt he was there watching her all the time.

One day at work, her dad called Teshana to let her know he thought Cedric tried to break into their house. After that, Teshana found it hard to sleep at night because she lived in terror that he would break in. “It’s like being in a bad dream that you just can’t wake up from,” she says about that time.

One night she heard a car noise while she was on the phone with a friend. She recognized Cedric’s cousin’s truck through the blinds. She hangs up, and then hears someone approach the house. As they started to knock, she had the phone in her hand, ready to dial 911. Eventually, he left, but Teshana was left feeling completely unsafe.

Cedric had visitation with their son every other weekend at his parent’s house. He was always angry during these visits, and one time he threatened to kill them. Because of this, they moved visitation to the police station.

One day she picked her son up from Cedric at the police station, and he had her by the throat again. She didn’t expect this to happen because she thought she would at least be safe at the police station. Teshana blacked out again. She wakes up feeling a warmth in her head, and herself being moved. She didn’t know she was bleeding. The cops took Cedric in and Teshana had to go to the hospital to get stitches.

After this attack, Cedric was not legally allowed to see their son for two years, but he only served two weeks in jail. After he was released from jail, a police officer called Teshana because he was afraid of things Cedric had said about Teshana. There was nothing the police could do, so Teshana decided to move away to a place where he could hopefully not find her and her kids.

After a while, Teshana felt like maybe he would leave her alone. Then, one day in 2013 she got a call from a sister asking her if she and her kids were ok. Cedric had murdered a woman and a child, and her sister was concerned that it might be Teshana and her kids.

Instead, the victim had been his ex-girlfriend Roxann Sanchez and her sons. Cedric had stabbed all three of them. 30-year-old Roxanna and one of her sons, Anthony Figueroa, did not survive the attack. The other son, 12-year-old Marcus Figueroa, survived and was able to call 911. An 8-month-old baby, Isaiah, which was Cedric’s son with Roxann, was the only person at the scene that had been unharmed.

Marcus had survived the attack by imitating the noise his brother had made as he died, convincing Cedric that he was dead too.

Roxann and her sons were returning from a grocery trip to find Cedric waiting for them. They got into an argument, which turned physical once they got inside. After the horrifically brutal attack, Cedric called his cousin and let him know he’d murdered Roxann and that the baby was still alive. He got in Roxann’s car and tried to escape from Texas where the murder occurred to his home state of Illinois. Marcus had been able to call 911 after faking his death, so state troopers were able to apprehend Cedric before he made it over the Oklahoma border.

Teshana was sicked by this knowledge and kept thinking bout how this could have happened to her and her children.

Below is a photo of Roxann. Teshana breaks down as she looks at it. She wishes she could have warned Roxann. She says she’s telling her story because Roxanna and her son Anthony no longer have a voice. 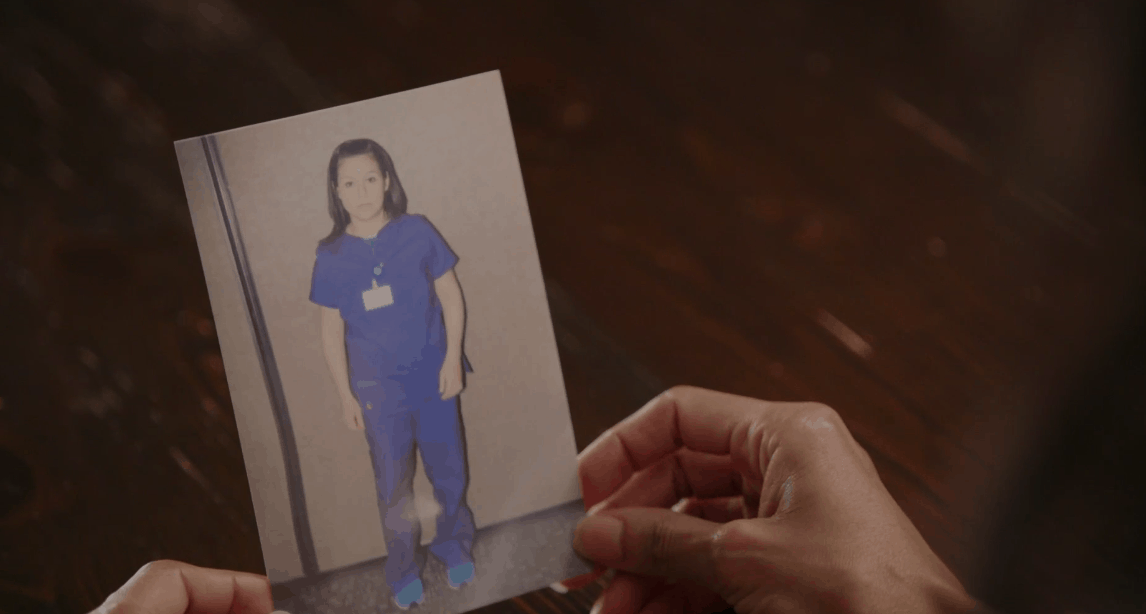 Teshana is left with both physical and mental scars from her experience with Cedric.

Cedric was given the death penalty, which made Teshana feel like it was too easy. She wants him to take responsibility for his actions.