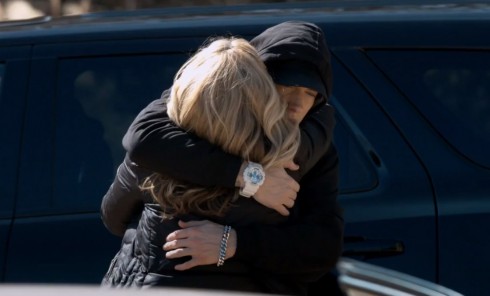 Eminem has had a complicated relationship with his mother Debbie Mathers, and he’s been pretty vocal about it in his songs throughout his career. In “Headlights,” the second-to-last song from his latest album Marshall Mathers LP 2, he makes amends. He took the opportunity of Mother’s Day to release the Spike Lee directed music video.

“Did I take it too far?/ ‘Cleaning Out My Closet’/and all them other songs/But regardless I don’t hate you ’cause/Ma, you’re still beautiful to me/’cause you’re my mom. /I love you, Debbie Mathers,” he raps on the song. The lyrics of a lot of his previous songs have called her a “selfish b**ch,” referred to her drug use, and expressed a great deal of hate towards her. Even though “Headlights” has a lot of love towards Eminem’s mom, it doesn’t whitewash their complicated and estranged relationship. It still takes his mom to taste for her drinking, not providing properly for her family, and kicking him out of the house into the freezing cold. He takes a lot of the blame in the song for overreacting and not behaving well in response to the situation they were both in.

He says a turning point for him was when his brother Nathan was taken from her by the state.

“And I was the man of the house, the oldest, so my shoulders carried the weight of the load
Then Nate got taken away by the state at eight years old,
And that’s when I realized you were sick and it wasn’t fixable or changeable
And to this day we remained estranged and I hate it though
‘Cause to this day we remain estranged and I hate it though
‘Cause you ain’t even get to witness your grand babies grow
But I’m sorry, Mama, for “Cleaning Out My Closet”, at the time I was angry
Rightfully maybe so, never meant that far to take it though,
’cause now I know it’s not your fault, and I’m not making jokes
That song I no longer play at shows and I cringe every time it’s on the radio
And I think of Nathan being placed in a home
And all the medicine you fed us
And how I just wanted you to taste your own,
But now the medications taken over
And your mental state’s deteriorating slow
And I’m way too old to cry, the shit is painful though
But, Ma, I forgive you, so does Nathan, yo”