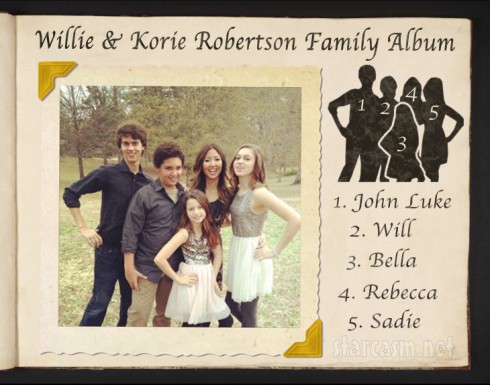 Sometimes it is tough to keep track of all the Robertsons. The eldest generation isn’t that big a challenge: Phil and Si might look alike behind those grey beards, but as soon as one of them opens his mouth, there’s no way to get them mixed up. The second generation is a bit harder to get straight, but not that bad, either. The brothers look a little alike to begin with, and then they grow those bushy beards that make them even harder to tell apart. But after a few episodes of Duck Dynasty it isn’t that difficult to tell bandanda’d Willie from lanky Jess from baby brother Jep. (If Alan ever shows up, he’ll be the clean shaven one!)

But, then there’s the third generation. That’s a real tangle. Not only do each of the brothers have a bunch of kids, but a lot of them look a lot alike. (Wille and Korie’s son John Luke and Jase and Missy’s son Cole share an uncanny resemblance, for example.) Here is your first lesson in the Robertson cousins, an introduction to Willie and Korie’s five kids: John Luke, Will, Bella, Rebecca, and Sadie. 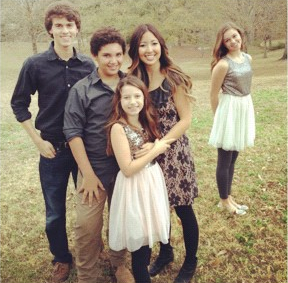 The eldest Roberston child is also the newest to the family, Rebecca.  In the photo above, Rebecca is on the right, but not all the way out to the right by herself.  Rebecca came to the Roberstons as an exchange student from Taiwan, but then became their foster daughter.  I suppose we shouldn’t be surprised that the Roberstons reached out to this lovely girl who must have been in real need of a family.  Looks like she hit the jackpot when it comes to parental love and support.

John Luke is on the far left of the group in the shot above.  He’s the eldest boy and the one who has been on Duck Dynasty  most often.  We’ve seen John Luke on a date (chaperoned by Granddad, Phil), playing video games with cousin Cole, and generally hanging around the house during filming.  Maybe John Luke is a good actor, but I think it is much more likely that he is a genuinely impressive young guy.

Sadie is the one all the way off to the right by herself in the photo above.  Below, though, she’s right in the middle.  Sadie’s been right in the middle of Duck Dynasty, too.  We’ve seen her cook with her grandmother, Kay, and climb under the house for her granddad, Phil.  But, getting driving lessons from Uncle Si provided her most memorable screen time.  Its good be a Robertson, but that doesn’t mean its always easy! 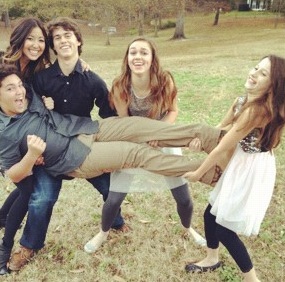 Will is the one trusting his siblings in the photo above not to let him hit the ground.  He was the third Robertson child to join the family, adopted at birth before Bella was born and before Rebecca joined the family.  Will shows up on camera now and then, but we haven’t heard much from him yet.  Let’s hope that changes soon, because we’d love to get to know Will a little better. 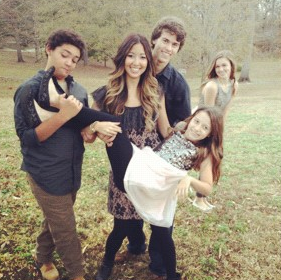 And then there’s the youngest, Bella.  I simply can’t imagine what it must be like for her to be the baby in this big family. She seems to be holding her own, though, in these photos. Let’s hope we get a chance to get to know her on the show, too.

PHOTOS Duck Dynasty in Hawaii! The Robertson family surfing and sunning in style

Duck Dynasty’s Phil Robertson doubles down: I will not back off from my path