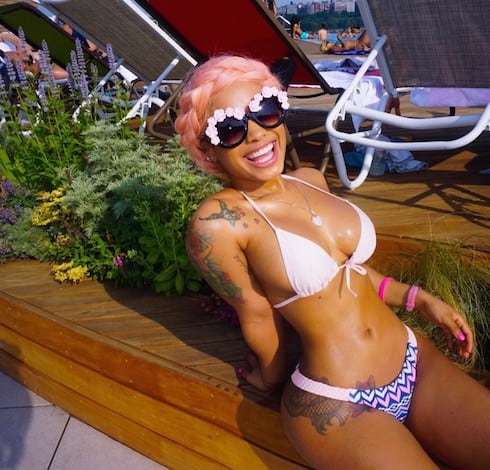 Love & Hip Hop New York, the longest-running installment in the franchise, is back for its world-beating eighth season. VH1 has just announced the full cast–including the widely anticipated newcomers–and the Dreamdoll LHHNY addition is the most talked-about.

That might come as no surprise to fans of reality TV in general, many of whom appear to remember Dreamdoll (real name Tabatha Robinson) from her short-lived but widely discussed appearance on Bad Girls Club Season 16. Tabatha was given the boot after just two episodes, thanks to her bullying of fellow BGC castmate Kallie. In case you missed her appearance, here’s a fan-made highlight reel:

Though she was known primarily Tabatha during her Bad Girls Club phase, it appears that the 25-year-old went through something of a transformation a few years ago, when she created the “Dreamdoll” persona and began adapting it more and more. The bio from her official web site–you can see it in context here–mentions something similar:

MOTTO: “Talk to me nice,or don’t talk to me twice.”​
Tabatha Robinson created a character professionally known as Dream Doll 4 years ago, Straight out the Bronx, NY. Born February 28 (age 25). Dream Doll always knew she was destined to be on your TV screen and now, Radio airwaves. Graduated from Bronx Academy Highschool later attended Westchester College as well as Herkimer Community College majoring in Business Management. Dream Doll later popularity grew after her starring on Oxygen’s Bad Girls Club Season 16 with her short appearance fans loved her and other opportunities fell at her desk. Now she is the first Female GWININ Artist signed to Dj Self’s GWININ ENTERTAINMENT, doing shows and hosting all over the world with her hit single “EVERYTHING NICE”Check her out live on Power 105.1 every Tuesday and Thursday for ladies night. Stay tuned to Dreamdoll’s journey. Mixtape coming soon !!!! TALK NICE

So, as you may have guessed, the Dreamdoll LHHNY connection does indeed begin with DJ Self, a supporting member of the cast for the past two seasons. In addition, the self-proclaimed “Prince of New York“‘s connections at Power 105.1 appear to have helped Dreamdoll land her own radio show.

It’s worth pointing out, though, that Dreamdoll was openly speculating last year about how her relationship with then-boyfriend Tory Lanez might get her in front of the LHHNY cameras. Tory appeared to drop a diss track about Dreamdoll earlier this year; she took the high road by responding with success: Dreamdoll’s first-ever mixtape was just released to solid reviews (and an attention-grabbing cover):

Subscribe to my soundcloud all 12 songs from #LIFEINPLASTIC available ✅

Dreamdoll kept up the heat with “Everything Nice,” her tape’s debut single–which has similarly eye-opening cover art. Here’s the track:

In addition to her budding reality TV and hip hop careers, Dreamdoll has her own line of clothing. And she keeps things literally on-brand by marketing her very own brand of actual dolls, which you can buy for your little ones or for yourself right here.

Based on everything we’ve been hearing, it seems like the Dreamdoll LHHNY storyline will be one of the show’s most prominent this season, so you’ll definitely want to keep up with her on social media. You can follow Dreamdoll on Twitter here and on Instagram here; she’s also just launched her official YouTube channel.