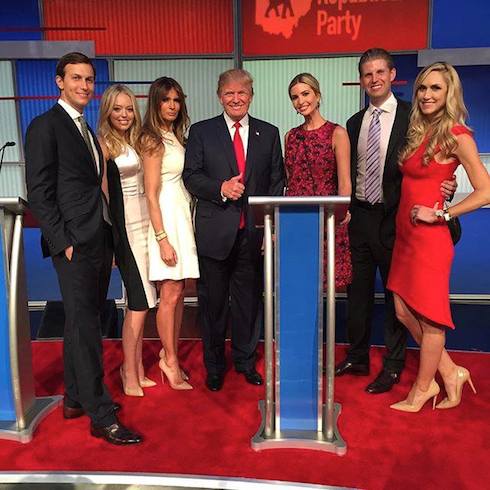 Last night, ten of the seventeen candidates for the Republican nomination for President took to Fox News’ stage at the Quicken Loans Arena in Cleveland for a prime-time debate. Because there were ten candidates onstage, and only two hours devoted to the event (minus commercial breaks), no one got to speak for long, and every statement was magnified. And perhaps no candidate’s words were more magnified–or more widely anticipated–than those of current front runner Donald Trump.

It was perhaps predictable, then, that some Trump-based controversy would arise in the wake of the debate, regardless of what happened onstage. Currently, that controversy has manifested in the form of the next great Donald Trump feud–namely, the bone Trump has to pick with Fox anchor Megyn Kelly, who directed a few questions at Trump that Trump says were unfair, and showed terrible bias.

Here’s the first question Trump got from Kelly:

“Your Twitter account has several disparaging comments about women’s looks,” Kelly said, as part an overall question regarding Trump’s views on women. “You once told a contestant on Celebrity Apprentice it would be a pretty picture to see her on her knees. Does that sound to you like the temperament of a man we should elect as president–and how will you answer the charge from Hillary Clinton, who is likely to be the Democratic nominee, that you are part of the war on women?”

Trump’s answer had to do with political correctness–namely, that he doesn’t have time for it. He concluded, though, by saying “And honestly Megyn, if you don’t like it, I’m sorry. I’ve been very nice to you, although I could probably maybe not be, based on the way you have treated me. But I wouldn’t do that.”

After that, the post-debate spin room was the first place Trump took issue with Kelly’s questioning. It was there that this Donald Trump feud began:

Then, the pace of the feud really picked up. Between midnight and six this morning, Trump’s Twitter feed exploded, filling up with tweets from both DT himself as well a series of heated re-tweets, all of which took Kelly to task. Here’s a sample:

I really enjoyed the debate tonight even though the @FoxNews trio, especially @megynkelly, was not very good or professional! — Donald J. Trump (@realDonaldTrump) August 7, 2015

“@Reid2962: @realDonaldTrump @FoxNews I expected better from @megynkelly, wondering what is her hidden agenda.

“@joshuapantoja: @megynkelly @FrankLuntz @realDonaldTrump you tried to attack Trump, he took it and smiled. Trump will be the next president

.@realDonaldTrump: That [pledge] question was aimed at me, which I didn’t think it was appropriate https://t.co/GWLg8BRcOc — FOX & Friends (@foxandfriends) August 7, 2015

What do you, the viewers at home, think? Did you watch the debate? Is the Donald Trump feud justified?