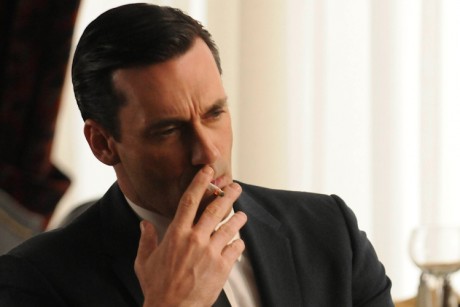 This is the elephant in the room for Don Draper is his health, and the show’s creators are leaving clues that suggest Don Draper’s smoking and drinking have finally caught up with him. While he’s busy living in a quiet desperation, his body might be finally rebelling against him after all the cigarettes, the booze, the long hours working, and of course the massive stresses of a bad childhood, war, divorce, and of course, secretly taking over someone else’s identity.

Here are the reasons why I think Don Draper is suffering from lung cancer, emphysema, or some other illness brought on by his dangerous 1960’s Ad Man lifestyle:

1. He smokes all the time, and refuses to give up cigarettes. His ad agencies were carried for a long time by Lucky Strike. When that relationship went away, Don Draper wrote a cynically righteous advertisement to explain why they were turning their back on Lucky Strike. He spoke about the dangers of smoking cigarettes, and vowed that because of that Sterling Cooper Draper Pryce would never work with another cigarette company. But Don Draper never intended to quit smoking himself, thus illustrating that he while he very deeply and eloquently understood the dangers of smoking, he still felt he could stay one step ahead of it, just like everything else in his life. It would be fitting (and maybe too obvious) that Don Draper would fall to the dangers of Lucky Strike. Don is also very tortured, and all the smoking and drinking probably play into a self-destructive nature. He knows he’s playing with fire, and that’s exciting, but at the same time he’s sort of resigned to it. He tries to combat his dark moods by going swimming, or marrying a girl who fits into a picture of who he thinks he wants to be, but ultimately he’s a man falling apart.

Now, although 90% of lung cancers are caused by smoking, only a small percentage (less than 10%) of even heavy smokers get cancer. That’s no reason to light up because smokers are at a much higher risk to develop lung cancer than non-smokers, and there’s a whole smorgasbord of other diseases that long-term smoking can contribute to, like emphysema (which Amy Winehouse showed early signs of in her early twenties.) Smoking also ups your risk for many other types of cancers, cardiovascular diseases, and chronic bronchitis, to name a few.

2. He’s been coughing lately. In one episode he actually had some sort of cold or flu, and hallucinated about killing a woman, so implied his coughing might be just related to fleeting illness. However, in last night’s episode, he started coughing again after a scuffle with wife Megan. There’s something very portentous about that cough.

3. In interviews creator Matthew Weiner always skirts around the issue of the series ending with his own anxieties about ending things, but Jon Hamm told Vulture.com that he knows exactly what’s in store for Don Draper, and he can’t wait to share the story with us. Jon Hamm has also said that on the show Don is slowly being eclipsed by the younger people in the agency. Even if Don dies, or is severely incapacitated, that doesn’t necessarily mean that the show will have to end. But would it be as good? The Office is carrying on without Michael Scott, albeit on mostly shaky legs. Whether or not this speculation of mine is even close to what is going to happen, it would still be great to continue to really explore Peggy Olson, and her character might be able to fill Don Draper’s shoes. She’s dealing with a lot of the same existential issues as Don, even though their life experiences are so vastly different. The truth is you don’t have to be committing a high level identity fraud conspiracy to be at war with yourself.

Something does have to give with Don, he’s shed so many of the things that defined the “character” he was trying to be, but he still has himself to face. We’ve known from the beginning that Don Draper is a falling man.

Do you think the show will go this route with Don, or is it just a tease? AMC already has a critically acclaimed drama about a man fighting with both lung cancer and himself, Breaking Bad, will it now have two? Maybe they could merge into Breaking Mad Men.

Is Jon Hamm’s girlfriend trying to get him to wear underwear?