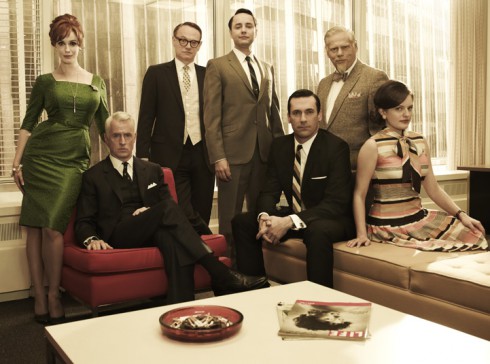 Mad Men took its final bow last night. The show wrapped up seven seasons and eight years by attempting to answer the question at its very core: Who is Don Draper? And can he ever be happy?

The show didn’t go full Sopranos and destroy us with ambiguity. But it did–perhaps unsurprisingly–leave us wondering exactly what we’d just witnessed.

Before that, though, a bunch of stuff happened to all those other people the show shows us from time to time. Many of their stories were effectively wrapped up last week, or even farther back. (Surprise! Betty still has cancer.) We did get a beautiful final scene between Peggy and Pete, though, and a heart-wrenching last exchange between Peggy and Don over the telephone.

In fact, three pivotal final encounters–one from Don to Peggy; the others from Sally and Betty to Don–took place over the phone, via the “Person to Person” collect calls that gave the episode its name. It was an odd, yet effective way for Don, who’s always been able to abandon anything at any moment, to say goodbye to three characters who’ve meant a great deal to him.

So, what happened? Well, Pete and Trudy flew right in the face of rampant speculation that they would break up in the finale. Nope–they’re still getting back together, and still leaving New York for Wichita: 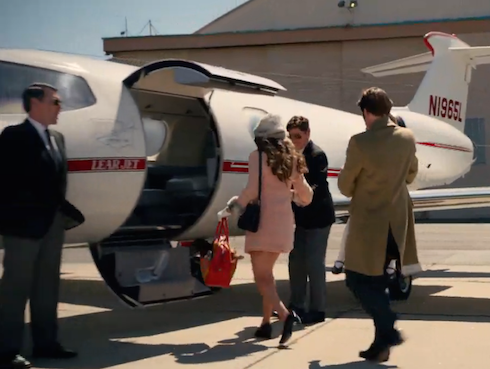 Joan has a teary breakup with three-episode fling Richard, who, ultimately, can’t be with anyone who wants to have anything to do other than gallivant about and snort coke out of his fingernail. (No, really.) He was willing to accept the fact that Joan has a small child, but, when she told him she wanted to start her own business, he took off. On the upside, Joan now owns her own production company:

Roger willed half of his money to his secret son, and the other half to his soon-to-be French wife Marie. At least one (potentially) happy marriage came out of the Draper-Calvet union: 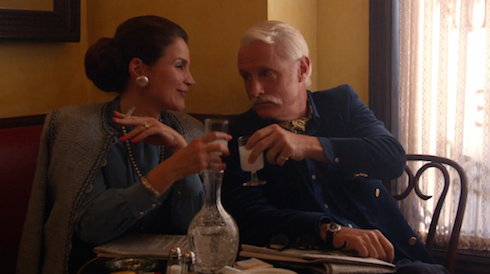 Betty is still going to die. (Sorry, Betty.) But she is still Betty, and hasn’t given up smoking. (Yay, Betty?) And Sally is her primary caretaker for the next few months. (Sorry, Sally.) But she’s sure to inherit part of whatever Betty got in the divorce from Don–plus Henry will take care of her until she’s out on her own. And she’ll get whatever’s left of her father’s millions whenever Don finally kicks off. (Yay, Sally!) But, because she was raised by Don and Betty, Sally will always have an emptiness inside of her too vast for even a speed racing car shaped like a jet to traverse. So, sorry, Sally: 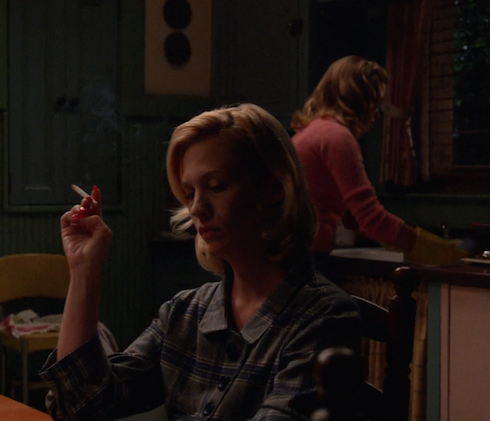 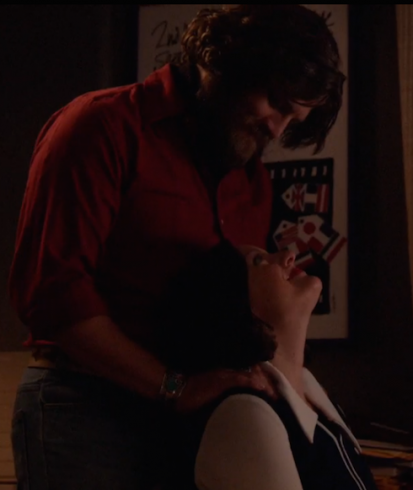 And so we arrive at Don. He spends a fair amount of this episode being called Dick–he’s back in California, after all, and California is where he’s always been more like his real self than the person he is in New York. He also spends most of this episode having an emotional breakdown, now that he’s finally estranged from everyone he’s ever loved at a Draperesque distance in his entire life. (Being told that it’s not necessary for you to come home and take care of your kids now that your wife’s dying, since if you stay in California you’ll be in their lives just as much as you always have, will probably do that to anyone.) 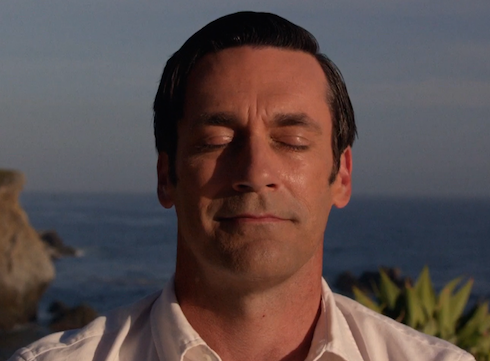 The episode culminates with Don breaking down in a sort of group therapy session, and then meditating with the same group on the coast as the sun rises. He chants a deep “Om;” he smiles. And we dissolve very slowly from Don’s smile to the famous “I Want To Teach The World To Sing” Coca-Cola ad. Which, in real life, was produced by real life advertising firm McCann-Erickson–the same one that bought fake Sterling Cooper on the show–in 1971. And this episode of Mad Men ends in November of 1970.

So, the show’s suggestion would seem to be that Don once again fled unexpectedly to California (he’s done this in seasons two and four, and was living there temporarily at the beginning of season seven), where he once again cleared his head, centered himself, and returned to New York and advertising glory. There’s a definite pattern to Don’s life, and the two American coasts are at opposite ends of it.

Except that that interpretation sort of undercuts a lot of the work of the last few episodes–doesn’t it? Don fled the Miller Beer meeting at McCann because he didn’t want to be another creative director at an agency that had too many of them. He didn’t want what McCann promised–either in season one, when they tried to woo him away, or in seven. The vision of the jet flying over Manhattan prompted him to drop everything and disappear for a couple of months. If he then returns to New York and the life he already had, only to take what he learned from his time on the coast and turn it into a Coke commercial, did he really learn anything at all? Was he ever supposed to? And, if that’s true, is the allegedly happy ending of “Person to Person” just a ruse?

What do you think? Did Don ever go back to McCann? Was Peggy, who knows everything about Don, the one really responsible for the legendary Coke ad? Or did something else happen? What did you think about the Mad Men finale?

SPOILERS How is Mad Men going to end?