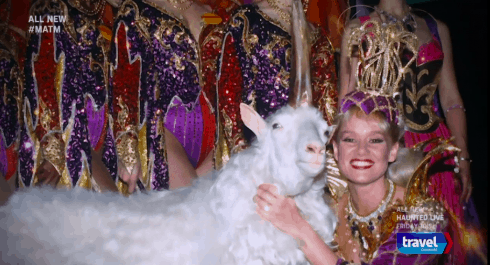 This week’s episode of Travel Channel show Mysteries at the Museum goes to the Ringling Bros. Circus museum in Sarasota, FL to explain the story of one of its most enchanting curios.

In the 1980s, the Ringing Brothers Circus claimed they had a real, live unicorn. In 1984 star unicorn Lancelot and his “brothers” debuted at Madison Square Garden to the tune of “Rocky.” Of course, the world fell in love with Lancelot immediately — but his existence raised a lot of questions.

Unicorns are legendary creatures that date back to ancient times in several different cultures. The figure of a horse with a single horn on its head usually symbolizes peace and innocence, and the horn is often thought to have special healing powers, or have the ability to make undrinkable water potable with a single touch. 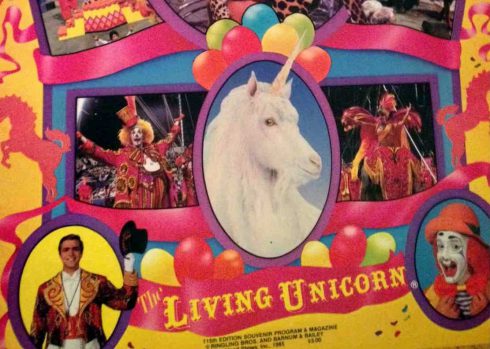 Although humans are entranced by the idea of unicorns, in modern times, most people don’t believe they are real. However, when Lancelot debuted as part of the circus in the ‘80s, Ringling Bros. Vice President Allen Bloom claimed the animals were authentic and magical. “They are the only unicorns in the world. They’re priceless,” he said. “They are all males, and I believe they’re brothers.”

Bloom also claimed that they were “ageless,” so it was impossible to tell how old they were.

The ASPCA wasn’t buying Bloom’s tale and worried that the ornamental horns were hurting the animals involved in the show.

To prove naysayers wrong, Ringling had Lancelot’s head X-rayed. Amazingly enough, the results showed that his horn was actually a part of Lancelot’s skull. There was nothing tying it to his head. So..did this mean unicorns really exist?

It turns out that, technically, Lancelot WAS a real unicorn. He wasn’t a mythical ageless creature, though: he was a goat whose two horns were bound when Lancelot was still a kid, fusing them together as they grew over time. The single horn was the master plan of self-proclaimed wizard Oberon Zell, who became so obsessed with unicorns that he wanted to make one of his own.

Zell read up on the work of 1930s biologist Franklin Dove, who had discovered a way to perform a surgical operation on kids when they were less than a week old. At that part of development, the horns are still part of the baby goat’s skin, and are not yet connected to the skull. Stitching the two horns together towards the center of the head forces them to grow together as a single “horn.”

Why are engagement rings usually diamond?