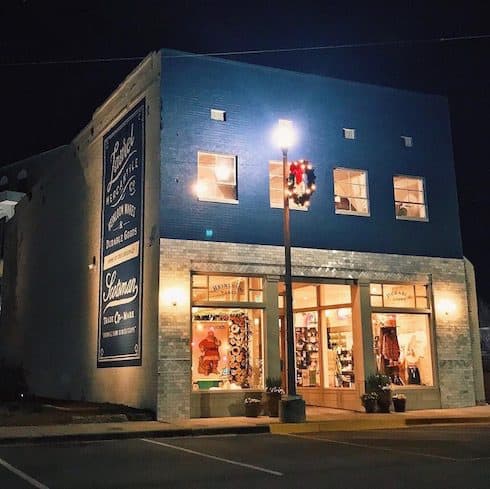 The stars of HGTV’s Home Town rep their own home town of Laurel, Mississippi as hard as possible on the show, employing local craft and tradesmen for nearly every job and featuring local businesses in every episode. But do Ben and Erin Napier have a store of their own? As it turns out, they have two: the Laurel Mercantile in downtown Laurel, plus the Scotsman General Store in the same building as Ben’s woodshop.

And, as we explained in our Home Town Season 3 preview a few months back, Ben has paired with Virginia-based Vaughn-Bassett Furniture Company to develop his own line of furniture. Since that furniture is now available nationwide, you might say that Ben and Erin have *three* stores (even if one of them is a “storefront” in a different sense).

So here’s a rundown of the three of them, along with how you can shop each one.

Do Ben and Erin Napier have a store? What is the Laurel Mercantile?

The Napiers’ first enterprise was Lucky Luxe, a stationary company that gained some viral fame for their wedding stationary. It was Lucky Luxe that helped bring Erin and Ben’s aesthetic to the attention of several noteworthy bloggers, culminating in a handful of magazine features on their own home.

Thanks to Home Town‘s success, however, Lucky Luxe has been on hold for several years. (To give you some idea of how long, their webpage informs visitors that the Napiers are “taking a break from stationary” in order to hilm Home Town Season 1.) Since then, Erin and Ben’s main brick-and-mortar jam has been the Laurel Mercantile, a recreation of Laurel’s once-proud “bastion of commerce,” originally open from 1901 until the mid-20th century.

We like the whimsical feeling of our store on rainy days. People take their time to look and explore & are in no rush to face the weather again. Talking and enjoying company is what we do best at LMCo. and Scotsman General so come on down and enjoy this rainy day with us or shop at laurelmercantile.com! ☔️ #americanmade

Because Ben and Erin weren’t busy enough, they opened a cozy little throwback general store behind Ben’s woodshop a few months ago. The Scotsman General Store is intended to be just that: an homage to another era, complete with the Napiers’ own spin. We’ll let Erin paint you the picture:

You’ll be able to buy glass bottle sodas, fresh cheese and milk, candy cigarettes, fancy artisan marshmallows, hammers, duct tape, Mississippi-made gelato, flannels, live bait. Your kids can reach deep into our coolers and pull out candy colored drinks and watch through the glass while Big and Josh and Jesse and Cody build furniture for an episode. You can play checkers on our marble checkerboard and rock your babies beside the fireplace, and you can be homesick for something you’ve never done before, something from a time before you were born. It’s nothing fancy, and that’s just fine.

Have you visited our Scotsman General Store? We’ve got all your goods here, you name it —Big Ben’s coffee, Delta Grind grits and rice and Cafe Du Monde beignet mix for the late nights and early mornings. We’ve got your outdoor and hardware needs— Scotsman hammers, the best dang wood shop signs, nails and even live bait for those who don’t play with that fake fishing stuff. We play George Strait and Hank Williams 24/7 and eat quarter candy and boiled peanuts while we work. There’s nothing quite like this place. Come on over and see it! ??

Where can I buy Ben Napier’s furniture?

Like Joanna Gaines before him, Ben Napier has used his reality TV fame to his long-standing furniture dream come true. Ben actually has two separate lines through Vaughan-Bassett: The LMCo. Home Collection is “modeled after handmade pieces created in Ben’s Mississippi woodshop as seen on HGTV’s Home Town,” while the Scotsman American Heirloom furniture is a specific bedroom suite.

Ben and Erin recently sat for an interview with The Manufacturing Report and talked about their latest endeavor at length. Ben explained that because he was designing the pieces as he was also creating furniture for Home Town Season 3, we basically get to watch the two furniture lines come to life in the new episodes.

“A lot of the furniture that’s in the collection, I got to design and build on the show, and now it’s actually a part of our collection,” Ben explained. “Viewers and homeowners will be able to see the furniture made from start to finish, and then go out to their retailers and buy it.”

Ben and Erin also spoke passionately about their appreciation — both personally and professionally — of skilled labor. It was important that their furniture be made in America and in a small town because both Ben and Erin know how big a deal a major employer and steady work are for places like Laurel. (The conversation also touched on whether the need for skilled laborers is dying off.)

“We’re employing hundreds of people on our show,” Ben said, “and the smallest [number] is the camera people, the accountants…the biggest thing is the plumbers, the electricians, the painters, the carpenters. Those are the guys who are making a lot of money — they’re making a killing — and we have to have them.”

“The show doesn’t exist without the skilled trades,” Erin added.

“We’ve talked to people in bigger cities who are making shows and there’s such a shortage of tradespeople,” Ben went on. “I won’t name the show, but there’s one show that one of our good friends works on, and the show almost didn’t happen because there’s such a demand for skilled tradesmen that they would get offered $20 more an hour to leave that project and go work on another project. And they would! They’d tell the production company, ‘Hey, we’ve got to go, we’re sorry, we can’t finish this.'”

Here’s Ben and Erin’s interview with The Manufacturing Report in full:

To visit and shop at the Laurel Mercantile or the Scotsman General Store, check out their official pages here. And to see a map of furniture dealers carrying Ben and Erin’s latest work, click here.

(Photo credits: Do Ben and Erin Napier have a store via Instagram)