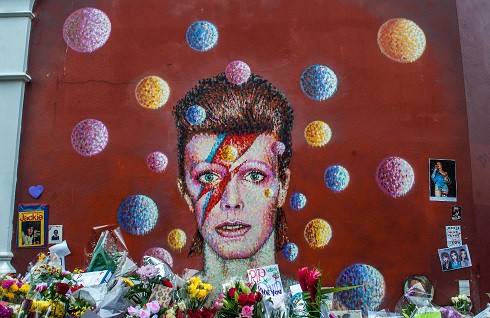 The world lost a true legend last week when David Bowie, 69, passed away of cancer. Heartfelt tributes have since poured in, but none seems more fitting than the Sunday announcement by Belgian astronomers who say they’ve registered a lightning bolt-shaped constellation in Bowie’s honor. The news quickly spread through social media, especially after Bowie’s longtime friend and collaborator Brian Eno tweeted about it:

David Bowie Tribute: Starman Gets His Own Constellation https://t.co/dIsNFAfR8Z pic.twitter.com/KzqVWJAfKx

The Guardian noted that, oh-so-appropriately, the new constellation “sits in the vicinity of Mars.” Bowie was famous for his extra-terrestrial bisexual rockstar persona Ziggy Stardust, as well as iconic hits “Space Oddity,” “Starman,” “Life on Mars?” and “Hallo Spaceboy.” Philippe Mollet, head of the MIRA Public Observatory in Belgium, described the collaboration with Belgian radio station Studio Brussels:

It was not easy to determine the appropriate stars. Studio Brussels asked us to give Bowie a unique place in the galaxy. Referring to his various albums, we chose seven stars—Sigma Librae, Spica, Alpha Virginis, Zeta Centauri, SAA 204 132, and the Beta Sigma Octantis Trianguli Australis—in the vicinity of Mars. The constellation is a copy of the iconic Bowie lightning and was recorded at the exact time of his death.

While it’s a touching tribute to one of the universe’s greatest artistic talents, it turns out that you can’t actually create a new constellation. There has been quite a bit of confusion since this story came out, but National Geographic clears things up:

There is simply no mechanism to replace or name new constellations. The entire sky has already been divided into 88 constellations with well-defined celestial borders than span the entire celestial sphere. This set of constellations is recognized by the International Astronomical Union, the official naming body of scientists.

So, if the Starman’s lightning bolt-shaped “constellation” isn’t a constellation, what is it? It’s called an asterism, as NatGeo explains:

Alas, even the location isn’t quite accurate, according to NatGeo experts:

It’s misleading to say the lightning bolt shape is ‘in the vicinity of Mars,’ as stated in the online announcement. The red planet actually is in constant motion in our skies, with movement visible in just a matter of days. While stars are so far away that they appear not to move for many millennia to the naked eye, planets orbiting the sun do visibly glide across our night sky.

While the Starman asterism isn’t an official constellation, there is no doubt that it is a meaningful way to remember one of our favorite creative souls. The group behind the naming has created a website, Stardust for Bowie, where you can tag your favorite song and leave a personal message about what Bowie meant to you. But, don’t worry–Bowie isn’t out of the running for celestial remembrance yet: a mile-wide asteroid between Mars’ and Jupiter’s orbits has borne the official name of 342843 DavidBowie since January 5, 2015. You can even track it at NASA.