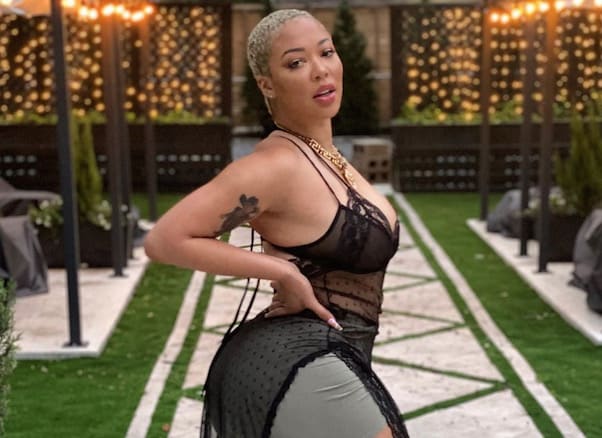 Former Basketball Wives star and renowned DJ and dancer DJ Duffey just added another item to her list of accomplishments. When DJ Duffey and Tory Lanez got together for a Quarantine Radio IG Live clip, the resulting twerk heard ’round the world nearly crashed the entire platform!

In fact, it might be fair to say that Duffey is actually best-known for her legendary twerking at this point, and that her time on Basketball Wives is the thing that gets her the second-most recognition. Since her time on the show came to an end, she’s been hustling as a DJ and headline dancer for French Montana, building her Instagram following into the seven figures.

Tory Lanez, meanwhile, has been making bigger and bigger noise with his #QuarantineRadio series over the last few weeks. As The Jasmine Brand reported, he recently broke the record for most viewers on a single stream with 310,000. And Lanez has been pulling in the names: Drake, DMX, and even Justin Bieber have dropped in over the last few days.

In short, the opportunity for someone to crash IG Live was sitting right there. And if anyone was going to do it, it was going to be Lanez. So you’ll understand the response to the vid below, in which DJ Duffey and Tory Lanez get together for a little pants-free twerk-and-response:

That brief interlude got Tory Lanez and Quarantine Radio both trending #1 on Twitter for the entire afternoon. DJ Duffey got plenty of love, too, peaking just outside the top ten on the platform. (No doubt she’d have been even higher on Instagram if the app offered a similar list.)

But we’ve got to give props to one of the other big names to drop in. In addition to DJ Duffey and Tory Lanez, Love & Hip Hop star Alexis Skyy also dropped into the stream and dropped trou:

Alexis Sky really hopped in Tory Lanez live. He officially the goat for this ?? pic.twitter.com/ZJbMCl0HIZ

#QuarantineRadio was supposed to come back today (Monday 4/6). Unfortunately for fans of celebrity gossip and / or legendary twerking moves, Tory has just announced that he’s having to move the next stream back to Tuesday. He didn’t give an explanation for the move, except that it gives followers another day to get hyped for what may come next 😉