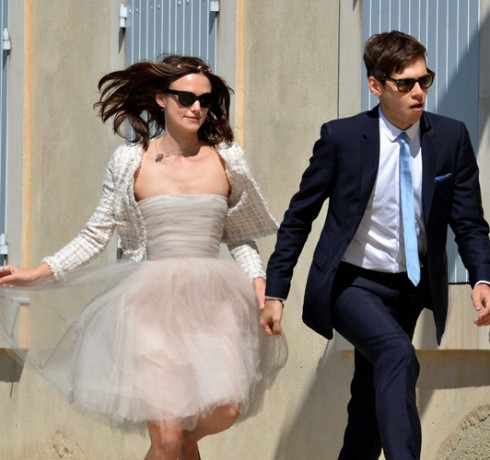 Whereas many celebrities goff at wearing the same ensemble twice in their lives, Keira Knightley thumbed her nose at tradition by wearing a Rodarte dress for a second time — to her own wedding.

Now, The Sun is reporting the famous actress’ decision may have been driven by her middle-class budget: “Accounts just released show that despite being one of the highest-earning actresses in the world, the star paid herself just £30,000 ($45,285) last year.”

Because of her tight budget, Keira’s records show she didn’t pay for a personal trainer and didn’t spend on new clothes.

Keira’s frugality isn’t a recent development. Back in 2010, the multimillionaire spoke of her distaste for spending money.

“Oh, I do like shopping, but only sometimes,” she said. “The other day I wanted to buy a Burberry coat. I went into the shop, tried it on, looked at the price, nearly died, and then bought it! It was so much fun, but I still have to tell myself it’s OK to do that — isn’t that mad?”

Even though she’s the daughter of an award-winning playwright and British actor, Keira seems reluctant to accept her earnings.

“I wasn’t enjoying what I was doing and I felt terribly guilty about that. I remember hating the idea that I was in a privileged position and couldn’t see the point of any of it,” she said.

PHOTOS The Real Housewives of Miami before the fame